Vibrating shoes help the blind get around.

A specialized shoe insole that vibrates when wearers are supposed to make a turn is due to ship out soon and its inventors predict it will be a gamechanger in more than one market. Lechal, which means “let’s go” in Hindi, will deliver thousands of insoles and customized sneakers to the visually impaired, as well as to runners and other athletes.

On the heels of last fall’s collaboration, which resulted in a 90 percent sell-through, Nine West and InStyle have come together again to launch a complete accessories collection for spring. Hitting stores tomorrow, the collection combines InStyle’s industry insight with Nine West’s footwear and accessories expertise to bow an array of shoes (18 of ’em), clutches and cuffs. Retailing from $70 to $109, the collection will be available at all of Nine West’s U.S.

Skechers Foundation makes its largest ever donation to children with special needs.

The Skechers Foundation celebrated its fifth annual Pier to Pier Friendship Walk on Feb. 27 by presenting its largest ever donation totals in the history of the walk: $318,000 to The Friendship Circle–a non-profit organization that assists children with special needs and their families–and $492,000 dedicated to six education foundations.

Vans and the ASPCA get their kicks on.

Vans has teamed up with the ASPCA to offer animal lovers the chance to support their furry friends in a sartorial way with shoes, shirts and accessories covered in cats and dogs. The seven-piece collection includes an oll-over cat collage on Vans’ classic silhouette, the Authentic, while the Sk8-Hi Slim uses puppies on each quarter panel. To celebrate the collaboration and raise awareness, custom sock-liners in orange–a color that represents animal abuse prevention–with ASPCA logos are found in the foot beds of all shoes.

Forget “The Bachelor.” If you’re after a match made in heaven look no further than Georgia Boot, creator of the original logger boot, and Stihl Timbersports, which showcases the world’s best lumberjacks.

The bestselling sneaker of all time is back.

Billed as the show for quality fashion at a low price, Offprice returned to the Sands Expo & Convention Center in Las Vegas this month and didn’t disappoint, according to Stephen Krogulski, chief executive officer of the show. More than 500 exhibitors, many carrying product at up to 70 percent below wholesale, gathered in 132,000 square feet of floor space, and retailer attendance was up 6 percent from February 2013, climbing above 8,000 for the first time in six years.

Asics Gel-Lyte gets a new look for the Los Angeles Marathon.

Asics has taken a leaf out of the Hollywood handbook for its limited-edition Gel-Lyte33 3 in celebration of the athletic brand’s sponsorship of the 2014 Los Angeles Marathon on Mar. 9, which has sold out for the second consecutive year and the third time in its 29 year history. Just like the city takes a liking to skinny celebs, the running shoes weigh a mere 6.8 oz.,  while the uppers are inspired by the palm trees that line Sunset Boulevard.

When it comes to summer music festivals, what you wear is just as important as the music. On the heels of releasing its line-up for 2014, Bonnaroo Music & Arts Festival announced that Teva would be the official sandal sponsor. “The simplicity, utility and freedom of sports sandals make them the ideal footwear for summer festivals,” says Lucas Martinez, Teva’s marketing manager.

Actress and style icon Sarah Jessica Parker is hitting the road for the launch of her new line, SJP Collection, debuting this Friday exclusively at select Nordstrom stores and online at Nordstrom.com. Parker’s first stop on the promotional tour will be her hometown of New York, where Nordstrom will host a pop-up shop from Feb. 28-Mar. 2. After that the former “Sex and the City” star will head to Seattle for an appearance at the retailer’s national flagship on Mar. 5, followed by stops in Los Angeles, Chicago, Miami and Dallas. 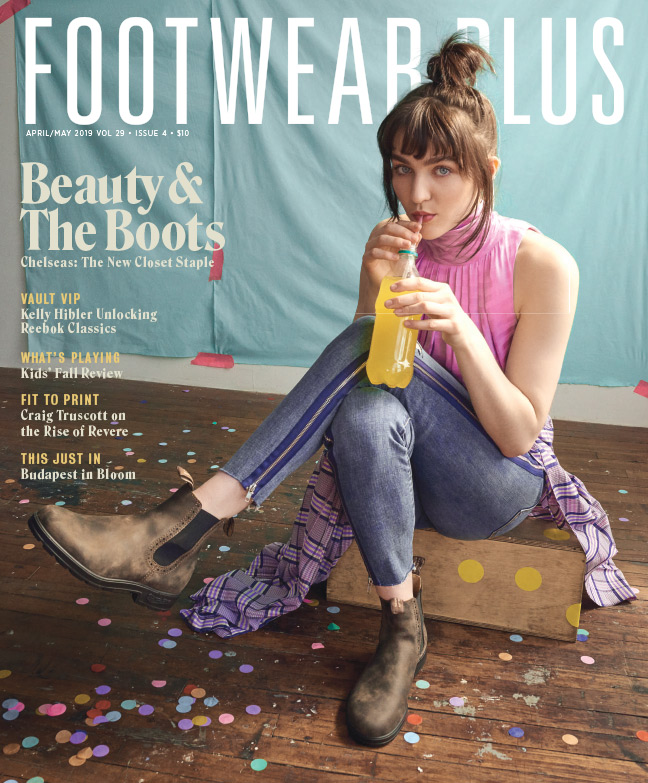