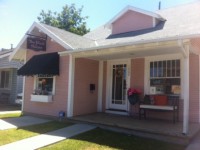 What’s Selling at The Pink House in Sacramento Opened in October of 2002, Sole Shoes & Accessories is Atlanta’s go-to destination for an on-trend collection of footwear, accessories and, as of four years ago, apparel carefully curated by owner Abigail Lignugaris. “I keep my price points relatively low to make them affordable for my customers,” she says. “You could walk out dressed in a full outfit for around $350.”

Everything’s bigger in Texas, and that’s certainly the case at Gregory’s, a 5,800-square-foot shop carrying a vast array of designer shoes, clothing and accessories for men and women. Opened in Dallas in 1989, Gregory’s has expanded to include locations in Houston, Las Vegas and Los Angeles (via acquisition of Fred Segal Feet this year), with an Atlanta outpost set to open next year. Thanks to unique labels like Amaranti, Massimo Dogana and Diego Dolcini, the shop’s owner, Jon Harris, says the store has “cultivated a cult following.”

What’s Selling at Shoes on First

Northern California’s picturesque Napa Valley is home to Shoes on First, a 2,600-square-foot, independent retailer with a diverse brand list and an even more unique clientele. Regular customers include David and Victoria Beckham, Nicholas Cage, tourists in search of shoes (and wine) and upper-crust locals. “We have a large and faithful following across the U.S. and Canada,” says owner Phil Aved of his 12-year-old business. “I even have some repeat customers in Japan that I send shoes to.”

What’s Selling at the Shoe Parlour

Family owned for more than 25 years, the Shoe Parlour claims to hold the largest footwear selection per square foot in midtown Manhattan. Located across the street from the celebrated Carnegie Deli, the 1,300-square-foot store sells leading brands to locals and tourists alike, including Ugg, Hunter, Dansko, New Balance and Sorel, says CEO Jason Rogowsky. “Our customers come from all over the world and we offer that personal service where everyone feels like family when they walk in the door.”