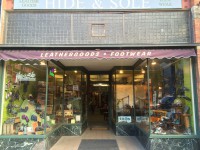 What’s Selling at Hide and Sole in Missoula

On Nov. 5, Villa—a specialty retailer of urban apparel and footwear with 24 stores in Pennsylvania—hosted a service day at West Philadelphia High School, with musician and humanitarian Wyclef Jean, The Timberland Co. and NBA Cares getting in on the action. “Our mission is to educate and inspire youth in inner cities, especially Philadelphia, to become community leaders,” Villa CEO Jason Lutz said, explaining the reasoning behind the retailer’s Big Serve initiative. Last week’s effort marked Villa’s largest service event to date.

A ‘First’ for Keen

While sightseeing at the Grand Canyon earlier this summer was surely a grand experience for President Barack Obama and his family, it was equally grand for Keen Footwear. The Portland, OR-based company’s Venice H2 sport sandals were the rugged, warm-weather footwear of choice for Obama’s daughters, Malia and Sasha. And at a suggested retail price of $49.95, the sandals’ on-land and in-water versatility surely delivered a bang for the buck.

Just in time for summer adventures, Amazon.com is amplifying its outdoor selection and its reputation as a one-stop shop with an Outdoor Recreation store. The new portal, a department accessible from its main Web site, is the Seattle-based e-tailer’s response to a popularity surge in its camping and hiking categories. In addition to offering an expanded selection of apparel, footwear and gear, Mark McDonald, senior marketing manager for Sport and Outdoors at Amazon.com, expects the site to become a forum for the outdoor community.

Keen got an early start on summertime adventures. As part of the brand’s HybridLife Days in-store initiative, shoppers at participating retail locations can enter the HybridLife Adventure Trip Sweepstakes by filling out a card that asks “Where will your Keen shoes take you?” The Grand Prize winner receives a trip for two on a Bryce and Zion National Park Adventure—a 6-day excursion packed with mountain biking, rock climbing, canyoneering and hiking.

Merrell Socks It to Us

When suiting up for a trail run or a hike, Merrell loyalists will soon be able to don the label’s socks before stepping into their Jungle Mocs, as the Rockford, MI-based Wolverine World Wide division bows performance socks for Spring ’10.

Organizers for the Outdoor Retailer show announced that attendee registration numbers for the 2009 Summer Market, held at the Salt Palace Convention Center in Salt Lake City, UT, July 21-24, are meeting benchmarks from this time last year. If registration numbers continue to grow at the current rate, Outdoor Retailer will be on track to meet, and possibly exceed, the number of 2008 attendees.