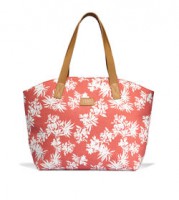 The brand rolls out a limited-edition collection inspired by Hawaii. Socially conscious rapper and hip hop veteran Talib Kweli stepped out Tuesday at the Core: Club in New York for Ugg Australia’s Fall 2014 campaign kick off. Entitled “This Is Ugg,” the company focuses on how some of the smallest moments in our lives often end up becoming the most important in retrospect, featuring personal anecdotes from various brand ambassadors including New England Patriots QB Tom Brady and model/illustrator Langley Fox.

Ugg Australia has launched Ugg by You, an online customization tool that puts the power of design at customers’ fingertips, transforming a visit to the brand’s website from a shopping trip to a creative experience. The tool allows consumers to riff on two classic styles, the Ugg Classic Short sheepskin boot and the Fluff flip-flop, by mixing and matching more than 11,000 color, outsole and trim combinations. Prices for the boot and sandal start at $220 and $110 respectively and increase per custom touch.

Ugg for Men launches its Fall ’13 “For Gamechangers” campaign.

Ugg for Men hosted a gathering of influencers last night at New York City hotspot The Lion to celebrate the launch of its Fall 2013 “For Gamechangers” campaign, featuring NFL Quarterback Tom Brady, and to officially kick off the new #UggMenofCharacter Tumblr contest, which allows people worldwide to recognize and celebrate a friend for their accomplishments.

A Toast to Brand Strength

In case you missed the ads or didn’t get the chance to swing by its historic St. James’s Gate Brewery in Dublin this year, Guinness celebrated its 250th anniversary in 2009. While such an incredible milestone is most worthy of celebration (250 years!), what is particularly remarkable from a branding perspective is that its stewards have remained steadfast to the storied stout’s ingredients, kept its brand image equally pure and never turned their back on its rich Irish heritage. To put it bluntly, Guinness has never “put a lime” in its beer.