The iconic sandal brand gets a dose of style in this capsule collection. 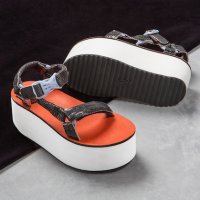 Teva Gets the Nasty Gal Treatment

When it comes to summer music festivals, what you wear is just as important as the music. On the heels of releasing its line-up for 2014, Bonnaroo Music & Arts Festival announced that Teva would be the official sandal sponsor. “The simplicity, utility and freedom of sports sandals make them the ideal footwear for summer festivals,” says Lucas Martinez, Teva’s marketing manager.

Bucking the minimalist trend, the TevaSphere Speed shoe accounts for the fact that most runners land on their heels. Almost rocker-like in appearance, a spherical heel piece and midfoot outrigger pods manipulate stride to force a smooth transition from heel to forefoot. After spending the past six months or so working out in a pair of funky neon minimalist runners, I decided to try out a pair of TevaSpheres last night.