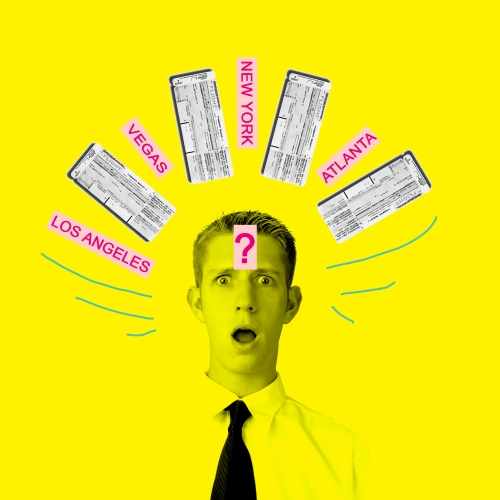 Timing, traffic and turmoil spark debate over which trade show will emerge as the national leader.

Where will you be, come February 2? With both WSA and FFANY now scheduled to take place Feb. 2-4, 2010 (and overlapping again Aug. 3-5), both fashion footwear vendors and buyers will have to make the choice between Las Vegas and New York or split their resources among the two. The general sentiment? This isn’t a good thing—especially if you are of the belief that a national trade show is the ideal forum for the industry to exchange ideas, make deals, and discover new trends, brands and partners in an atmosphere that generates excitement for the upcoming season.

“I have no idea why ENK [International, WSA’s parent company] and FFANY have to compete,” says Marty Rose, agent/distributor for All Black, who notes his small company won’t be able to attend both. “There should be a way to work it out so shows are spread across the year in a balanced way so buyers don’t have to decide.” According to Dave Murphy, Dansko’s executive vice president of sales and marketing in West Grove, PA, “Any time the shows conflict, it means additional investment in time and money for the brands. Anything that reduces the amount of business opportunities you have is bound to cause damage.” Birki’s vice president of sales and marketing Robert Mangione agrees. “If we pick one over the other, there’s a chance we may miss,” he says.

On top of WSA and FFANY, Outdoor Retailer recently announced its 2010 summer market will be held in Salt Lake City Aug. 3-6, giving outdoor lifestyle brands yet another option and further complicating the show calendar. At the root of it all lies two main questions: What dates, location and venue offer the best opportunity for footwear retailers and manufacturers to conduct seasonal trade? And can this even be done on a national level nowadays?

Positioned as the show serving all footwear categories and retailers, WSA has been that broad industry platform for the past two decades (give or take), but some large exhibitors pulled out of recent editions due to timing concerns and the rising costs tied to exhibiting and staying in Las Vegas. However, ENK (which took over the show in 2008) is determined to get the situation back on track. Changing the dates was step one, ENK president Tom Nastos reports. “We came to the conclusion that these were the optimum dates for a national show,” he asserts. “Did it satisfy everybody? No, but it’s pretty close.”

Attendees also wanted WSA to find a venue big enough to house the entire show under one roof. It managed to do so for next year, securing the Mandalay Bay Convention Center for WSA’s February edition and the Sands for August and future editions. Now WSA management is working to maximize efficiency so all vendors will have the opportunity to connect with key retailers. Bringing aboard fledgling companies and fresh talent is also a priority to woo buyers seeking newness in design and innovations, Nastos reports. “I’m very optimistic that in 2010 we’re finally starting to go in the right direction,” he adds.

WSA’s past management had lost the industry’s love, says Joel Sigal, owner of Littles Shoes in Pittsburgh, PA. “They didn’t make [the show] retail-friendly,” he says. “In fact, they became almost adversarial to us retailers.” So if ENK can reassess the goals of WSA and then deliver, perhaps it will regain the appeal many past attendees agree has waned of late. Still, some aren’t sure the traditional giant show approach, with its over-the-top booths, celeb appearances, etc., provides a solid return on investment, as vendors’ show budgets have withered due to the economy. Retailers, too, have seen their travel dollars shrink, and thus are increasingly turning to more geographically accessible shows.

Others question whether a national event is the most advantageous platform in light of today’s buying cycle. Nowadays, getting a buyer to commit to an order six months in advance is a tough sell, since booking product closer to season—sometimes plucking product straight out of vendors’ stockpiles—has been a better way for retailers to stay on top of consumer trends. “Shows are supposed to be visionary going forward, but today people are buying ‘of the moment,’” Birki’s Mangione says. He also notes that, with many manufacturers making pre-visits to their biggest customers, the opportunity to present a “big reveal” on the national scene becomes a rather moot point.

All of this has many execs giving FFANY a closer look. Though its primary focus on the women’s fashion market won’t draw the same breadth as a show geared to the industry en masse, and its multi-venue, hotel room-driven format goes against the traditional approach, FFANY president Joe Moore is not concerned. He says FFANY’s board of directors fully supported the decision to stick with the pre-set dates despite WSA’s shift, and that retailers see the value in a New York show from a fashion standpoint. “We’ve zeroed in on the major stores—the Nordstroms, the Macy’s of the world—and they are definitely supporting us, as are the fashion independents,” he notes. “For [other retailers] across the country that carry a bit of everything, it’s more of a decision. I think it’ll be a learning process for some who choose to go to Vegas and see if they’re adequately covered or [realize] they’ll have to come to New York next time.” Moore does not believe the date overlap is in the industry’s best interest, and believes WSA will be weaker in 2010 as a result. “Is that necessarily good? No,” he says. “But there is an advantage for FFANY; they’ve made FFANY stronger.”

Could FFANY ever establish New York as the national platform? Moore says it might be possible via future partnerships, but the nonprofit hasn’t revealed any alliances yet. There are signs that New York has growth potential, however, and that the industry has perhaps grown weary of traveling to Vegas. Last month, Compass—a trade show for directional fashion brands that had been held in Vegas during WSA since its inception in 2008—announced it will move to New York in February. “We’re just listening to what the market is saying,” says Compass co-founder Edina Sultanik. “I think New York is going to win out. There’s a bigger concentration of brands there—at least for our market—than in Vegas right now.” She notes Compass attendees will likely save their trip to the Strip for Magic, which will take place two weeks later.

The conflicting FFANY and WSA runs might be a boon for Magic, which has announced plans for a footwear-dedicated offshoot founded in partnership with Footwear News (sister publication to WWD, which already hosts a WWDMagic women’s wear section at the show). Magic had openly declared intentions of increasing its shoe category in the past, and brought aboard ex-WSA exec Leslie Gallin as vice president of footwear for Advanstar’s Fashion Group (Magic’s parent) to oversee the growth. Gallin believes Magic’s dates (Feb. 16-18) are perfect for companies that want to launch their product at FFANY, then roll it out to the masses a few weeks later. “It becomes more advantageous as a writing event,” she explains. Furthermore, Gallin and Chris DeMoulin, president of Magic International, note Magic’s head-to-toe fashion context gives buyers a unique perspective on what will be hot each season. For those concerned that shoes might be treated as a stepchild in the house of ready-to-wear, DeMoulin asserts, “We’ve always positioned Magic as a place where all trends in all categories and all influencers and brands can come together to learn. We’ve always had accessories that complement the core assortment,” he adds. “[And] we’ve done the research; 72 percent of buyers said, ‘If Magic had more footwear, I’d buy more footwear.’”

Of course, there’s a chance all of these shows will splinter off into regional events. In fact, the current economy may be propelling everyone toward this dispersal. “We’re seeing regional shows are actually more productive for our company in terms of being able to work with people and write orders,” Dansko’s Murphy remarks. But when a turnaround’s effects begin to be felt and the desire for a singular industry platform becomes stronger, it’s possible that a well-established regional show could blossom into a national player.

This opens the door for The Atlanta Shoe Market (TASM), which the Southeastern Shoe Travelers Association and executive director Laura Conwell-O’Brien have been cultivating as the next national show (scheduled for Feb. 19-21). TASM’s pitch as a low-cost, easy-to-shop show housed in one venue is enticing, especially as the show reports record growth in traffic. “As each show approaches, we get more and more interest and attendance from the major and independent buyers as well as [international] buyers,” Conwell-O’Brien notes. “We’ve watched what the industry is looking for and we feel we have the right ingredients for what the industry desires at this time.”

Meanwhile, yet another contender is vying for top billing among industry shows: The United Shoe Show (USS), a nonprofit trade event set to launch Aug. 6-9, 2010, in Los Angeles. “Because of all the craziness going on [with the shows], I think it’s probably time to try something new,” says founder Gary Hauss, head of the J Stephens retail chain, who notes USS will be the only show held for the industry, by the industry. “WSA has put a tremendous amount of logistical pressure on vendors at a time when they can’t really afford additional staff and expense,” adds USS director Frank Catapono, a 40-year industry veteran, who promises a single venue—the Los Angeles Convention Center—and booth prices 30- to 35-percent less than WSA’s.

Catapano claims several major manufacturers are interested, (though he declined to name names), and its dates make it viable as a West Coast option, if not a full-fledged national title winner from the onset. Management has tapped ConvExx, an award-winning trade show producer, to support the event and ensure it will be economically feasible, efficient and a profitable event for both wholesalers and retailers.

That’s music to the ears of many execs. For some, like Dave Aznavorian, vice president of marketing for Earth, next year’s muddled show calendar is sparking reassessment of which events have the most profit-making potential. “Ultimately, that should be a good thing for everyone,” he says.

Whether the best investment lies in Vegas, New York, Atlanta, L.A. or Des Moines, Aznavorian believes trade shows remain a vital tool for the industry. Sigal of Littles Shoes agrees but still has one request: “The big companies need to get together and figure out what makes the most sense. I’m not saying [which show is] right or wrong. But for the health of our industry, we need a national show.”