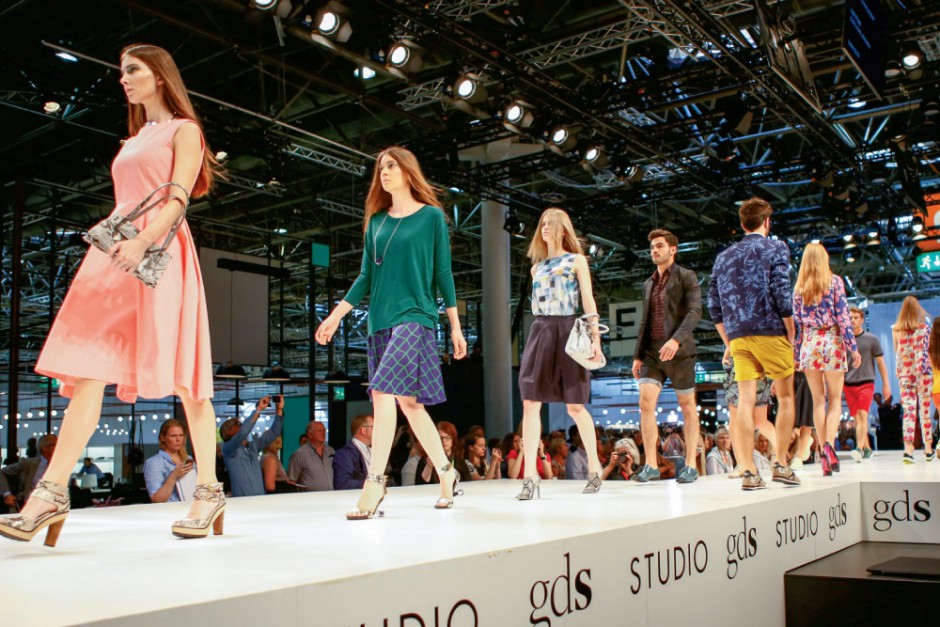 GDS Gets a Makeover

When Kirstin Deutelmoser, director of Germany’s international shoe fair GDS, decided it was time to reboot the biannual event’s format, she didn’t have to look too far for inspiration. The show’s host, Düsseldorf, provided the perfect blueprint. Like most thriving metropolises, the city’s shopping districts are clearly segmented into three main zones: a hip area filled with edgy stores and indie upstarts where the future of fashion is incubated; a high-end hub where the well-shod shop big name brands; and main street, home to the ever-ringing registers of fast fashion. With this in mind, along with earlier seasonal dates (The spring edition had traditionally been scheduled at the tail end of the buying season in mid-September.), organizers unveiled a new concept featuring more than 900 brands on display and visitors from more than 100 countries at the most recent show, held July 30 to Aug. 1.

Billed as a kick-off event for shoes and accessories, Deutelmoser says the idea behind the revised format is to whet people’s appetites for new product. “A leading trade show should bring together the whole sector and create enthusiasm for the next season by giving the right information to buyers so they can be prepared,” she says, noting that the old setup was stale because buyers had already seen the collections at other shows. “We wanted to create an environment where exhibitors had the ability to really showcase something new,” she adds. Split into three groupings, exhibitors were spread out across Pop-Up (up-and-comers), High Street (tried-and-true collections presented in storefront-inspired booths) and Studio (boutique brands). Several companies, including Caprice, Porsche Design, Maypol and Bugatti, held product presentations at their booths, while Birkenstock, Highline United, Clarks and Camel Active showcased their spring collections on the catwalk.
In addition, the likes of Lacoste, Gant and Marc O’Polo returned to GDS after long absences. “For them, it was always a matter of timing. They were totally clear about that. With the late date that we had before, they said they would never come back because they needed to show earlier,” Deutelmoser shares, adding that these companies also inspired the store-like booths as they didn’t want to preview their collections in closed stands. “We strongly believe that it’s important for the shoe sector to do more storytelling and really do something to inspire the consumer, and to inspire the consumer we need to first inspire the retailers,” she offers.

Also on-site to inspire was Tag It!, a new show for private label shoes and accessories with 370 companies spanning brand names to high-volume bargains. And more than 100 fashion bloggers were invited to attend the final day of the show, getting the chance to check out the Spring ’15 trends at Shoedition, a fashion blogger “cafe” operated in cooperation with German online magazine, Styleranking, and watch a runway show styled by fellow social media stars featuring footwear from Inuovo, Minnetonka, Peter Kaiser, Jeffrey Campbell and Högl. “Bloggers are getting more and more important because they are a direct connection to the consumer,” Deutelmoser says.

Consumers got a chance to enjoy the show, too, thanks to the first-ever Out of the Box festival. In an effort to connect Düsseldorf to GDS, lectures, shopping promotions and workshops as well as events in galleries and bars celebrated shoes all over town. Oversize pumps were dotted around the city as part of the “Supersize Me” exhibition by Spanish artists, a walk-in shoe box on Schadowplatz showcased surreal designs by Ohne Titel and recycling bins encouraged consumers to donate their old shoes to charity.

So how did the industry take to the revamped show? While a visitor survey revealed that 50 percent of attendees came to GDS with the intention of placing orders, some exhibitors were disappointed with the overall traffic. Kevin Sefton, founder of British brand Govan Originals, would have liked to see more international buyers. “They just didn’t materialize,” he says, “But those visitors who saw our shoes really liked them and saw something fresh and exciting.” Rachael Laine, European distributor for Salt-Water Sandals, told a similar tale. “It was really well organized and we loved the layout but it was quiet,” she says. It’s an issue the GDS team knew it might run into. “We were aware that the early dates would come with special challenges, which is why we expected visitor attendance to drop slightly,” admits Werner Matthias Dornscheidt, president and CEO of Messe Düsseldorf, but he’s confident that attendance at future shows will increase.

Along those lines, attendees of the upcoming Fall ’15 edition of GDS (slated for Feb. 4-6, 2015) can expect to see improvements and tweaks to the new format. “There are a lot of little details to be optimized, that’s for sure. And we are really looking for special exhibitors that we’re missing,” says Deutelmoser, adding, “One thing that has become clear after this event: Due to the earlier dates of GDS, many retailers will decide at the trade show which suppliers they will take into consideration for future orders, so it will be key for exhibitors to present themselves perfectly.” All signs point to tapered toes next season as designers embrace leg-lengthening silhouettes. Pointed pumps in sherbet shades add a dash of panache to ladylike ensembles, while slingbacks and pop art prints shake up the demure shape and sultry cutouts lend a hint of peek-a-boo chic. This ain’t no disco, but mirror-like metallics and iridescent finishes worthy of a glitzy night at Studio 54 will take center stage next season. Brands like Clarks and Ash put the pedal to the metal with Space Age-inspired slingbacks and sandals, while Ara’s silver toecaps and heels on hot pink flats prompt some serious reflection. Elsewhere, three-dimensional holograms add a colorful kick to sneakers and slides, and matte details lend a subdued tone to pointy pumps for a daytime friendly approach to the futuristic trend. Designers have tacked thick, white rubber soles to the bottom of the season’s most ubiquitous styles, be they slip-on sneakers or footbed sandals. The statement sole adds a pristine underbelly to a bevy of uppers, from juicy patents at Birkenstock and shiny silvers at Clarks to marbled leathers at Ash and chalky suedes at Inuovo. Long favored by grannies the world over, the chunky heel has stepped into fashion for next spring, albeit with a few sartorial updates like a thick platform, chic ankle straps and some serious height. The midi style can be found stabilizing everything from summer boots to caged sandals to ladylike Mary Janes done up in a mélange of materials. Metallic rands toughen up sexy snakeskin ankle boots, and lug soles add some downtown flair to ’70s-esque silhouettes. Once the silo of choice for diehard skaters and surfers, the slip-on continues its crossover renaissance for spring. Recent runway shows have seen the likes of Céline and Dior channel their creative energies into the humble sneaker and mainstream brands have fervently followed their lead. The latest take on slip-on plimsolls spans snake and animal prints to bold blossoms and soft suedes. Next year is the Year of the Sheep according to the Chinese zodiac, but Spring ’15 is undoubtedly the season of the snake as a plethora of python—both real and faux— slithers its way onto silhouettes of all sorts. The untamed pattern turns up in vivid hues on men’s desert boots, oxfords and sneakers, and women’s espadrilles get a glamorous makeover with shimmering thread winding its way through blush toned uppers. Retro joggers run wild for men and women alike next season. But while the classic kicks might look like something straight out of Bruce Jenner’s closet circa the ’70s, these trainers will never see a racetrack. Available in a kaleidoscope of color-blocking combos and prints, these updated iterations go for gold with holographic details, mesh accents, double soles and watercolor floral uppers.

Though ankle straps are everywhere for spring, crisscross styles offer a more flattering alternative, with looks ranging from skinny leather ones on low-heeled sandals to a wider version on slides and chunky platform sandals.

Designers take a stab at slingbacks next season, presenting the perfect compromise between a pointed pump and a sandal. The ladylike silhouette gets a modern makeover with geometric-printed uppers paired with contrasting heels, while patent wedges, colorful kitten heels and comfy flats convey a contemporary quality.

Ever the outsider, flatforms make another bid for fame. Part wedge and part flat, these elevated steppers make a more fashion-forward statement than footbed sandals or mules. This time around the thick sole graces the underside of men’s oxfords and women’s double-strap sandals as well as sneakers for both genders.

Shoved aside by smoking slippers and loafers in recent seasons, the classic ballerina flat looks to make a comeback for spring. The French favorite has seeped back into the fashion zeitgeist via Saint Laurent, Isabel Marant and A.P.C., and footwear brands have taken note. Many collections included upgraded takes on the basic ballerina in a wealth of materials and prints.

Since making its high-fashion debut in the Spring ’13 collections of Céline and Giambattista Valli, the humble footbed sandal has been reborn as a fashion do for next spring. Leaving its hippy backpacker roots in the rearview mirror, the slip-on style now comes on a variety of bottoms spanning wedges to platforms, with double-strap and thong uppers made over in denim, patent and suede.

Every men’s dress brand worth its suede is playing in the paint box next season. Emboldened by the overwhelming popularity of Crayola colored outsoles, designers are stepping things up a notch and injecting the uppers of wingtips and oxfords with shots of cobalt blue, kelly green and raspberry red.