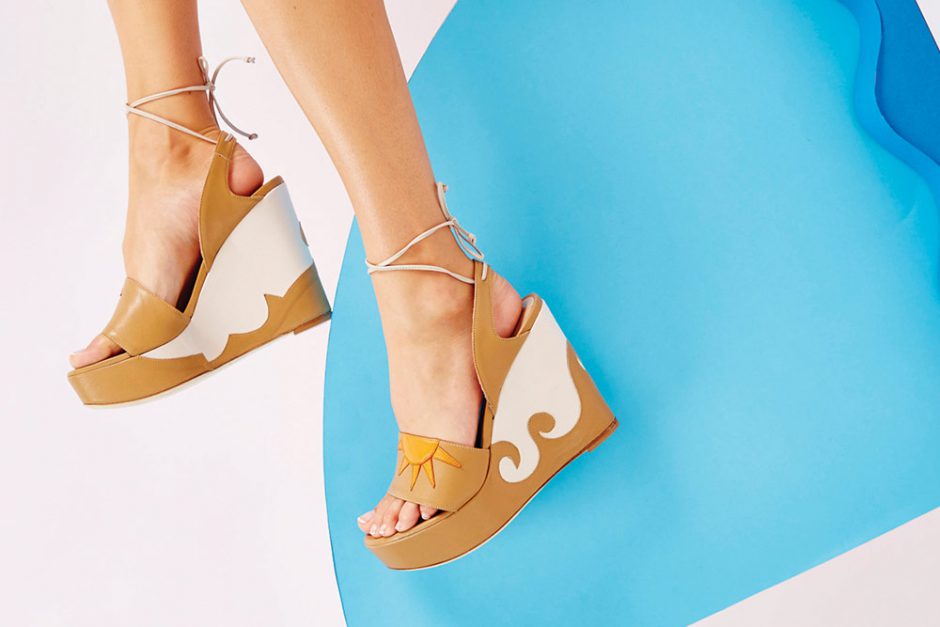 The Age of Disruption

Amid turbulent and unpredictable times, designers pull inspiration from near and far for Spring ’17.

When asked what the next big movement in fashion will be, designers and retail experts seemed to agree on one thing: disruption. A shaky economy, a wildly unpredictable election cycle, terrorist attacks and tectonic shifts in retail are just a few of the factors wreaking havoc on day-to-day life. The new black is disruption. Designers have been left with the daunting challenge of trying to create collections that cut through the chaos and attract the attention—and discretionary dollars—of consumers. Retailers are faced with equally difficult challenges, hedging their bets and buying right to find a way to lure consumers out of their safe spaces and spend a day shopping. Sure, people aren’t about to go barefoot anytime soon, but you must forgive them if they are not as tuned into whether fringe is trending when the lunatic fringe may capture the White House.

“There’s such a mix of things happening on all levels, high and low. The idea of fashion week and when people are shopping is changing,” says apparel, handbag and shoe designer Christian Siriano. He adds that for Spring/Summer ’17, his collection errs toward the transitional because, “It’s a new world out there.”

Jessica Massey, associate buyer for boutique chain and e-commerce site Otte, agrees that shedding old conventions is the only way to survive amid these disruptive times. “Customers are looking for ‘buy-now-wear-now’ pieces more than ever,” she says. “For 2017, brands are really listening to the consumer’s request and offering more pieces that can be worn at the time when they’re delivered, rather than buying for the following season months in advance.”

One of the results of this shopping shift is that consumers have more power to influence trends than ever before, especially with an individuality-obsessed generation leading the charge. “Millennials are like, ‘I don’t give a —-, I’m going to wear my Docs with this dress,” quips Meghan Cleary, shoe expert and founder of meghansays.com.

Even up against these challenges, however, designers believe a few key themes will connect with consumers next spring. And these trends have one reassuring trait in common: a belief that brighter days lie ahead. “Fashion is a reflection of society. Now we are living in a very difficult moment, and all we can do is be optimistic and positive,” says Marianna Rosati, designer for Drome. “Fashion should do so and communicate so!”

Color inspiration for next season stems from steamy climates influenced, in part, by the recent expansion of American travel to Cuba. “There’s a lot more of that sort of sunny climate look, with textural materials and colorful detailing,” notes Cleary. She predicts Africa will be another hotspot, citing the rising influence of African and African-American designers including Theresa Ebagua (designer for label Chelsea Paris) and Eleanor Anukam.

Dolapo Otunia, founder and designer of women’s dress brand Oysby, dubs this theme, Modern Ethnicity. “Prints were consistently seen on the [European] runways with designers like Chanel and Christopher Kane taking a more South American carnival-type approach on print designs and colors,” she explains, adding that for her Spring ’17 collection, this consists of non-typical animal prints, woven topstitches, fringes and asymmetrical whipstitches. No doubt the recent Rio Olympics had a strong influence here as well.

Jaime Barr, senior editor footwear for the forecasting service WGSN, is zoning in on one Caribbean local in particular: Cuba. She forecasts an array of tropical influences and raw materials like jute, canvas and cork. “It’s a cool, casual blend of culture and glamour,” she notes. Nicolas Huneault, vice president of design at Titan Industries, is in stride with that inspiration for the company’s brand portfolio, which includes Badgley Mischka, Splendid, Daya by Zendaya and Charles Jourdan. “We are very much into a more relaxed, laid-back type of glamour,” he says. “Everything has to be effortless.” For Spring ’17, Huneault was grabbed by botanical prints and ’60s Hollywood glamour, creating block heels, peep toes and slingbacks in such bold colors as flamingo pink, dark jade, Mayan gold and poppy red.

Men’s footwear and apparel designer David Hart is also drinking the retro-glamour Kool-Aid. “The collection is inspired by the surf culture of Southern California during the ’60s and ’70s,” he says, adding, “I was inspired by the photographs of LeRoy Grannis and the music of Dick Dale and Link Wray.” Tropical and surf prints highlight his menswear collection, which includes a palm-print sport coat. (A bold statement, indeed.)

Overall, designers are curating a world traveler look—and the sunnier, the better. “The idea is that our girl is traveled in these different resort locations,” Siriano explains. “We’re calling it ‘Holiday in Capri.’” Visiting different Italian seaports, the designer was inspired by locally made tapestries. Similarly, Elona Appleby, footwear designer for James Carletons, picked leathers based on her travels. “We went to Turkey and took photos of the spices,” she says. “You can take inspiration from anywhere,” agrees Cleary. “There are no borders anymore.”

In the science of fashion, every trend has an opposite extreme. On the other end of loud tropics is a movement for demure minimalism. Siriano describes his less-is-more take like a day on the beach: “You see beautiful neutrals, skin and naturalness, and then you see really saturated tones on people’s bathing suits and umbrellas, or on candy and ice cream,” he explains. “This collection has a lot of beautiful, romantic neutrals and we play off of that with some really saturated colors.”

Otunia notes a similar minimalist theme taking hold for next season. “We love how Alicia Keys’ style has evolved and, particularly, how her #nomakeup movement proves now more than ever that less is more, and it’s okay to keep things natural, baring it all,” the Oysby designer says, adding, “She has been a significant inspiration for this collection, hence the use of seemingly basic stitch techniques that produce interesting designs once executed.”

For Drome’s inaugural footwear collection, Rosati kept the color palette “natural and clean,” in line with her clothing line, putting emphasis on silhouettes instead. Blush is a key color, garnering a reputation as an alternative neutral. Typically known for its bright colors and busy patterns, Bernie Mev is taking the softer, tamer route for next spring as well. “Fashion lately has been so complex and fringy and mixy-matchy,” explains founder and designer Rachel Carmi as to why she’s “keeping it a bit cleaner” next season. “A lot of women wake up in the morning and don’t know what to do anymore,” she adds. The line leans heavily on a palette of blush, soft gray and pure white.

Massey also cites blush and navy as key colors in no-nonsense silhouettes for Otte next spring. As for what qualifies as a no-nonsense silhouette? “We noticed that the slide/mule trend is stronger than ever,” she says. “Just about every brand found a way to incorporate them into their selection this season.” Massey says part of the the mule’s appeal is its ability to easily pair with any outfit.

With the fall of the mall and the rise of downtown shopping centers comes a focus on a curated, hand-made aesthetic. One hip and inspirational borough in particular is Brooklyn, burgeoning trends that span bespoke to Boho. It is ground zero for trendy Millennials and their social media–driven influence. In fact, the borough is serving as a blueprint for new urban outposts as nearby as Queens and as far away as Omaha. Brooklyn, it seems, is a way of life.

“This is one of my favorites,” notes WGSN’s Barr of this macro theme. “It’s all about the emerging creative neighborhoods outside of urban cities.” According to Barr, this influence appears in the form of a “dusty palette of bright pastels with a gritty edge and feminine detailing.” She cautions that though this theme has a folky/vintage feel, it’s not the needlepoint or floral wallpaper one might expect. Rather, it has the grit and edge of these urban outskirts balanced by feminine colors. The look, she says, is that of someone’s grandmother having stitched the embroidery onto a beautiful leather sandal.

“We’re putting the idea that things look natural and handmade over the futuristic,” confirms Siriano, who notes embroidery, buttons and overlay fabrication as key details for Spring ’17. “The shoes have a vintage feel, but we’re trying to modernize them with fabrication,” he adds.

Naomi Reid, designer for Latigo, agrees that this inspiration is key for her collection. “It started with Brooklyn being in and Manhattan being out,” she notes, adding, “Now Brooklyn isn’t affordable, so people are going to cities like Baltimore and Salt Lake City.” Reid was inspired by a trip she took with her husband to rural California, particularly to a town called Nevada City. She stumbled upon a corporative of craftspeople called Gold Dust Collective. “This was the most beautifully put-together store from artisans all over that area,” she says. “This a tiny town, but all these people had moved there and created this amazing artistic community.”

Reid is incorporating details that evoke a handmade feel—like using stacked wood heels instead of wrapped heels—into Latigo’s spring line. She continues to be inspired by these new creative outposts: “As a shopper and an explorer, going into beautifully curated stores run by individuals is so much more inspirational than walking into Aldo,” she says.

You may have seen this one coming, but by all expert accounts, athleisure isn’t going anywhere. It’s comfortable, versatile and sexy: What’s not to like?

“Nothing’s replaced it yet. Athletic [fashion looks are] still a key driver,” confirms Marshal Cohen, chief industry analyst at NPD Group. For Spring ’17, sport borrows inspiration from the late ’80s and early ’90s. According to WGSN’s Barr, this manifests in the form of gender-neutral styling and bright, primary colors. She adds that Salt-N-Peppa and old-school Jennifer Lopez serve as muses for this trend. “Think vintage pumps and hi-top sneakers, rubber cleat soles on sandals with white-rubber bottoms,” Barr says.

“Pre-Spring 2017 had a very strong ’90s vibe with all of the simplistic carefree styles—slip dresses, bomber jackets and slides,” agrees Otte’s Massey. “There was definitely a noticeable ode to the ’80s as well, with all the ruffles and voluminous silhouettes.” She is particularly akin to the effect these trends had on sneakers incorporating ruffles, smocking and denim. Similarly, Cleary sees ’90s whimsy “across the board—from running shoes to luxury designer styles.” Cleary believes that the trend of pairing sneakers with dresses for summer will be even stronger next year. Why? Because sneaker designers are delivering options. “It’s bolstered by these choices in the market,” she says. “If we didn’t have super-cute sneakers, people wouldn’t embrace the look as much.”

The other arm to this influence, according to Barr, is the rise of East Asia’s global influence. “A ton of our clients that are based in the U.S. are looking to expand into that region,” she says. “There’s massive amounts of money to be spent there.” That power, she says, is helping drive flatforms, sport sandals and ’90s minimalistic styles.

It’s a cocktail of factors that gives athleisure and sneakers staying power. “This is a consumer-born trend,” explains Cohen. “It has more endurance, because it wasn’t the market [dictating to consumers]. It’s the consumer wanting to wear the same shoes to the gym and from the gym.’”