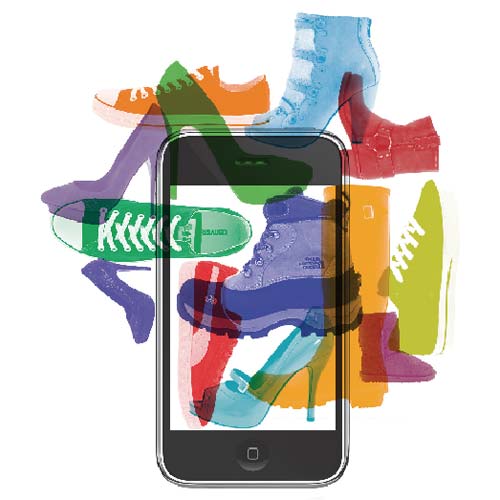 Smart shopping used to mean clipping coupons from the Sunday paper, but today’s budget-conscious consumer finds discounts at the touch of a button. Thanks to Smartphone technology and a slew of new mobile applications, shoppers can scout stores using GPS navigation, scan barcodes to find the lowest price, create and share wish lists with friends and family and read product reviews and compare similar items. It’s the age of the über-informed buyer.

And the trend is gaining traction at a dizzying pace, leaving manufacturers and retailers scrambling to address the needs—and capture the dollars—of the mobile shopper. In fact, nearly half of all Smartphone users say they have already, or soon will, use their phones to shop, according to ABI Research, a technology research firm based in New York. During last November’s busy shopping season, Smartphone usage jumped by 249 percent over 2009, with 64 percent of Smartphone owners using a price comparison app on Black Friday, according to Mobclix, a mobile advertising technology firm. “With Smartphone sales increasing in popularity, and apps that make your life easier in a fast-paced world, mobile commerce is here to stay,” confirms John Kalinich, vice president of consumer direct for Ugg Australia, which created shopping applications for Apple and Android devices this year. Downloads of the applications, as well as sales of Ugg products directly from the platforms, have steadily increased every month, Kalinich reports.

Joining Ugg, many manufacturers, department stores and online retailers are jumping on the mobile bandwagon, creating mobile applications to keep their customers hooked. Neiman Marcus, Zappos and Payless Shoe Source all created shopping apps this year, while Finish Line and JCPenney ramped up their mobile efforts by allowing customers to make purchases directly from their apps. “It’s kind of a wild west atmosphere,” says Dave Swartz, president of MEDL Mobile, a mobile marketing technology company based in Irvine, CA, describing the increasingly crowded and complicated mobile landscape. Swartz’s firm developed the Mall Maps Deluxe app, a navigation tool that allows users to find nearby shops and see the layout of local malls. Yet despite the ever-expanding digital landscape, Swartz notes that “there’s still a lot of room for developing custom application for retailers.”

But just because the opportunity exists doesn’t necessarily mean it’s a solution for every store, says Stephen Cobb, who calls himself a “marketing evangelist” for his Philadelphia-based marketing technology company, Monetate, whose clients include QVC, Dick’s Sporting Goods and The Sports Authority. “There’s not a one-size-fits all answer to mobile. It’s really going to depend on what your existing channels are—if you’re brick and mortar, catalog, have a few locations around the country or a store in every city.”

So what should retailers consider when deciding on developing an app? “I think the calculation for a retailer varies enormously according to size,” Cobb says. “Not only is it a question of cost, you also have the issue of managing two different platforms. If you have an after-Christmas sale, you’re going to have to put that on your regular website, and then you have to put that in the mobile app as well.” That kind of maintenance might be more than smaller retailers can handle. Not to mention, many smart phone users may have “app fatigue,” Cobb notes. “I’ve got 96 apps on my iPhone, including Amazon and Target. Am I going to put a specialty shoe retailer on there, too?”

That doesn’t mean smaller retailers and manufacturers should stay out of the mobile shopping arena completely, Cobb asserts. It may be better for some shops and manufacturers to concentrate on making their website more “mobile-friendly,” since a majority of Smartphone shopping still happens on mobile websites, rather than within an application. That’s why Wolverine World Wide decided to launch mobile websites for many of its brands, including Merrell, Hush Puppies, Cushe, Chaco and Sebago, says Jodi Watson, vice president of global e-commerce and consumer insights for Merrell. While Merrell has discussed launching an app, the brand is waiting for more feedback from its customers before delving into the technology. “I’ve seen a lot of people running to be first and create an app before they’ve seen what the problem is and what the role is,” Watson notes, adding that the focus on Merrell’s mobile shopping site has paid off. “So far, we’ve been really pleased with the results. We’ve seen about 1 percent of our sales happen on the mobile site.”

Aside from launching mobile websites, an increasing number of retailers are finding creative ways to boost business by working with existing mobile applications. JC Penney recently joined a growing number of retailers offering location-based coupons, by giving Smartphone users discounts up to $50 for “checking-in” with GPS-enabled apps like Foursquare and Facebook. Taking advantage of these apps can also be beneficial for smaller stores, by helping connect shops with nearby customers—especially since the apps are free. “The chains always have the budget to do certain things, like advertising. The independents may offer better product, but they don’t have the budget to put it out there,” notes Brandon Williamson, who created his SoleSearch application to help give a boost to independent sneaker boutiques. So far, his application has been downloaded 30,000 times on Apple devices and launched for Android devices last month. “Something like SoleSearch allows for the independent retailer to immediately offer the product [to the consumer],” Williamson notes, since the application links to each retailer’s website.

“The use of a mobile affiliate can be very good,” agrees Cobb, “with the caveat that you’ve got to make sure you handle that traffic appropriately. If you are on Yelp with a 20-percent-off offer, the click-through has got to reiterate that offer when people land [on your website].” In fact, consistency across online platforms—from applications to websites to email—is key to ensuring shoppers ultimately click the “buy” button, Cobb says. “What we’ve found is that if you’re offering something to someone, they’re always worried that you’re going to bait and switch.”

That’s why Zappos decided to produce their mobile app in-house, says product manager and app designer Jamie Newberry. “The reality is that we had outsourced to two different vendors and it wasn’t really working out,” she explains. Newberry knew that the company wanted a very basic app that provided the same design and ease of shopping as the brand’s website. “We wanted people to be able to get in, browse around, find what they’re looking for, buy it and get out. We didn’t want to clutter it with too many gimmicks or bells and whistles.” So far, the streamlined strategy seems to have worked: The 4-star rated app is averaging about 2,000 downloads a day.

As mobile technology takes off, the online and in-store shopping arenas are increasingly merging. Sites like TheFind, which launched a mobile app in November, allow users to compare prices on products from both nearby stores and online retailers (a type of technology that both Google and Ebay have recently acquired and are incorporating into their mobile platforms). “The future of shopping lies in a further blurring of the lines between online and offline,” notes Usher Lieberman, director of corporate communications for TheFind. So will the move to mobile make in-store shopping obsolete? Not by a long shot, experts agree. Most industry insiders see mobile applications as a complement rather than a replacement to the in-store experience. “We know that many people come to our website to research, and then they buy offline at their favorite retailer,” says Watson at Merrell. Lieberman agrees: “As big as online shopping is, more than 90 percent of retail transactions still happen inside a physical store location. In creating our app, our motivation was to connect consumers’ in-store shopping and online shopping activity, either before or after they visit a store.” —Audrey Goodson