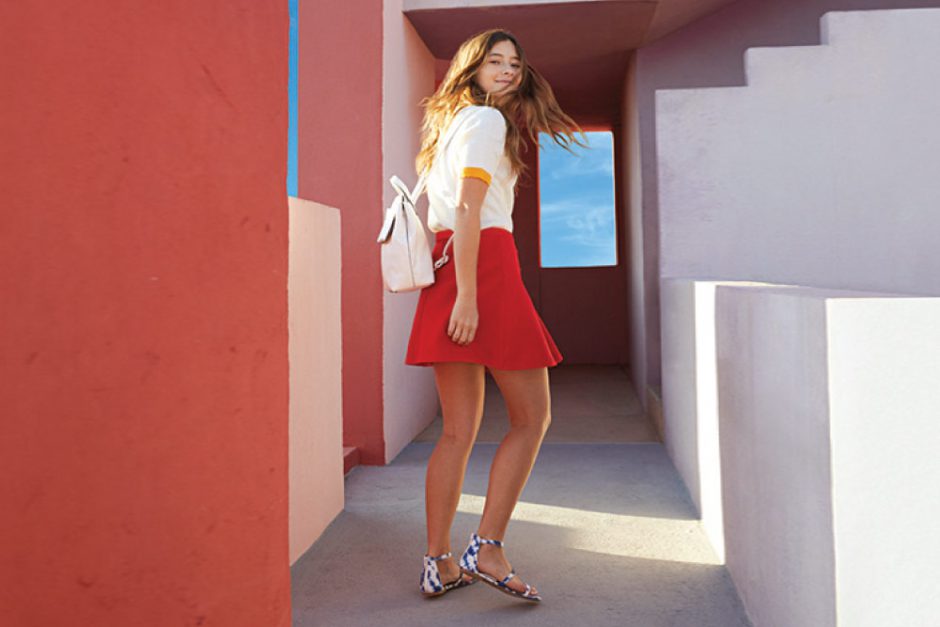 Spendthrift, entrepreneurial and smartphone-obsessed, here’s how to best reach this throwback generation.

While reams have been written about much-coveted Millennial consumers, all aimed at attracting their attention, devotion and discretionary dollars (millions upon billions of them), there’s an up-and-coming demographic marketers are now salivating over: Gen Z.  Born between 1995 and the early 2000s and making up approximately 27 percent of the global population, Generation Z (also known as Centennials, Founders and iGen) looks to soon dethrone Millennials as lead trend-drivers. And everyone take note: They may be social media savvy and comfortable shopping online—just like Millennials—but any similarities pretty much end there. Studies show this younger demographic has more in common with generations that precede Millennials and Gen X. In fact, the Center for Generational Kinetics dubbed Gen Z the “Throwback Generation” in a recent study for its collective attitude toward work, spending and saving.

“Generation Z doesn’t remember 9/11, which was such a defining moment for Millennials,” says Jason Dorsey, president of the Center for Generational Kinetics. For Millennials, 9/11 and the Financial Crisis of 2008 were instances of innocence lost. Gen Z, on the other hand, grew up with those realities, and it’s shaped them quite differently. “At a high level, Gen Z is much more frugal than Millennials, and they want to feel like they’re getting a better deal,” Dorsey says. “They’d rather buy fast-fashion or at a discount to feel like they’re stretching their dollar.” Dorsey’s study reveals one in five Gen Zers say debt should be avoided at all costs, they’re already thinking about retirement and many go to work early. (Seventy-seven percent of those age 14 to 21 currently earn their own spending money through freelance work, part-time jobs or earned allowance.)

While there are billions of discretionary dollars up for grabs as Gen Zers develop brand relationships that could flourish for decades, those dollars are much more difficult to get. “They’re spending money, but they’re not purchasing the same way as their predecessors,” says Marshal Cohen, retail industry analyst at the NPD Group. “The younger generation is all about building memories, not wardrobes. They prioritize their image and position in social media higher than fashion,” he adds.

Indeed, social media plays a huge role for this group, which has never known a world without cell phones. “Growing up connected to mobile, their attention spans are shorter than previous generations—only eight seconds,” notes Nicholas Martire, senior vice president, Aldo Group/Call It Spring. In addition, the emphasis Gen Z puts on quality isn’t quite the same as previous generations, since each outfit is only worth one social media post. “As you look at footwear, Gen Z is more utilitarian in their view about something they’re going to wear,” Dorsey says. “It’s going to go on social media. Once it’s on Instagram, they can’t wear it for a while.” To get these shoppers to buy, Dorsey adds, brands need to have a lower-price offering that is perceived as quality. “Pricing and transparency is really important to this generation,” he says. “They want to hear they’re getting a good deal, but it’s got to last or have other benefits that make sense.”

Authenticity is crucial, Cohen agrees, since this generation is good at doing its homework, thanks to the Internet. “They have the ability to do more ‘presearch’ on how to buy than their predecessors,” he says. “And they’re used to the ability to buy what they want, when they want and from whomever they want to buy at any price.”

That’s a tall order for brands and retailers to meet, but Martire believes it can be done. “This is a generation of multi-devise and multi-tasking, so from a Call It Spring standpoint our strategy has shifted to digital-first, which also focuses on ease of access to our product offering across all channels,” he says. “It’s also important to stay connected with the customers frequently and consistently, best achieved through social media.” Mobile engagement and streamlined browsing is crucial, Martire adds, reporting that 45 percent of Call It Spring’s online sales are being made on smartphones. “The power of social media has been an amazing tool for us, making it easier for new shoppers to discover us and as a way for our brand to stay relevant and connected to our current customers,” he says. Nonetheless, no amount of engagement on social platforms can take the place for trend-now styles and silhouettes at affordable prices. “Gen Z is a demographic that doesn’t have a lot of disposable income and credit cards yet, so it’s important our price point remains fair and the styles on-trend,” Martire says.

Despite its digital marketing focus, Call It Spring remains committed to its brick-and-mortar stores—in malls, no less.  Artful instillations, multimedia displays and a tightly curated assortment of product satisfy this customer’s short attention span and delight for instant gratification. NPD’s Cohen adds that while the proportion of online shopping is high in this group, they still shop in stores. “They like the store experience; they like instant gratification,” he says. Dania Shiblaq, spokesperson for Birkenstock USA, notes that the younger members of this generation have to shop in stores. “Online requires a credit card, so shopping brick-and-mortar still matters, and it also presents the opportunity to engage this group if the experience is exciting,” she says, adding, “Don’t be boring. Be authentic and express a real point of view. Presenting a sea of shoes is no longer good enough.”

Cohen cautions brands not to look at online as additional business. It’s about offering newness and innovation; it’s another language. “Gen Z doesn’t want to look at the same product for four months,” he says. An ever-changing assortment is important, agrees Rolando Garcia Jr., digital marketing manager at 361. “While Millennials shop out of necessity of the season, Gen Z shops out of necessity of an event,” he says. “They key to reaching Gen Z is through consistent, limited-edition capsule collection drops, ditching the traditional retail spring/summer, fall/winter format for a monthly or even bimonthly product offering with an emphasis on limited distribution.”

In addition to creative store installations and frequent deliveries of fresh product, Cohen advises to meet Gen Z where they’re heading. “Travel is at an all-time high, and the younger generation is all about it,” he says. “They’re going on these excursions with friends—they want to be tagged in that photo.” The travel for social media phenomenon, Cohen believes, has contributed to the recent popularity of travel-friendly brands like Birkenstock, Keen and Teva. The challenge, he adds, is for brands to get ahead of consumers in this respect. He cites the explosion of Adidas Superstars as an example: This wasn’t Adidas saying it wanted to sell a ton of Superstars, rather consumers who adopted the style and generated the demand. The ultimate goal, Cohen says, is for brands to introduce consumers to new lifestyle uses before they’re randomly adopted.

That involves more than just product, according to Dorsey. “You’re going to see Gen Z–targeted brands making consumers feel like they’re part of a movement,” he says. “They’re more socially conscious and want to feel like their money is going to something positive.” Birkenstock’s Shiblaq agrees, noting that this demographic expects brands to be socially and environmentally responsible. “They value their own perceived communities, and there is a diminishing distinction between real-world friends and their extended social network,” she says.

Experts believe this vast social network provides a golden opportunity for brands and retailers to connect with consumers on a whole new level. News and trends are found on online communities, and influencers are often more relevant (and relatable) than traditional celebrities. Gen Zers are apt to take the social media buzz at its word, albeit with a no B.S. caveat. “The more real and authentic, the more the Gen Z consumer resonates with the story you’re trying to tell,” says Martire, noting that a portion of Call It Spring’s Spring ’17 campaign was shot by 17-year-old student Nico Young from Santa Monica High School. “We also cast recognizable social media influencers as the leads in our campaigns as it’s important that our customers resonate with the images we present.” Similarly, Garcia says posting a photo with a witty caption won’t cut it with this demographic. “Gen Z loves discovery—that’s what validates their purchase behavior,” he says. “Engaging with video and de-emphasizing your social timeline is the way to market with a ‘not trying too hard’ attitude.”

It’s critical that message also comes in that aforementioned eight-second dose. “Marketing now comes in bite-sized, on-demand portions,” Shiblaq says. And, Cohen says, there’s no time like the present for footwear brands and retailers to start sending out that message to attract Gen Z.  For starters, the group’s spending power is only going to get exponentially bigger—in terms of overall size, share of spending and as they increase their income and discretionary spending power. “Shape the behavior of this consumer now so that when they get more income, they are passionate about footwear,” Cohen says.