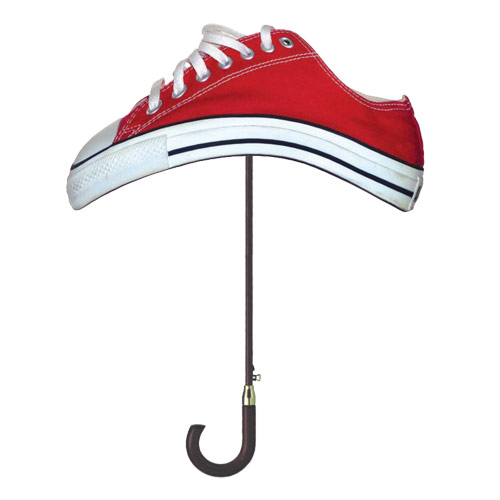 When it rains, it pours—literally for retailers offering increasingly popular waterproof boots and related accessories. Riding a recession-inspired wave toward more functional fashion, the rain boot category burst to $53 million in sales last year—a 120 percent increase over 2009, says Marshal Cohen, chief industry analyst for NPD Group, a consumer market research firm that tracks the footwear industry. “2010 was a banner year for rain boots,” Cohen confirms. “People started buying two and three pairs, and not always at the same time.” And many retailers report that foul-weather accessories—from boot liners to umbrellas—were some of their best-selling add-ons last year.

This year promises to be even bigger, as many companies—like powerhouse brands Ugg Australia and Dansko—dive into the category for the first time. And market leader Hunter continues its evolution beyond its iconic wellie with the introduction of even more platform, laceup and wedge styles. Then there’s the bad—er good—weather: Several years of miserable winters in population-rich areas form the Midwest to the Mid-Atlantic states have forced consumers to consider practicality when shopping for footwear and accessories.
Put it all together and you have the makings of a perfect storm for retailers looking to maximize returns in a rapidly emerging category. Here’s how:

“I definitely think variety is key,” says Sue Marfino, owner of Buffalo, NY-based Shoefly. “I try to carry different colors and even a couple of different styles. Most of the boots come in whole sizes, so keeping a variety helps people find something that fits,” she notes. Tatiana Glass, owner of Shoe Fetish, also stocks a large variety of rain boots at her three Northern California locations. “When we bought only two styles, we wouldn’t sell as many,” she explains. Glass finds that buying one brand exclusively—for her, Däv—allows her to offer Shoe Fetish customers a wider array of styles and colors in her boutiques’ limited space. Some retailers, however, say that carrying several different brands gives their customers a variety of price points to choose from. Andy Nastasi, owner of Downtown Shooz in Brookline, MA, carries boots ranging in price from $39 to $69, but he will be adding Ugg’s rain boots and shoes— which retail for $110—to his mix this fall.

No matter the strategy, experts agree that stocking an eclectic mix is key to keeping customers coming back for more—especially as the category continues to evolve with fashion-forward silhouettes and details. “We all want to be individualistic, and rain boots are another way we can express ourselves,” explains Rob Moehring, CEO of Washington

Shoe Company, makers of Western Chief and Chooka, which doubled its sales in 2010. “We can go from bold and bright to Goth and rocker chic to sophisticated and elegant. A boot is a large canvas for saying something— it’s a dramatic statement.” That means carrying everything from outrageous patterns to basic black. “Buying a depth of colors is important,” agrees Scott Starbuck, owner of City Soles in Chicago. But A.J. Majumdar, D&auml;̈v’s vice president of sales and merchandising, notes that the category’s continuing expansion into fashion means women are increasingly seeking a chic, sophisticated look in a neutral color palette. “Black, gunmetal and champagne are our strongest colors,” he notes.

Beyond color, successful retailers also suggest stocking a range of silhouettes, especially as a mid-height boot shaft is emerging as a big trend for fall. “I think it’s important that they have the various heights represented at retail right now,” confirms Bill Combs, president of Bogs Footwear and owner of Burch’s shoe store in Eugene, OR. “Some people want to have more of a shoe for a wet spring day or going out on a soccer field for their son or daughter’s game,” he explains. In response to the new demand, several manufacturers are releasing ankle-height boots. “We are offering a lower silhouette,” confirms Dansko’s creative director Ann Dittrich about the brand’s new weatherproof collection. “We’re offering a clog silhouette as well as an ankle boot pull-on, so that gives the ability to wear it in warmer weather.” Plus, trendy new slip-on weatherproof shoes for men, from brands like Bogs and Sperry Top-Sider, promise the possibility of gaining sales from a relatively untapped demographic. “Don’t rule out men’s as an opportunity, either,” confirms Cohen of NPD.

Forget April showers—rain boots are increasingly becoming winter wear, thanks to the introduction of both built-in and interchangeable liners. “We are truly weatherproof, meaning our collection can be worn in rain, snow and sleet, because they have a fleece lining,” explains Däv’s Majumdar. “We definitely like to have our product merchandised with cold-weather boots. If you just categorize yourself in rain, you can fall into that rubber rain boot category, which can be inexpensive.” Combs says Bogs also suggests retailers emphasize its boots can be worn nearly year-round, thanks to a neoprene lining. “Our boots sell from September all the way through to April,” he notes.

For companies like Chooka, which sells unlined rubber boots, accessories can help extend the product’s shelf life. “We sell liners, and showing those with the boots really helps,” Moehring says. The company is releasing a collection of fur-trimmed boots and socks for fall, in hopes of pleasing women seeking trendy details as well as warmer options. Marfino in Buffalo confirms that the “introduction of fleece boot liners really help move the boots through the winter.” Glass notes that even in temperate California, her customers heading to colder climes normally just buy a rain boot with socks. “You can put on socks, and you’re still not spending a ton of money as compared to a cold-weather boot.” At Nastasi’s shop, located in a Boston suburb, rain boots often sell year-round because “in the winter people get tired of throwing on a big, bulky boot. And in the city, it’s not really snow [on the ground]—it’s slushy mud puddles.”

“When it’s raining, people buy—literally,” says Starbuck. “For sure, it’s buy now, wear now.” That’s why retailers recommend maintaining a tempting window display full of eye-catching styles during traditionally rainy months. “By buying colors and brightening up our window displays and making them more fun, we find we end up selling more of the colors than we do black,” Starbuck notes. Nastasi confirms that rain boots are definitely a spur-of-the-moment purchase at his store. “It’s walk-in traffic. It’s both impulsive when they see it in the window and impulsive when its raining.” Retailers also recommend changing up the display periodically to keep windows fresh for passers-by. “We change our window once a week,” Marfino notes.

For companies like Däv, umbrellas and socks make up 20 percent of sales, and the items sell especially well when paired with matching rain boots. “We love having them in the same spot in the store. It allows the sell-through to be stronger, it makes it much easier for the customer and is something I would highly recommend,” Majumdar suggests. Glass recently added Däv umbrellas to her mix, and they “blew out,” she reports. “A lot of people buy the umbrellas with the rain boots, since they have umbrellas that match in cute prints.” Marfino recently began carrying boot liners, which she displays by placing inside her boots—a strategy that’s helped drive sales. “People were really excited about them,” she says. She also reports that clear, plastic bubble umbrellas are her best-selling accessories.