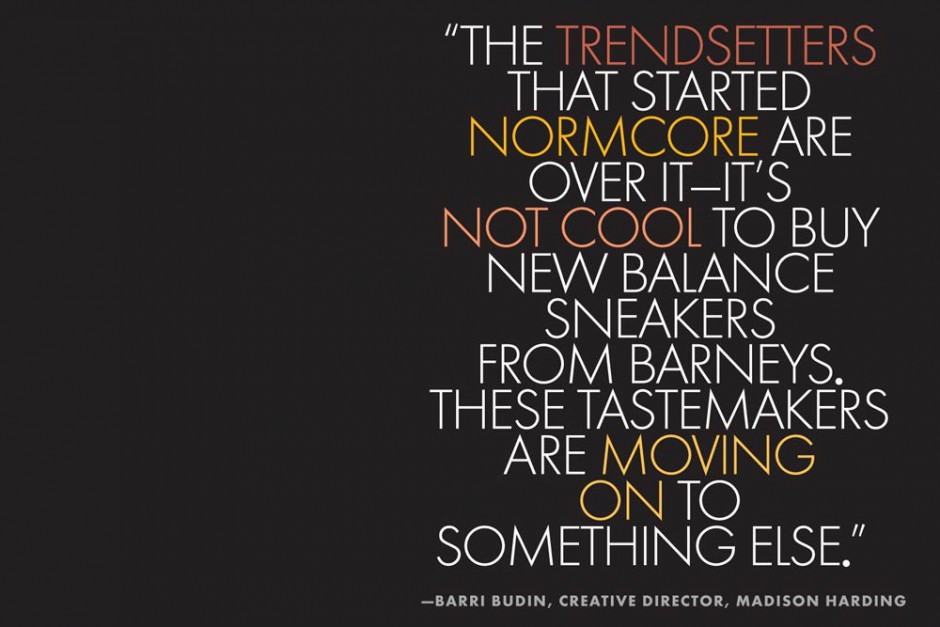 Rumors are swirling that the anti-fashion movement may be on its way out. Here’s what could be coming next.

It’s only been a year since New York magazine ran a splashy trend feature that introduced the Normcore fashion movement to the masses, which, ironically, was a fashion movement that stemmed from the masses. Hipsters and A-listers took to the anti-fashion trend that embraced bland, mainstream styling (think windbreakers, mom jeans and New Balance sneakers) as a way to thumb their collective nose at following the whims of over-the-top designers. Perhaps it was a backlash to indulgent consumerism in a post-financial collapse landscape? A new world fashion order that chose ubiquity as the new black, mainly because it was more affordable to do so. Whatever the causes that gave birth to Normcore, fashion editors, bloggers and stylists analyzed its nuances and reasons for being to, perhaps, its death. Not the look, mind you, because classic styling never really goes out of style. But the term (“normcore” currently begets more than one million hits on Google search) may be played and the fashion industry is pondering where trendsetters will be moving next.

Think evolution, not revolution. And that stems largely from Normcore’s inherent qualities of comfort and affordability. “Fashion is often unreachable for most people. [Normcore] consisted of very wearable pieces,” notes Jeanne Zornada, creative director for Charles David footwear, adding consumers could embrace it with what they already had in their closets—or their parents’ closets. “People are wearing things because they are comfortable, not because they are in fashion,” agrees Ruthie Davis, founder of her eponymous footwear label.

Barri Budin, creative director for Madison Harding, notes that while comfort is a factor behind Normcore’s popularity there’s also the fact that, “It can be fashionable at times to look like you don’t care what’s on trend—remember the ’90s?” She predicts Normcore will evolve into an overall organic lifestyle movement, playfully coined “Hickster,” that includes home-brewed beer, farm-to-table foods and the use of natural materials. “It will come from young people retreating from the city and relinquishing their ‘other life’ for a more organic experience,” she predicts. Budin describes the general aesthetic as being lumberjack-inspired. Think hand-sewn wool sweaters and Timberland boots. “The trendsetters that started Normcore are over it—it’s not cool to buy New Balance sneakers from Barneys,” she states. “These tastemakers are moving on to something else.” It’s an even further pared down version of Normcore without the complications of an over-used moniker that’s “#trending” on every social media site.

Regarding what may follow Normcore, Lucky posted a recent article speculating [we presume in jest] that it could be anything from Farmcore (overalls) to Snorecore (pajamas). On a more analytical note, Davis predicts a heavy sport and tech influence taking hold. “Normore will become more high tech and streamlined with futuristic materials and shapes,” she says. “The focus will shift toward function.” Davis anticipates metallic details, laser prints, iridescent accents and innovative materials will be important in footwear. “Everything is clean, minimal, sporty, technologically advanced and sexy,” she says of her Fall ’15 collection. She believes Normcore patrons will blend the new with the old. “They’ll mix their retro grandmother style with futuristic, colorful, sport-inspired pieces,” she says, noting that fashion houses are already using athletes to promote their goods. Indeed, brands ranging from Burberry to Bobbi Brown are enlisting athletes to further align themselves with the ongoing ath-leisure trend as the line between sportswear and professional attire becomes increasingly blurred.

Roger Hardy, vice president of merchandising at SHOEme.ca, echoes a similar sporty fashion sentiment taking hold. “We’ll even see some sort of the athletic influence tied to more traditional footwear,” he predicts. Hardy cites the continued popularity of comfort styles, but with sport-inspired updates such as bold pops of color, as playing big this fall.

Zornada predicts Normcore will evolve in a more personal direction. “People will take what they love from it and personalize it,” she says. The motivation to buy will shift from having to have what everyone else has, to buying something that will communicate personal identity. Thus,  she predicts accessories will be key, as they’ll allow consumers to make clear statements about their personal style without having to invest in an entirely new look. For Charles David’s fall collection, that translates to a focus on flats, binding the practicality of a comfort silhouette with sophisticated design. Zornada adds that unique materials will be important, featuring heritage and techy compositions in non-traditional ways to create subtle interests. “Material combinations will define products this season,” she says, noting that heavy-soled oxfords may become the style that replaces Normcore fashion staple, Adidas’ Stan Smith sneaker.

Harel Waldman, co-founder and designer of Wal & Pai, expects that the ease and insouciance of Normcore will persevere but the homogeneity of collections has to change. “There is so much copying of everything,” he says. “The customer wants something new and fresh, but still easy and sophisticated.” For Wal & Pai’s fall collection that translates to details hidden in the stitching and fabrics on an array of slip-ons and ankle boots. Natural materials such as fur, shearling, leather and wood are also prevalent as Waldman anticipates a return to craftsmanship and artisan materials. Wal & Pai places the emphasis on comfort and cozy silhouettes that can be worn all day. “People are getting tired of finagled materials and will return to luxury grains and old-school craftsmanship, but done in a way that’s modern and not too loud,” he predicts, noting that American fashions will begin to more closely resemble European designs with an emphasis on comfort, luxury and simplicity. “You don’t have to follow fashion trends to look modern, sophisticated and fashionable,” Waldman offers. “Women can look beautiful without pain, and without wearing anything too sexy or flashy.”

It’s a consumer mindset and fashion aesthetic that Waldman says is percolating through small, hip communities throughout the United States, particularly in his home base of Los Angeles. “People are wearing very comfortable, beautiful clothes, but it’s so well put together that it doesn’t look like ‘I wear designer,’” he explains. “It’s not the clothes you see, it’s the person.” Waldman adds that department stores that continue to carry too much of the same merchandise will only push shoppers toward small boutiques where they can find up-and-coming designers and less ubiquitous styles.

Dory Benami, co-owner of Peruvian-made footwear brand Fortress of Inca, shares a similar penchant for artisan craftsmanship and design simplicity. “We focus inward and utilize what is available to us in Peru—great leathers, wood and rubber,” he notes. Benami emphasizes the importance of timeless and classic silhouettes that are versatile and not too flashy as being important for Fall ’15, rather than chasing any one particular trend. The latest collection is pared down to the minimum, even the paint on the wood heels is removed for a more natural look. “Everything that is unnecessary is being stripped away, and that’s why it’s so important to have the best materials,” he explains, adding that flats and ankle boots will continue to be important, as well as an emphasis on comfort regardless of silhouette.

Budin of Madison Harding also sees the industry embracing natural materials and interpreting them in deconstructed, outdoorsy and organic ways that will coincide well with the resurgence of the ’70s-inspired trend. “We’re going to see a lot of wood and raw leathers with a focus on comfortable and casual styles,” she explains. Budin predicts a new deconstructed sneaker shape that bears resemblance to a moccasin as well as the resurgence of closed-toe clogs. Madison Harding’s fall collection will feature an array of espadrilles, moccasins, platforms and clogs. Budin adds that the heavy ’70s influence will allow for embellishment play in the form of subtle fringe and beading details.

NPD Chief Industry Analyst Marshal Cohen says consumers will ultimately decide what comes next—as always. And while he expects to see both the futuristic, sport-inspired evolution of Normcore as well as the artisan, organic offshoot come to market this year, it is yet to be determined if one aesthetic wins out. “I would lean toward the traditional, cozy comfort side,” Cohen says—at first. “But down the road, as the consumer grows accustomed to futuristic materials, they will begin to gravitate toward that.”

Regardless, Cohen says designers need to home in on their personal aesthetic and create unique products. “We need product that allows the consumer to be personal in their selections,” he notes. “Right now everyone is following the same direction.” There’s too much me-too product on the shelves. He attributes this, in part, to having greater access to information than ever before, which means all sources are pulling from the same resources. “We are looking at such a finite picture,” Cohen says. “Designers need to make it exciting to shop again. They need to make unique products that convince consumers to buy. We need reinvention!”

It’s a growing industry sentiment, actually, that runs opposed to Normcore’s premise of shunning the new. And that’s a good thing. It’s up to the fashion industry to put an end to the anti-fashion movement.