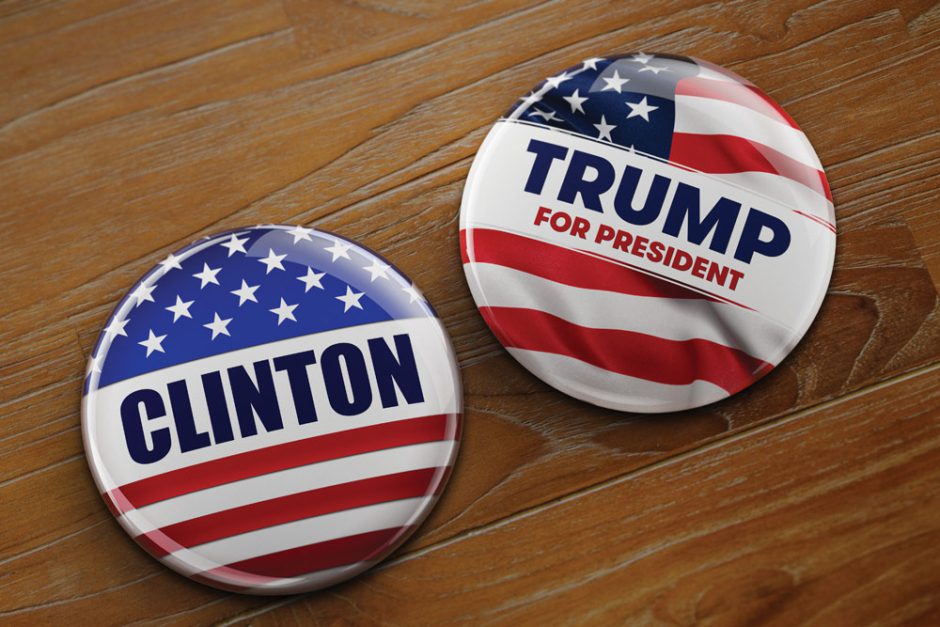 Clinton or Trump? Regardless of who the next leader of the free world may be, each will affect sourcing, sales and style in their own unique ways. Would a Donald J. Trump presidency usher in a wave of power ties? Might the pantsuit become de rigueur if Hillary Clinton becomes the first female in chief? If a wall gets built along the entire U.S./Mexico border and we enter into a trade war with China, odds are strong that it might have (just a slight) impact on the day-to-day operations of the footwear industry. Similarly, if taxes are hiked to a level that would make Bernie Sanders blush, the average American consumer may continue to be scared shop-less.

Welcome to “The Decision,” except this time LeBron James’ basketball talents have nothing to do with it. This is much bigger than that. This is the mother of all decisions. At least it sure feels that way, considering that the process and media focus has been going on for what seems like longer than both of President Barack Obama’s terms in office. To be fair, the outcome has a far greater impact than several thousand Miami Heat fans feeling jilted or Cleveland fans finally basking in a major sports championship win after 50-plus years. Such a collective celebration was a big deal, but it’s got nothing on the pending decision to be made by millions of Americans this fall about who will become the 45th president of the United States.

Once that decision is finally made, will things calm down in ’Merica? Will life get back to normal? (What is normal these days?) Might either Trump or Clinton usher in a new normal? What might that entail? Will consumers feel more confident shopping because, as we all know painfully well, that hasn’t been the case of late? What exactly might “make America great again” look like beyond a slogan on a baseball hat? Would, for example, Clinton’s proposed New College Compact aimed at greatly reducing student loan debt unleash a torrent of spending that would have otherwise gone to pay off loans? Would policies be implemented to encourage companies to share profits with employees? Would minimum wage be raised? Or would Trump’s immigration reform and trade platforms really put the needs of working families first and revive the middle class, resulting in a better alternative?

Of course, no one really knows the answers to these and many more questions. Campaign promises are by no means guaranteed outcomes, nor are many of them even kept. Just ask some of the Brexit supporters who based their decision on promises that have been backtracked on faster than a Chunnel train.

“The only certainty we face, no matter who wins, is more uncertainty,” says Nikki Baird, managing partner at Retail Systems Research. “Whether it ends up being Trump or Clinton, the consumer’s confidence will be at the minimum,” offers George Valdez, author of The Ultimate Guide to Footwear Retail Business Profits. Thanks to rampant confusion about their respective policies, he says there is an overall mindset of perpetual uncertainty, which doesn’t bode well for the economy in the near term. “If you are uncertain on what the future holds, you tend to hold onto your money a little tighter, and this means holiday sales could take a hit,” Valdez says.

While the election is a distraction, Meghan Cleary, footwear trend and market expert at shoeareyou.com, believes the uncertainty in retail goes beyond that. In her opinion, it’s symbolic of much larger problems—like the transforming business model and changing consumer shopping habits. “Retail is already under siege,” Cleary says. “Until the election is decided, it’s just another uncertain thing on top of everything else, but it certainly doesn’t help.” David Kahan, CEO of Birkenstock USA, believes uncertainty is always challenging for the consumer, and this pending election is no different. “Obviously the candidates stand apart on trade, so potential impacts are to be determined,” he says. “I think most people are in a bit of a wait-and-see mode.”

Some experts argue that making matters even more uncertain is a choice between what many view as a lesser of two evils. Deciding which candidate’s respective policies might do greater harm than good is not exactly a confidence builder. For example, Matt Priest, president of Footwear Distributors and Retailers of America (FDRA), says if Clinton increases taxes it will likely have a negative impact on shopping. “Lower the tax burden if you want to sell more shoes—when Americans have more money in their pockets, it’s good for retail,” he offers. Priest adds, however, if Trump slaps a 45 percent tariff on Chinese-made goods, it could devastate nearly the entire footwear industry (about 70 percent of shoes currently sold in this country are made in China) as well as much of the American consumer goods economy. Thus, the basis for Priest’s bleak outlook, regardless of what voters decide this fall. “There is no real silver lining right now,” he says.

Indeed, Marshal Cohen, chief industry analyst at The NPD Group, notes that both Trump and Clinton have high disapproval numbers. It involves lack of trust, class, confidence—pick your shortcoming. “There is more focus now on their disapproval ratings than approval,” he says, adding, “There would be concern on both sides.” Amber Vanwy, director of marketing for the boot company Twisted X, agrees that many Americans are not enthusiastically confident of either candidate. “Consumers will continue to be cautious either way,” she says.

Others, of course, have stronger opinions on who might make a better president. Dana Schwister, partner at Shoe Market, a Brooklyn-based boutique, feels that a Trump win would greatly affect her business, given that at least 50 percent of her customer base are tourists. “A Trump presidency could put a severe dent into our business if he goes through with his anti-immigrant policies,” she says. “It could really change the world’s perception of America and lead vacationers to choose other, more open and friendly places to visit.” Schwister estimates that a Trump win could trigger a 20 percent decrease in her store’s sales. “I am terrified of what will happen if Trump is elected,” she says. “I don’t believe that he has the skill, ability or nuance to create allies and foster an environment that can benefit people around the globe.”

Sahir Anand, vice president research and principal analyst at EKN Research, believes it will come down to who exudes the most confidence and is more business friendly. “From a consumer standpoint, confidence is going to be higher if you have a pro-business and pro-middle class framework,” he states. “If you don’t have that, business suffers and so do consumers. The candidate who focuses on confidence-boosting instead of confidence-killing will be in good standing.”

Now, about those potential power ties or pantsuit crazes. The one thing that appears certain is that whoever wins the White House will have a significant influence on fashion. “Look at the influence of Michelle Obama—and she was only the first lady,” Cohen points out. If Clinton were to win, he predicts a lot more conservative women’s dressing. “Those blue suits are going to be very important again,” he laughs. Anand says the possibility of a first woman president could bode well for women’s products in general. “There will be a huge positive push,” he says. “Women’s consumer confidence would just be a higher level of expression.” Schwister believes if Clinton is elected there will be an excitement in women’s fashion that hasn’t been seen for a long time. “This will be a huge moment in American history,” she says. “I think it would resonate deeply and lead to some great inspiration.”

Cleary envisions the kitten heel—a go-to Clinton choice—will maintain its popularity. (They have been popular with the current first lady, she adds.) Cleary would also expect Clinton’s “polished practicality vibe” to trickle down and adds that Clinton’s age group is a consumer that is overlooked in fashion, which might lead to better options for that demographic. “There are so many of these women in America, and they’re the only ones with disposable income left—Millennials don’t have it,” she says. Although, Cleary notes, Clinton’s no-nonsense vibe is similar to Millennial tastes in dressing for who they are and what they’re doing instead of just following the next hot trend.

Vanwy believes that both candidates could usher in a return to “luxe,” but it would manifest differently. “With Hillary, I could see no-nonsense high power heels and suits for ladies with understated accents,” she says. “With Trump, I could see it revealing itself in over-the-top looks and the use of metal, specifically gold.” Given Trump has a fashion line attached to his name and “the great promoter that he is,” Priest imagines his win would have an influence on fashion. Cohen says the focus for men’s footwear would likely become dressier and conservative, adding that Trump’s wife, a former model, could strongly influence women’s fashions as well. “This could result in higher heels and sexy dressing trends,” he says.

“You’re never going to see Melania [Trump] out of a stiletto,” offers Cleary. It is hard to imagine the fashion-forward women surrounding Trump (including Melania, Ivanka and Tiffany) not making major waves in fashion. “That kind of societal upheaval can yield big changes in footwear—we’d probably see choices becoming more strident and wild,” Cleary says.

Until then, the fashion, footwear and free worlds anxiously await America’s big decision.