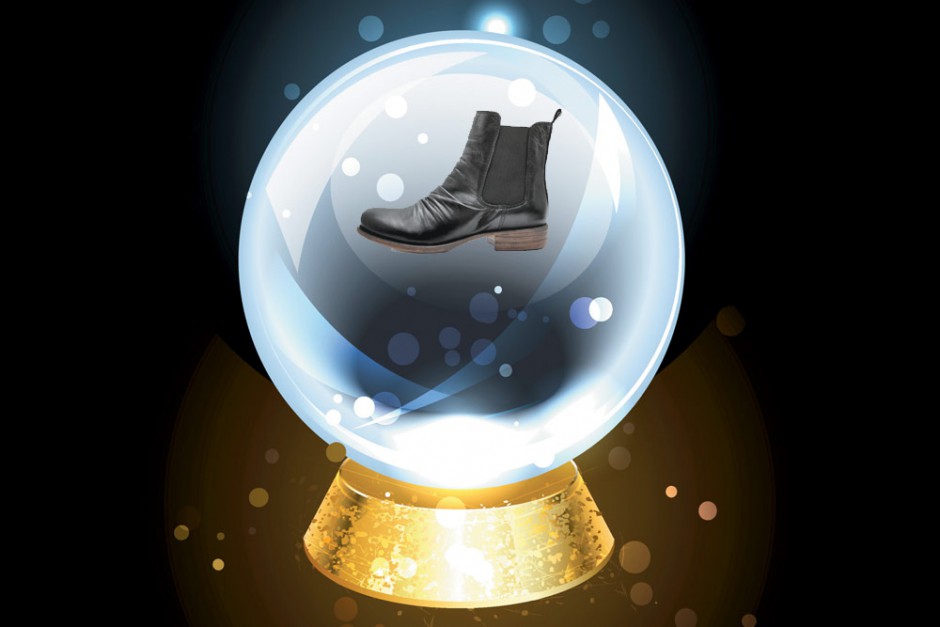 A Real Fall for All

T’S LITTLE SURPRISE that the boot silhouette is expected to reign supreme next fall. ’Tis the season; however, unlike the past several years when a particular brand, silhouette or aesthetic ruled, this upcoming fall looks to be much more of a style free-for-all. Trends in the offering span open-toe and low-cut booties—like the current street style fave, Chelsea boot—to a Western revival, a strong chunky-soled ’90s-inspired statement, an androgynous dressing movement, a ’70s-era nod to suede and block heels, and tapping into the sports-inspired athleisure apparel craze. (Think boots that pair well with yoga pants.)

Whatever the trend, wholesalers, retailers and trend analysts predict boots that combine fashion and function will play big next fall. Versatility is the buzzword of the season, where styles can go from day to night, wet to dry, warm to cold, office to weekend, etc. Carrie Hill, senior designer and developer for Wolverine, says millennial-age consumers, in particular, seek more bang for their buck and help fuel the fashion-with-function boot movement. “They are looking for a versatile product that is functional and fits their sense of style,” she says. It equates to waterproof membranes, sneaker-like comfort technologies and streamlined silhouettes. And while many industry members await the next runaway boot trend to bank on, in the meantime variety looks to be how next season’s boot market will play out. With plenty of trends to choose from, it’ll take a sharp eye and really knowing your target customer to merchandise your mix successfully.

So here’s the low down—literally. After several seasons of knee-high riding boots and tall Victorian-inspired lace-ups, as well as a brief run of over-the-knee looks (best suitable for those blessed with long limbs), short boots have moved to the front of the line. “We are seeing a shift in how women are wearing their boots,” notes Sally Murphy, manager of women’s product design at Cobb Hill, a division of New Balance. Women, she says, are seeking fashion versatility, and short boots pair well with a range of outfits. “The lifetime of an ankle boot is much longer and extends to the interim seasons,” she notes. “Cropped and tight ankle jeans are also a lot easier to wear with short boots. Both fashion and the weather are pushing for the ankle boot.”

Amber Vanwy, director of marketing at Rocky Brands and makers of Durango, notes the year-round appeal of boots is contributing to the growing popularity of lower-shaft looks. “Women wearing boots all year round lends itself to short looks,” she says. Vanwy also cites the popularity of skinny, cropped jeans and leggings as driving the trend. She adds that it’s an exciting time to be in the boot business because the broader receptiveness to more styles (and brands), as well as a 12-month season, means plenty more opportunities to sell merchandise. “We like that consumers are wearing them longer,” she confirms.

Kate Smith, senior fashion and retail analyst at Editd, reports that the number of women’s ankle boots on display at retail shot up significantly from a year ago. If the recent rounds at the FFANY show in New York were any indication, next fall looks to continue on the trend, be it western chic styles, block heels or biker-inspired buckles. Sasha Sarokin, buying manager for Net-A-Porter, predicts, in particular, that ’70s-era themes will be popular next season. “Block heels, suede, earthy browns and patchwork remain key,” she says. Debra Bloom, buying director for Dune London, also references the ’70s-inspired catwalk collections as a main source of inspiration for its collection. “It’s clean and sleek takes on platforms,” she offers, adding other popular looks from that era span block heel ankle boots to English-inspired Chelsea styles. “We’re placing our bets on the western ankle boot, re-interpreted in a sexy, sleek and sophisticated way,” she adds.

Orietta Pelizzari, fashion and lifestyle trend analyst for Mattori Studio, expects the western trend, which has been percolating since Chanel’s 2014 pre-fall Dallas-inspired collection, to be important for next fall. “It’s the evolution of cowgirl chic,” she says, adding, “We’re seeing more fitted and sexy western styles.” Think narrow toe boxes and wood stacked heels that update classic western shapes, lending them a more modern feel. Vanwy agrees that the cowgirl look is trending strong among fashion designers. “Some give a nod to old school cowboy designs while others lean toward new looks with feathers and fringe,” she notes. Along with distressed browns and classic black, Vanwy says popular pops of colors include turquoise, orchid and lilac.

Men’s tailoring looks to be another key trend for fall. From chunkier masculine soles to intricate haberdashery details and wingtip-inspired perforations, women’s boots are given an androgynous makeover. “Menswear trends were all over the runways,” notes Murphy, adding it reflects a pendulum swing away from overly ornate collections of the past few seasons. In particular, Chelsea boots, brogues and oxford-inspired slip-on booties translate this trend best while perforations and fabric inlays offer more subtle call outs. Along those lines, Victoria Haddon from H by Hudson predicts that the pointed-toe block heeled Chelsea boot will be one of the “it” shoes of the season.

Smith reports that boot styles, in general, have bulked up as dainty heels, stilettos and kitten heels have fallen out of favor. “They just don’t suit the functional, sporty aesthetic that fashion favors at the moment,” she says. Smith adds that the active wear trend has not only brought sneaker brands to the fashion forefront but also forced non-sport brands to produce more functional and colorful looks. “Key trends for the season include heavy contrast-color rubber soles that continue the summer success of ‘ugly’ footwear shapes,” she says.

“The athletic trend has allowed brands such as Wolverine to go crazy with color,” says Hill. Intense blues, bright reds and hints of metallic can be found sprinkled throughout the brand’s latest collection. Sarokin reports even the fashion-forward Net-A-Porter customer is looking for more functional and sport-inspired boots. Brands on the e-tailer’s site delivering on that look span Miu Miu to Nike. One might argue that Sorel is the Godfather of this trend. Erin Sander, global director for the Columbia subsidiary, says sport details in its Fall ’15 collection include neoprene accents, rubber outsoles and pops of colors, as well as a new take on sneaker boots that feature a built-in wedge, waterproof full-grain leather and coated canvas with two-tone pops of colors. “Our designers took a lot of inspiration this year from the athletic and fitness trends,” she confirms. Murphy also cites a sport trend influence in Cobb Hill’s collection. She confesses to having played down its New Balance connections before, but now it’s a crucial part of the design process. “We are focused on sport bottoms that make boots functional but also cute,” she offers, noting the sport category is becoming increasingly important. “Look at what women wear on the weekends—gym clothes are no longer just for the gym, and women aren’t going to wear that style with riding boots.” Murphy believes short, lace-up hikers and moon boot-inspired styles will be popular looks next fall.

Vanwy says the sport influence is even being incorporated into western designs. For example, Durango tweaked the durometer of its outsoles, incorporating a softer and more shock-absorbing rubber material. “We are taking out the weight and adding in a comfort aspect, but still keeping the silhouettes the same,” she explains. Vanwy adds, “It incorporates the comfort and function of athletic footwear without taking away from our heritage designs.” Pelizzari cites Chanel and Alexander Wang as pioneers in fusing technical fabrications, like stretch leather, neoprene and nylon, into fashion boots. She says it offers a comfort benefit and meets an aesthetic appeal—one that is best realized in styles that combine menswear tailoring, athletic details and dynamic outsoles with linear, body-inspired shapes.

A few key embellishment stories will still play a role amid this minimal, athletic boot landscape. Multiple buckles and straps are prevalent across many collections, which some experts say stems from the growing influence of music festival fashion. “We are seeing long loose flowing pants and sleeves,” notes Vanwy. The result is a lot of “boho-inspired” extras, including feathers, embroidery and fringe. Murphy says mixed textures are another way to add interest to otherwise minimal styles. “We keep the boots tonal but add blocking interest through textures such as supple leathers paired with antique suede,” she says.

On-trend textures range from futuristic to heritage. Sander lists military-inspired textiles, geometric patterns, mixed materials, rich leathers, wool, nylon and knits as trending for this fall. Pelizzari cites material treatments such as brushing, washing, distressing and embossing as being important themes. Whatever the material, waterproof linings are increasingly becoming a standard expectation. “Waterproof casual boots are more versatile,” Murphy says. “You aren’t dictated by whether it snows or rains.” Hush Puppies, Geox, Emu and Caterpillar are all introducing waterproof suede and leather styles to their lines next fall.

On the men’s side, style with function versatility is also the name of the game. “Our customers have been gravitating towards hybrid styles where formal and casual meet, be it dressier uppers with a more casual outsole to suit an urban lifestyle,” explains Justin Burzynski, men’s director for Dune London. Smith predicts important details in this gender will include loop eyelets, hiking silhouettes, contrast rubberized soles and tweed and herringbone paneling. Boots, in general, continue to gain in popularity among male consumers. “Men’s fashion moves slowly but we are finally starting to see them getting into more interesting styles and little color pops,” says Murphy. Popular silhouettes for fall look to be the classic Chelsea, chukka and desert silhouettes as well as brogue-inspired lace-ups and engineer boots. “Women have always bought boots,” notes Vanwy, “But as more and more men enter the category…That will make a big difference.”