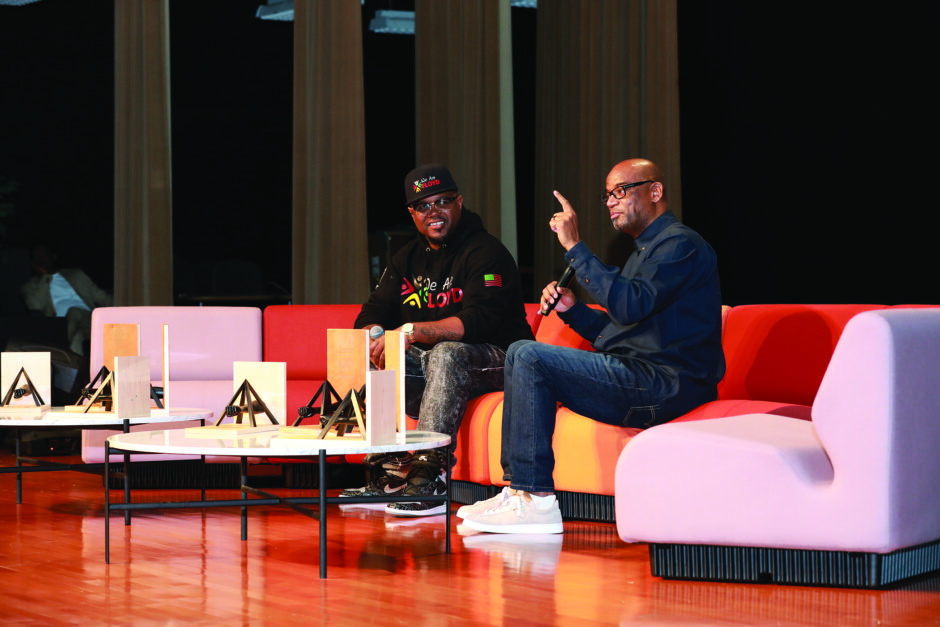 PLC welcomed its inaugural class of 31 aspiring design students in early May.

From the opening of the Pensole Lewis College of Business & Design (PLC) to the in-person return of Black Footwear Forum (BFF), 2022 was a very good year for Dr. D’Wayne Edwards, PLC founder and host of the BFF. Both in Detroit, PLC welcomed its inaugural class of 31 aspiring design students in early May, while the BFF, in partnership with the FDRA, saw more than 500 industry leaders and aspiring professionals meet over three days in mid-September at the school for networking and community outreach events. Edwards’ year was also highlighted by the soft opening, in partnership with Designer Brands, of the first black-owned U.S. footwear factory, JEMS by Pensole, that will soon feature designs by PLC students sold at DSW stores.

Looking back on a busy and successful year, Edwards sums it up in a word: humbling. “I never dreamed this big before,” the renowned former Nike designer says, adding that the support of his team and supporters made it all possible. “What we’re trying to achieve has a much bigger purpose and impact that will last beyond our time here on Earth.”

Edwards recalls many highlights throughout 2022, but the biggest was the reopening of PLC, Michigan’s first and only Historically Black College or University (HBCU) and only such institution focused on design. “Detroit and the footwear industry have supported us both financially and emotionally,” he says. “It’s one thing to have a vision, but when people run with that and make it bigger than what you originally envisioned is a whole other level.” Edwards believes PLC and BFF will only get bigger and better in the years ahead.

Like, for example, BFF again holding its event at PLC’s new Detroit digs. Edwards says the  industry members who saw what PLC is doing served as an aha moment. “It really clicked for a lot of attendees, especially those who’ve known us since our Pensole Design School days in Portland,” he says. “To see the difference in what we’re doing now in Detroit was huge. Layer on that the fellowship and togetherness that BFF has always brought, and that brought everything to next level status.”

A BFF highlight was the downtown pop-up lounge created in partnership with sneaker reseller, StockX. Designed to showcase PLC to the community, the space featured a Kicks magazine tribute to Black designers whose shoes have graced its covers the past 25 years. In addition, Champion powered an art showcase and panel discussion with Detroit artists, and BFF hosted “Kids Are Ready for Design” that saw 200-plus middle schoolers attend a panel discussion led by award-winning designer, entrepreneur and educator, Jason Mayden. “These kids have seen the shoes these designers have created, but probably never knew that the people looked like them,” Edwards says.

This year’s BFF was titled “Homecoming,” which played on PLC’s campus setting that enabled attendees to reconnect, celebrate, educate, inspire and recognize Black creatives working in the industry. It kicked off with a conversation with Terrence Floyd, brother of George Floyd, who was murdered by a Minneapolis police officer exactly 845 days prior. Edwards believes that set the tone for BFF. “I explained to Terrence that his brother didn’t die in vain,” he says. “That the majority of the audience would have never been in or would have taken them a whole lot longer to be in the industry thanks to the $50 billion in corporate pledges made since. We wanted to make sure that he understood that his family has impacted an entire industry that will always remember that.”

On that note, Edwards is moving full steam ahead on PLC and BFF plans for 2023 and beyond. There will be more PLC classes sponsored by leading brands and the BFF next summer (date TBD) will feature an in-depth slate, including professional development services; more activations for women, high school and college students; and a possible CEO summit. “BFF has an opportunity to really grow beyond a forum and have a generational impact on kids trying to get into the industry as well as help elevate those who are already in it,” Edwards says.

With regards to PLC, Edwards sees the school as on the cutting edge of design education. Rather than the traditional—and quite expensive—four-year college route, he believes PLC’s approach is more affordable and in line with what many corporations are seeking today. “We’re creating new educational methods that give students the exact knowledge they need to be employable,” he explains, noting the focus is on credential programs co-created and certified by industry companies. “Having, for example, certified credentials from Nike versus a four-year degree from some college is more attractive to employers.” Edwards adds, “We consider PLC to be the industry’s college.”

Taking stock on 2022, Edwards says there were plenty of challenges  but most were overcome. Regardless, he refused to get bogged down by dwelling on the negatives. “Things didn’t always go as planned, but I used that as motivation to keep moving forward,” Edwards says, noting that education is a “show me” industry. “PLC is my ultimate design assignment: Taking all these ideas in my head and building a team to bring it to life. We came a long way in 2022.”

In fact, Edwards’ goal back in 2011, when he left his design career behind to pursue education full-time, was for people to “forget I ever designed shoes.” Mission being accomplished, as he is receiving far greater recognition for his educational efforts and accomplishments. “It means I’m doing something way more important in this chapter of my life than I did in my first chapter,” Edwards says.