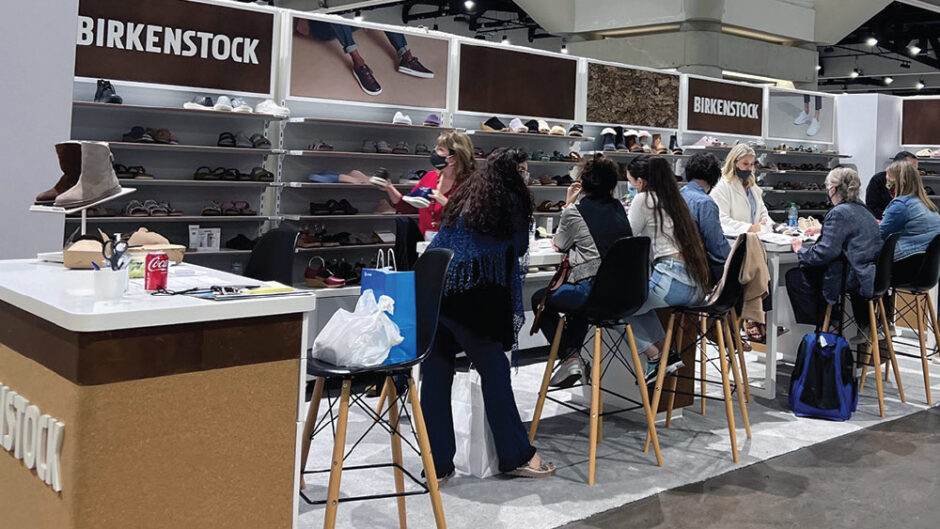 Those in attendance at the San Diego Convention Center reported a resounding success.

Despite headwinds such as a new show, a new destination and the Covid-19 Omicron variant, the first-ever Innovative Retail (IR) Show in San Diego last month hit the ground running. Those in attendance at the San Diego Convention Center reported a resounding success.

“My sales team was jammed almost back-to-back the entire show,” reports David Kahan, CEO of Birkenstock Americas, citing the earlier timing (Feb. 1-3) as key. “It’s in our futures booking window, which made these true order writing sessions, so the time was highly productive. Show dates that fall beyond our order season become social events, and that’s ok, but for the time and energy, it’s far more productive when a show can meet the schedule of key brands.”

“IR was excellent for Ara,” reports Sam Spears, president of the German brand’s North American division. “The traffic was very good—we had many fixed appointments and several unexpected stop-ins.” Spears adds that the buyer attendance was impressive. “We met with high-quality retailers from the East Coast, Midwest and West Coast. The retailers represented were the best of the best.”

That included Tradehome Shoes, the 120-plus store chain headquartered in Minnesota. Justin Kehrwald, president and CEO, says IR delivered. “The show gave us an opportunity to see some brands that may not have been on our proverbial radar and to see physical samples from many brands that we only got to see virtually,” he says. “Additionally, with the early deadlines presented to us this year, IR gave us the chance to see some running changes to many of our accounts’ product lines and to shore up any possible gaps that we believed we had in our assortment.” Then there was the allure of San Diego, Kehrwald adds. “Being a Twin Cities-based company, it was nice to thaw out for a few days,” he says. “The airport is simple to fly in and out of, the convention center and hotels are nearby and the Gaslamp District has everything you need as far and restaurants and entertainment. Also, IR was set up to allow vendors and retailers to get their work done but also enjoy the camaraderie.”

Rich Rask, president of Rieker Shoe Corp., says IR hit on exactly what many wholesalers are looking for: a strong regional show. “Regional shows are more focused, easier to work and easier to attend for both retailers and sales teams,” he says. “We’ll definitely be back this August.”

Adam Beck, president of Beck’s Shoes, a 21-store comfort and work chain in seven western states, concurs on the ease of attending IR. “Everything was walkable—food, entertainment, convention center,” he says. “And the airport is close, which is a huge plus!” As for the business of buying, Beck says the show delivered. “We saw all the vendors, as well as many that we didn’t plan on,” he says. “A lot of people said it reminded them of the old WSA show, and I’d agree. I feel Atlanta (Shoe Market) and IR are going to be the future of shows.”

John Holden, director of merchandising for Sole Provisions, an 18-store collection of comfort chains including Pegasus Footwear in New York, Alan’s Shoes in Arizona and Benjamin Lovell in Pennsylvania, says IR met its objectives. “We saw most of our important partners and reconnected with some from the past, as well,” he reports. “We even found a new brand. And we finalized some marketing objectives and mingled with industry friends.”

Meeting objectives is music to IR Show Director Gary Hauss’ ears. The fact that many attendees reported an old WSA vibe was a cherry on top. “There’s always been a need to maintain a West Coast show presence,” he says, noting that the Atlanta show served as inspiration. “They’ve created a great show, and their attendance proves that people are ready to go back to shows. We hope that between Atlanta and IR, we can give our industry the much needed in-person shows.”

On that note, Hauss believes IR’s under one roof, affordable, writing format were other factors contributing to its success. “Many brands reported that more retailers wrote more orders than any other show of late,” he says, adding that goal going forward is for IR to be a place for everyone to reconvene every six months to keep the industry moving forward. “The pandemic has made us all realize the importance of going back to the basics,” he says. “You don’t have to be the biggest, you just have to be the best. Our goal is to grow the show, but maintain our family feel. We encourage community over competition.”

Most attendees believe San Diego is a key ingredient to IR’s recipe—starting with the fact that it’s not Las Vegas.
“San Diego is easy to get to from anywhere, and the airport is only 10 minutes from the convention center,” Hauss says. “The weather is ideal year-round, there are a ton of restaurants and hotels in walking distance to the convention center and the city has a laidback feel—very different from The Strip or the streets of New York.” Hauss, a retailer of 40-plus years, knows what he speaks of when it comes to walking trade shows. “We want to be sure our vendors are getting more bang for their buck and that retailers support their brands as well as be on the lookout for the next big thing,” he says.

Kahan, a former WSA Show director from a past life, agrees that San Diego is a key draw. “Fantastic weather, easy travel location and no show buses, taxi lines or walking through casinos,” he says. “IR is a simple set-up, easy to work, lower costs and better timing.” Kahan adds, “We don’t need the bells and whistles of shows past. All a show has to do is offer a great venue that draws traffic so retailers can wok current vendors and be able to shop potential new ones.”

It’s why Spears says Ara will be returning to IR in August. “One hundred percent yes we’ll be back, because of the quality of the retailers and the business we conducted,” he says. “And the venue couldn’t have been easier—from parking to schlepping samples to booth setup to tear-down…this is how a show should be run.”