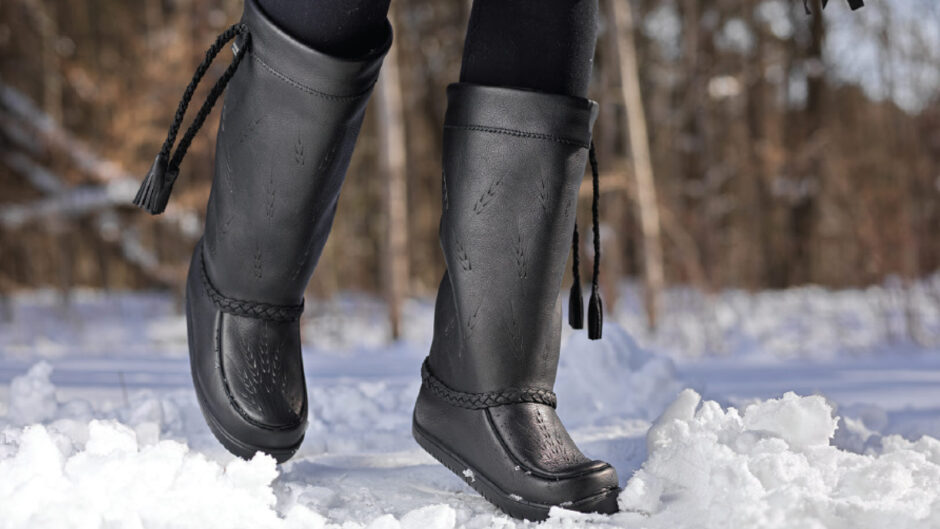 It’s an opportunity he couldn’t pass up. Greg Tunney, most recently global president of Wolverine Worldwide, is now CEO of Manitobah Mukluks, which is under a new ownership agreement between the Montreal Lake Cree Nation and Seattle-based investment firm Endeavour Capital.

Tunney, who had spent the past 18 months working with numerous private equity firms advising on potential footwear acquisitions, was open to “one last rodeo,” but there were a handful of requirements that had to be met first. 1. Work with good people. 2. Partner with a private equity firm willing to invest in the business and not “leverage the hell out of it.” 3. Sales, marketing and product headquarters based near home in Park City, UT.  4. Manage a brand with a strong social impact purpose. The Manitobah Mukluks opportunity ticked all the boxes.

“Very few brands have a real purpose; the majority are in business to make transactions,” Tunney says. “Manitobah Mukluks has a real brand purpose that makes a social impact in the lives of Indigenous communities each and every day.”

Founded in 1997 by Sean McCormick (now Chief Impact Officer and a member of the company’s Board of Directors), Manitobah Mukluks is known for the social impact it provides through numerous community programs, including its Storyboots School, which teaches traditional mukluk- and moccasin-making skills. The company also prides itself on Indigenous employment and vendors, in addition to its partnerships with Indigenous artists. “The fact that the brand was created by the Indigenous community and over 50 percent of the employees are Indigenous, including many artisans and craftsman who bring authenticity to the product every day, is inspiring,” Tunney says, noting that having grown up in Arizona, home to some of the largest Native American communities, he learned early on to respect those communities. “I’m excited to be able to give back. I also love the premium products that Manitobah Mukluks creates,” he adds.

Speaking of which, Tunney says the immediate focus for 2022 will be on new product creation. “We’ve brought in a best-in-class product team that will be launching three major new categories: Modern Mukluks (athletic-inspired bottoms with traditional moc toe uppers), Mountain Mukluks (functional hiker fashion looks) and an outdoor-inspired slippers,” he says. “We’ll create more new products this year than the company has in the past 10 years combined.” Helping in this effort is newly appointed board member, Connie Rishwain, former president of Ugg. “Connie brings a lot of expertise and experience to the premium shearling business. I don’t believe anyone else in the world has the track record and knowledge that she does,” Tunney says, adding that other key team members include Kenny Beaulieu, former head of product at Timberland as Chief Product Officer, and Aaron Carpenter, former Chief Marketing Officer of The North Face, who will serve in the same capacity.

Then there’s the financial muscle brought by Endeavour. The firm has a track record of being the first outside investor in privately held companies, providing capital and support to existing management teams so they can achieve their full visions. “We are the first one in their latest round of funding, and they want to invest in other footwear companies in this round,” Tunney says. Adds Bradaigh Wagner, a managing director at Endeavour: “Manitobah Mukluks is an exceptional company doing exceptional work. We’re honored to partner with Sean, Montreal Lake Cree Nation and the entire team at Manitobah Mukluks to help them navigate the growth of their brand and the preservation of their important social mission.”

Since 1997, Manitobah Mukluks has grown from a single store in Manitoba, Canada to a global brand sold in more than 50 countries. Its luxury shearling footwear (average SRPs are $200-plus) combines traditional and modern design with technological innovations. Many of the styles are rooted from the past 10,000 years of inspiration from the Indigenous communities, but Tunney also credits the team for doing a “wonderful job” interpreting the past with modern styling that’s relevant, commercial and authentic.

Along those lines, Tunney says the Manitobah Mukluks target customer is men and women, around 40 years of age, outdoor-inspired and desire authentic brands with purpose. As to where those customers will be able to shop the brand, distribution will be very focused to start: Dillard’s, Farfetch, Neiman Marcus, Saks Fifth Avenue, Nordstrom and Zappos. The reason for the select distribution, Tunney says, is mainly due to current manufacturing capacities and the need to find additional factory partners for the new collections. “Even if we wanted to open 1,000 independents out of the gate, we don’t have the production capacity to do so right now,” he says, noting Manitobah Mukluks owns its factories in Vietnam. “As we get more production opened up and can guarantee deliveries, we’ll open more accounts. Besides, the worst thing you can do is promise somebody delivery and then don’t deliver.”

In the meantime, Tunney is brimming with great expectations for Manitobah Mukluks—an excitement generated by new ownership, new investment and new offices in downtown Park City that, when completed, will feature a flagship store. What’s not to love? “I’m doing what I love, which is my passion for the footwear industry,” he says. “I’m working with really good people in a purpose-driven brand that keeps giving back to the community. It’s such an amazing story that when people learn about it, they really desire to be part of this brand.”