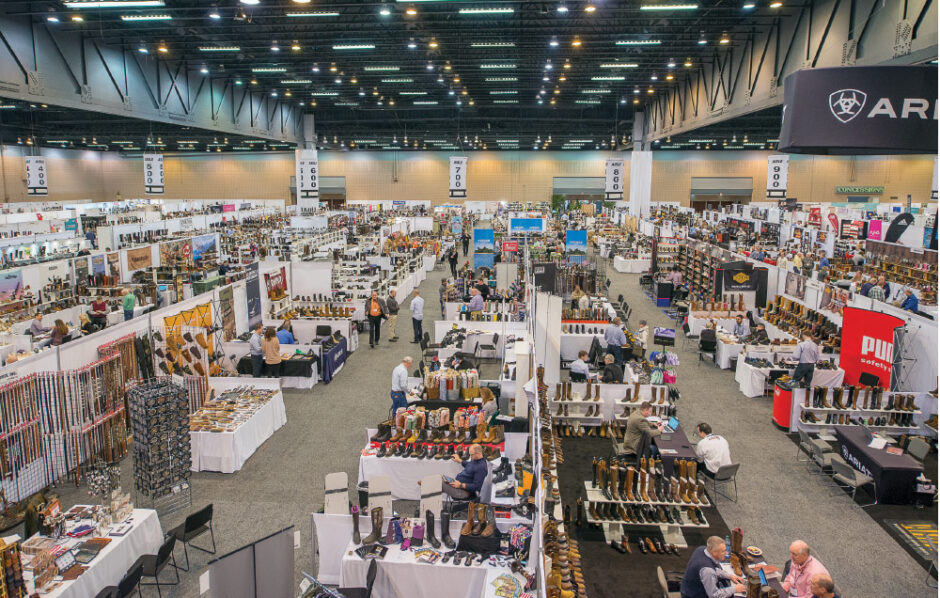 February edition to be the biggest in its 79-year history.

It will take a Fashion Village for The Atlanta Shoe Market (TASM) to accommodate the exhibitor demand for its upcoming edition—the largest in the show’s 79-year history—at the Cobb Galleria Centre (Feb. 18-20). The new section, housed on the main floor near Skechers, will feature 30 brands, 22 of which are international and first-timers at TASM.

The brainchild of Show Director Laura Conwell-O’Brien, the Fashion Village will be in addition to the 181 exhibitors in the show’s existing upscale zone. It’ll feature the same plush white carpeting and signage vibe. “It sold out within four hours,” she reports, noting that an adjacent hotel ballroom was not an option. “That wouldn’t be good exposure for first-time exhibitors,” she says. Instead, Conwell-O’Brien reworked the floorplan to incorporate more exhibitors. “I cannot fit one more booth in this space,” she says. “We completely sold out by early December.”

Conwell-O’Brien attributes TASM’s growth into unofficial national shoe show status to consistency. That spans location, timing and events, such as the free Casino Night and Cocktail Reception (Feb. 18, 6-9:30 p.m. at the Cobb Energy Centre) and the NSRA seminar (Feb. 19, 7:15-8:45 a.m. at the Highlands Room in the Renaissance Hotel). This year’s seminar, “It’s Time to Turn Your Frustrations into Freedoms. The Framework for Clarity and Communication,” will be hosted by Pete Mohr, creator of the podcast, Simplifying Entrepreneurship.

Affordability remains another TASM priority for exhibitors and buyers, according to Conwell-O’Brien. That includes booth rates, set-up costs and subsidized buyer lunches, among other expenses. “We’re a non-profit organization,” she says, noting the show will be 40 percent bigger than the Aug. 2019 edition. “We’re the largest footwear show, regardless of what other shows might be claiming.”

After years of finding clever ways to accommodate more exhibitors (63 new ones in total for this upcoming show), it begs the question: Can TASM still grow? The answer is yes, and much of it may be apparel brands in adjacent hotel ballrooms. “Apparel has a lot of potential growth for footwear buyers, and I believe many would make the short walk to shop that collection,” Conwell-O’Brien says. That could be this August—provided she can gather 30 to 40 brands to exhibit. “I won’t just sell space to a few,” she says. “It must be meaningful for exhibitors and buyers, and I’m confident we can.”

In the meantime, Conwell-O’Brien keeps doing what’s she’s done successfully for 42 years: “Organizing a big yet small-feel show with a great vibe.” Looking back on TASM’s growth and the adjacent environs, like Truist Park and The Battery entertainment district, she says it’s become a great destination. “We’ve grown together,”  Conwell-O’Brien says. “We’ll keep the good mojo going to do what it takes to make a great show.”