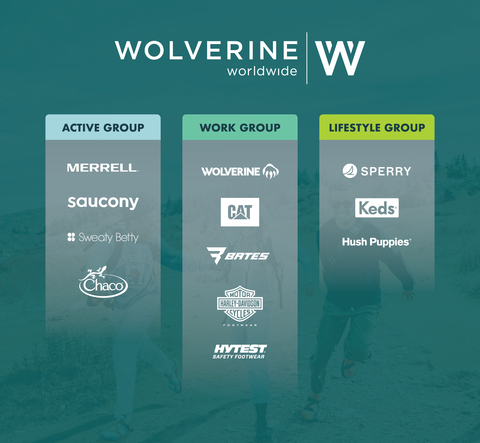 Wolverine Worldwide has reorganized its brand group structure into Active, Work and Lifestyle groups, to better leverage common product and consumer categories, align with the Rockford, MI-based company’s view of its global portfolio and provide increased transparency to investors. As part of that initiative, the company has appointed new leaders of these brand groups.

“The new group reporting structure announced today is a natural progression of our business as it combines brands that share similar traits under one segment, which we expect will pave the way for increased collaboration, sharing of best practices and ultimately value creation for our shareholders,” states Brendan Hoffman, president and CEO. “I believe this new group structure will unlock our potential to not only grow faster but also become a more efficient and simplified organization that delivers industry-leading margins.”

New Brand Group Structure (as of fourth quarter of fiscal 2022):

Kids footwear results from Saucony, Sperry, Keds, Merrell, Hush Puppies and Cat will be reported within the applicable brand.

“Our new reporting structure will allow us to focus on the brands and product categories that have the biggest opportunities to maximize future value creation,” says said Mike Stornant, executive vice president and CCO. “We will prioritize future investments and resource allocation to the areas that we expect to generate the greatest return,. This new segment presentation also provides investors and other stakeholders improved visibility into the underlying performance and results.”

Chris Hufnagel: President of the Active Group. Saucony and Chaco will now report into Hufnagel, who will also continue leading Merrell. Sweaty Betty will continue reporting into Hoffman. Hufnagel is a 14-year veteran of the company and has held several key leadership roles, including Global President of Merrell since September 2019, Global President of Cat Footwear and Corporate Senior Vice President and Head of Strategy. Prior to joining Wolverine Worldwide, Hufnagel held senior leadership roles at Under Armour, Gap and Abercrombie & Fitch.

Tom Kennedy: President of the Work Group. Wolverine, Cat, Bates, Harley-Davidson and Hytest will continue reporting into him. Kennedy is a seven-year veteran of the company and has held several key leadership roles, including Global President of Sperry and President of Apparel and Accessories. Prior to joining Wolverine Worldwide, Kennedy held senior leadership positions at Nike, Gap, Fossil and PacSun.

Katherine Cousins: President of the Lifestyle Group. The Hush Puppies brand will now report into Cousins, who joined the company as President of Sperry in 2021 and has also overseen Keds since the beginning of 2022. Prior to joining Wolverine Worldwide,  Cousins served as VP and General Manager of the Kodiak, Terra and Work Authority brands at VF Corp. and led global strategy, consumer research, licensing and accessories for Timberland.

“Chris, Tom, and Katherine are each uniquely qualified for their new leadership appointments and bring significant breadth and depth of experience in leading global brands that deliver consistent and profitable growth,” Hoffman states. “I am confident that their successful track records and leadership skills will elevate and enhance the portfolio of brands that they will each lead. I am equally confident that the range of changes announced today will unlock efficiencies and value creation across the business, laying a strong foundation for robust and sustainable future growth.”

Wolverine Worldwide has also established a Profit Improvement Office to identify cost savings, increase efficiencies and enable investments that will fuel future growth. “Our overarching goal is to deliver consistent and enhanced revenue and profit growth that will put the business on an accelerated path to return to and ultimately exceed 12 percent operating margin,” Hoffman states. “I firmly believe the changes announced today are fundamental steps towards achieving our goals.”