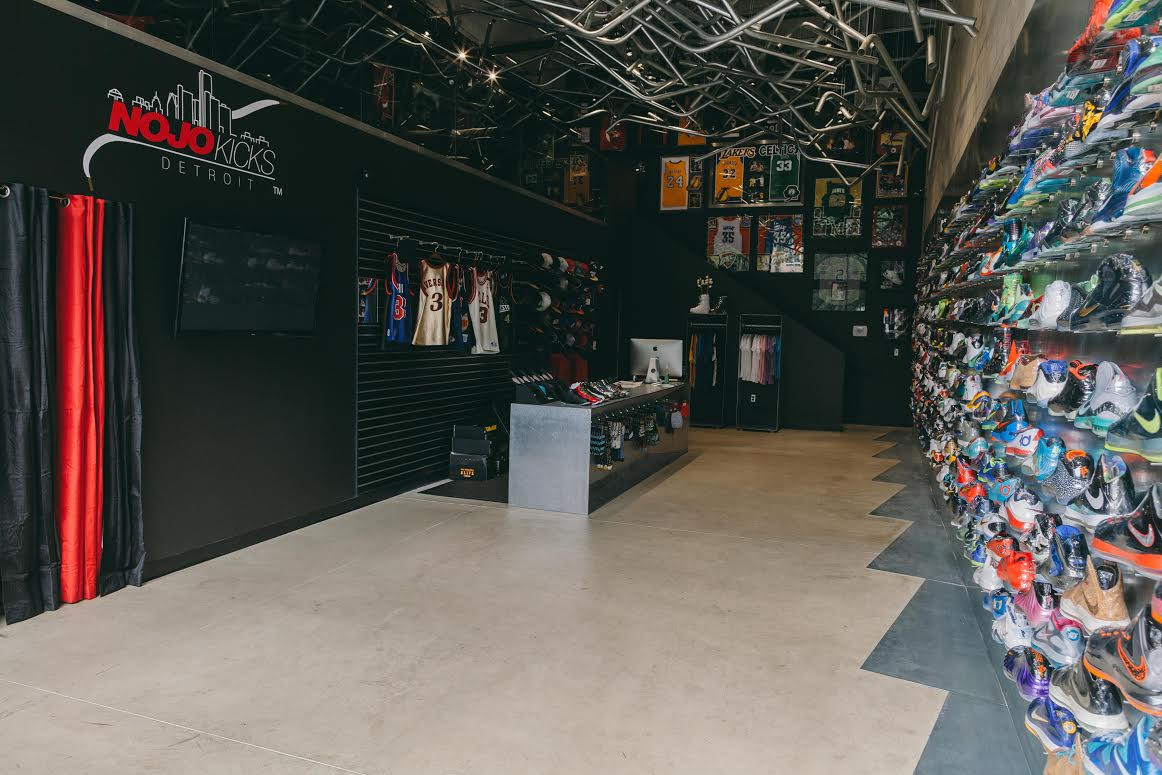 When Andy Beletskiy, Matt Caputo and Aaron Fields were opened Nojo Kicks, they had a mission: Put Detroit on the map as a sneaker destination. With a downtown location that web and operations manager Darryl Clue Blanding states “looks amazing” and boasting an impressive inventory of rare vintage and limited edition sneakers, jerseys and hats, it’s no wonder the boutique has exceeded original projections. And Blanding reports that this is just the beginning. “We’re growing. We’ve got plans for a second location that will be a more condensed version of this store,” he says. “We are on the move just like Detroit—everything here is just thriving and we’re a small piece of that big pie. For the first time in a long time this city is on the up and up and we are just happy to be a part of it.”

Who is the typical Nojo Kicks customer?
It’s a little bit of everybody. We have enthusiasts from 16-40, from the kid who loves shoes to the guy who is bringing his kid in here to reconnect with shoes.

What are your best-selling brands?
Hands down, it’s the Air Jordan 11 “Gamma.” We have had so many requests for that shoe, even though it’s been sold out. People still want it.

Which styles are the favorite?
Hi-tops. They’re versatile, you can dress them up or down. There’s also an element of seasonal guides to it—people tend to want a lower cut in the spring.

How about apparel?
The Daniel Won Collection is big for us. It’s got leather jogging pants, leather polo shirts with magnetic buttons, leather basketball shorts. The whole line is very high-end.

How has business been so far this year?
Business has been great—even better than expected. Usually January and February are slower months, people spend less, but it’s been crazy here. 2015 has kicked off to a huge start.

What keeps customers coming back?
I think it’s the consistency in our customer service. There are lots of boutiques here and they’ve got a very specific vibe. We offer a boutique look, but not a boutique feel. We want to help everybody who comes in, we treat them all the same, whether they wearing house shoes or Yeezys, all our customers are important to us. We also have what people want and our store looks amazing.

Do you have any in-store events, and, if so, what kind
We do a lot of meet and greets. Our grand opening had Fabolous in here signing autographs, Usher’s spent time in here shopping, we’ve had the whole Cavs team in here—and they buy stuff, too. They’re customers. We also have a big collab piece coming up with [Detroit artist] El Cappy. We have more collaborations coming, too.

What’s the best part of your job?
The creativity. I manage our social media, web functions and I have a hand in the creative things going on with the store. I get to be creative 24/7 and it’s awesome to see people responding to it. No day is the same.