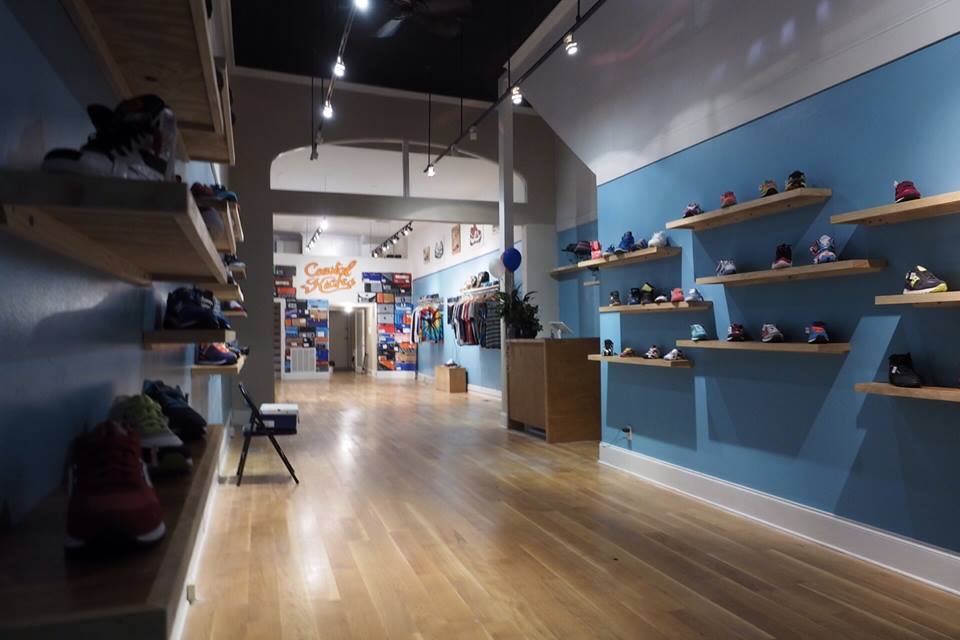 When Alan Murphy opened Coastal Kicks in 2012, he did it from a love of sneakers. “I have never worked in a shoe store,” he told Encore magazine in a July interview. “I have never worked in a clothing store or anything. I would stay up to date on shoes that were coming out and I would get what I could.” When Murphy had to drive back to his native Greensboro to pick up new styles, he decided it was time to bring a sneaker shop to Wilmington. With a swanky new location downtown that boasts a sleek look and salesfloor about three times the size of the original shop, Coastal Kicks is building up the credibility it needs to carry the highest echelon of limited edition kicks. Today, he reveals what’s hot in coastal North Carolina. What are your best-selling brands?
For the people in our area who come in to the physical store location, it tends to be either New Balance or Ewing Athletics. Now, for those who call in because they saw an item on the website or on social media—we sell a ton of Asics to them.

What are the most popular apparel or accessories?
We just got an account with Mitchell & Ness and our hats are blowing up now. We’ve got retro throwback pieces that I can’t keep on the shelves.

Do you have any in-store events?
We’ve done art shows here and a shoe convention. In the fall we will host a fashion show in the store.

What keeps customers coming in to an independent boutique?
I’d like to say it’s the quality of products and the ability to find what you can’t anywhere else. Mass retailers carry watered-down mass-produced shoes and the quality just isn’t as good. The people who come in here, they’re not necessarily going down the beaten path. And when you come into my store, we talk to you. It’s not just a hello, either—we get to know our customers and we remember them, their size, what they like. I like to think that people notice that type of touch.

What’s the best part of your job?
The other day, when I got in to the store after the Easter weekend, there was a kid waiting here in the morning. He had a Coastal Kicks shirt on and he seemed really excited. His family vacations here annually and it’s like the highlight of his trip to come in. He bought two pairs of shoes and Instagrammed them right away, bragging about them. It was awesome. [laughs] That—that’s the best part of this job.