The western boot brand shows its support for U.S. Veterans. 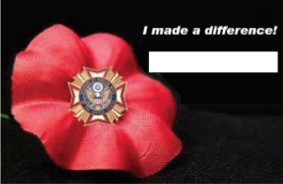 Just in time for Veterans Day, Twisted X Boots is introducing a program to raise money for those who have served our country. In conjunction with VFW (Veterans of Foreign Wars USA) the company is sponsoring the “Buddy” Poppy program during the week leading up to November 11. VFW initially launched the program— where disabled and needy veterans hand-make artificial poppy flowers as a way of earning income—in 1922 and the poppy became a symbol of the organization.

Participating retailers will receive cards detailing pictures of “Buddy” Poppies and customers will have the opportunity to sign a card for $1. Retailers can then post the cards in their shops. All donations will be given to VFW to assist with maintaining veteran rehabilitation centers and the VFW National Home for Children, a place for military and veteran families. The three retailers that raise the most money via $1 donations will receive free boots from Twisted X.

In addition to the “Buddy” Poppies, Twisted X has also launched a patriotic footwear collection connected to the VFW partnership, complete with American flag elements on both shoes and boots. Retailing for $64.99 to $189.99, the line is available for men, women and children and consumers receive a free VFW keychain upon purchase.