Continuing its ecofriendly efforts, the brand honors the anniversary with a new generation of ecoconscious shoe. 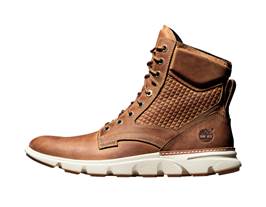 Continuing its ecofriendly efforts, Timberland is commemorating the 10th anniversary of the launch of the Original Earthkeepers with the newest generation of ecoconscious shoe: The Eagle Bay. A seasonal exclusive, the boot was released in Timberland specialty stores, select department stores and online, with a nubuck leather iteration launched this month and a mixed media one following in September.

The Original Earthkeepers was Timberland’s greenest shoe to date, with almost half of its linings and laces created from recycled PET, a third of its outsoles from recycled rubber and leather from environmentally minded tanneries. Boasting the same pedigree, the Eagle Bay also features updated styling and the SensorFlex outsole for constant comfort.

“The boot we launched 10 years ago was a catalyst for our commitment to be Earthkeepers in everything we do and to integrate sustainability across all facets of Timberland,” says Colleen Vien, Timberland’s director of sustainability. “This may be a 10-year celebration, but we’re just getting started.”