That makes two awards for Skechers running! On the heels of it GO RUN Razor 3 Hyper shoe being named Editors’ Choice by Runner’s World earlier this year, Outside magazine has named Skechers GO RUN 7 Hyper “Gear of the Year” for the road running category in its Summer 2019 Buyer’s Guide. The editors state, “Skechers hit a gold mine with its new midsole compound, called Skechers Hyper Burst.

The Skechers GO RUN 7 Hyper was wear-tested among 32 shoes spanning 16 different brands in the road running category. One tester stated: “If my slippers were running shoes, this is what they would feel like.” Another noted, “Whatever deal with the devil Skechers had to strike was worth it. This midsole has a ton of energy and zing. The Hyper Burst foam is soft to the touch but doesn’t feel mushy.”

“It’s an incredible honor that our latest generation of performance running footwear continues to be recognized,” states Michael Greenberg, president of Skechers. “After first bringing Hyper Burst cushioning to market in our award-winning Skechers GO RUN Razor 3 Hyper running shoe earlier this year, we’re excited that more runners will now get to experience it in our new Skechers GO RUN 7 Hyper.” Greenberg adds, “Year after year, we innovate the line with new insight developed through our team of elite runners like Meb and Edward Cheserek, and with Hyper Burst this shoe features one of our most groundbreaking cushioning technologies. We can’t wait for consumers to experience it for themselves on their training runs and races this summer.”

The key advancement in the Skechers GO RUN 7 Hyper is the Hyper Burst midsole, which is made using a “super critical” foaming process to create spherically-shaped cells in tight format. It’s the lightest and most resilient midsole foam that Skechers Performance has offered to date, and the unique cell structure is unlike most other EVA foams on the market.

The shoe also features pods on the outsole to boost the cushioning power to feel smooth and responsive. The breathable compression-knit upper construction helps enhance comfort, while the signature M-Strike technology helps promote a midfoot strike for natural motion and greater efficiency in every stride. A knitted collar provides a sock-like supportive fit with a lockdown lacing system to deliver additional midfoot support. 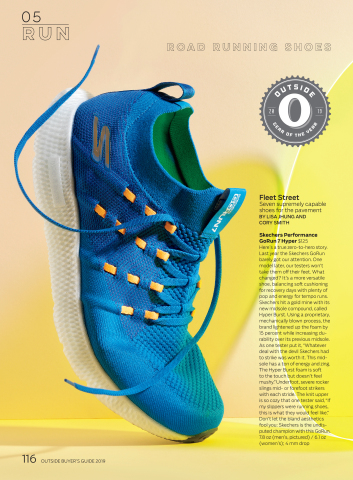