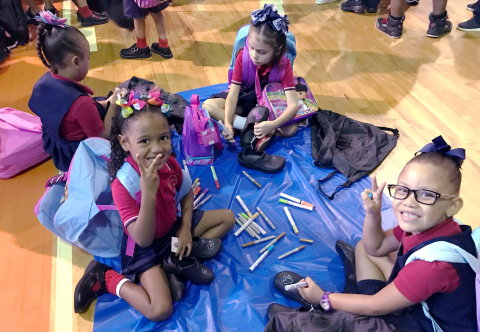 With recognition that Puerto Rico remains in need of many essentials a year after Hurricane Maria devastated the territory, Skechers has donated 15,000 pairs of new shoes to children on the island. The donation is part of the company’s BOBS from Skechers philanthropic shoe program, through which the Company has donated 15 million pairs of new shoes to children affected by poverty, homelessness and natural disasters around the globe.

“Recovery from hurricanes is not a sprint, it’s a marathon—and much work still needs to be done in Puerto Rico,” states Michael Greenberg, president of Skechers. “We saw this with power taking nearly a year to be completely restored to the island, and we’re seeing it in the families still putting their lives back together today. It’s crucial that we continue to distribute supplies to families in cities as well as more remote regions to let them know that they haven’t been forgotten. And with residents just beginning to assess the damage from Hurricane Florence, our outreach continues as we expect to be in the Carolinas in the coming months to help those impacted in that region as well.”

Skechers coordinated with charity partner Delivering Good, local organization the Carlos Beltran Foundation and Skechers retail employees on the ground to deliver shoes to approximately 1,200 children through three donation events in August and September in the San Juan and Vega Baja regions, with another 1,900 pairs to reach children at seven donation events throughout the island by the end of September. Additional events are planned through the remainder of 2018.

The territory-wide relief effort is the latest in a series of donation events that the brand has launched for hurricane victims in Puerto Rico and the U.S. In February 2018, Skechers donated 5,000 pairs of socks and 2,400 backpacks in care packages benefitting Puerto Rico’s city and remote residents. The company also partnered with Delivering Good to distribute BOBS from Skechers shoes, goods and relief to flood victims in Texas and Florida following Hurricanes Harvey and Irma in 2017.

Since the program’s inception in 2011, the BOBS from Skechers program has donated new shoes to more than 15 million kids in the United States and more than 30 countries worldwide through the Head Start programs, education foundations, homeless shelters, disaster relief and 501 (c)(3) organizations. Beyond the United States, the list of countries receiving donations in 2018 included Nicaragua, Haiti, Netherlands, Guatemala, Honduras, Jamaica, Lebanon and Jordan. San Juan students personalize their new pair of BOBS from Skechers during a donation event, providing aid to those affected by Hurricane Maria in Puerto Rico. (Photo: Business Wire)