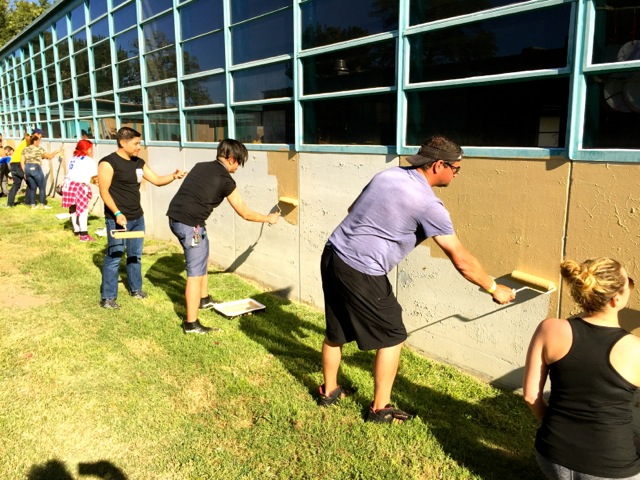 Footwear Cares continues to prove that there is power in numbers. Last week, the initiative (a month-long charity event supported by the Two Ten Footwear Foundation) held a group event in Compton, CA, bringing together volunteers from Vans, Skechers, UBM Advanstar, Lacoste, FN Platform, Lou Earl and Robert Wayne along with Two Ten president Neal Newman. Together, the group completed projects across the city that involved 15 homes, five murals, two block clean-ups, two elementary schools, one transition home, one charter school and one community garden. Under the umbrella of The Compton Initiative, homeowners, students, teachers and families all benefitted. Power in numbers, indeed. Newman, who participated in the projects, was proud of the work that was completed. “It’s amazing what happens when caring people come together,” he says. “Fifty footwear volunteers joined 1,500 local volunteers to make a difference in Compton. Roosevelt School, which serves 950 students, now has a fresh coat of paint and an optimistic future.”  The success has been so powerful that Newman hopes other industries will follow suit: “What if every industry in the U.S. followed footwear’s lead, and created their own version of Footwear Cares?” he asks. “What we’re doing is pretty powerful, and hopefully we’re setting an example for other industries to follow.”