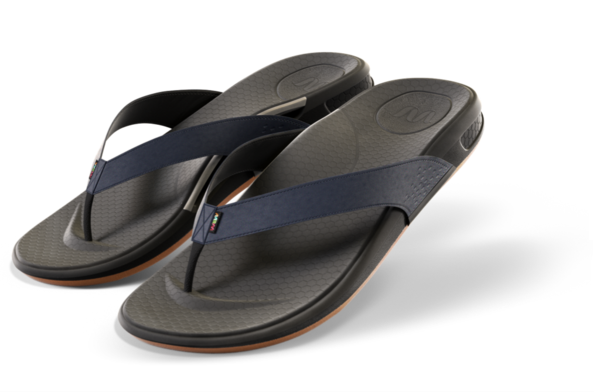 Chris Bellamy, an engineer at custom footwear company Wiivv, will run the Boston Marathon on Apr. 16 in the brand’s 3D printed flip-flops. Bellamy can think of no better illustration of the personalized fit, comfort and durability of the sandals than wearing them to compete in one of the world’s oldest annual marathons. That, and he lost a bet he made with friends. Bellamy promised to run a marathon in the Wiivv Sandals if the brand raised more than $500,000 on Kickstarter.

“When everyone said our sandal was impossible, I bet them that I’d be able to run a marathon in them,” says Bellamy, “and now I will. There is nothing more pleasing as an engineer than to put your money where your mouth is.” Or in this case, where his feet are. “We’ve reengineered every part of the traditional flip-flop to design the most comfortable, optimized sandal ever created, and I’ve had this marathon in the back of my mind through every decision we made,” Bellamy adds.

Bellamy qualified for the Boston Marathon by running his first marathon in Vancouver last year in two hours and 52 minutes, and just last weekend ran in a half marathon in the Wiivv sandals. “Our goal is to combine customization and 3D printing to create a sandal with the convenience and style of a flip-flop, but with comfort and support you can wear all day long,” he says. “Running the Boston Marathon is just an extreme example of our mission. Flip-flops aren’t really meant for running!”

Wiivv research shows that nearly 80 percent of people report foot pain, and the mass sandal market has done little to solve that issue, including the estimated $25 billion flip-flop market. “Flip-flops are the ultimate in convenient footwear, but that convenience comes at the expense of footwear that fits poorly and is bad for your body,” says Shamil Hargovan, CEO  and co-founder of Wiivv. “We decided to fix that by taking the benefits of custom to a category of mass footwear that millions of people wear everyday, and we’ve designed a sandal for your body and only your body.”

Wiivv Sandals are made for each wearer using foot measurements taken from the Wiivv app. Each foot is digitally mapped using more than 200 points to understand arch contours, foot length, width and volume, and toe spacing. Wiivv then 3D prints a custom arch for each foot, places each toe thong to fit between your toes and adjusts each strap to fit your foot. These custom-fit features, paired with the sandal’s deep contoured heel cup and triple-density foam, work in conjunction to stabilize the foot, absorb shock and promote an aligned heel strike, allowing you to move optimally from the ground up. The sandal straps are also adjustable to accommodate preference or swelling throughout the day, and can be interchanged with different strap colors.

“In our initial sandal studies, we saw that small differences of between two and four millimeters in arch height or toe thong placement significantly impact the way people move,” Hargovan says. “Imagine what mass-produced sandals are doing not only to your feet, but your whole body. Your old sandals may be comfy the first few steps you take in them, but those differences in biomechanics take a toll on your body step after step.”

Wiivv sandals will be available to the public this May for $129, with a pre-launch sign-up open for early access at wiivv.com.