Three-time NBA Champion Dwyane Wade announced today a special collaboration with rapper, entrepreneur and superstar Rick Ross on a two-shoe collection that celebrates and commemorates each of their individual success and collective impact on Miami. Wade and Ross lent their creative inspiration to design new colorways of the WOW7 performance shoe and the lifestyle-focused Essence Ace II silhouette.

The Ross and Wade collaborative colorway of the Way Of Wade 7 (also known as WOW7) is a black, purple and gold reimagining of Wade’s seventh signature shoe. The performance basketball sneaker, known for its dynamic support, comfort and breathability, features a removable/replaceable crown that wraps along the midsole and heel—a nod to the ‘Biggest Boss’ and the artwork of Ross’ critically acclaimed album, “Rather You Than Me.”

The Essence Ace II is a popular lifestyle sneaker designed for those who press for performance off the court as well. This limited-edition version has a tonal red upper utilizing premium materials, such as reptile suede, tumbled leather and reflective hits donning gold “Rick Ross” tags on each toe box, and co-branded logos throughout. The collaboration will be available on Oct. 19. Both models are produced for a limited run with the WOW7s individually numbered out of 500. The WOW7 is $300 with the Ace II $200. Both shoes will be released online at www.wayofwade.com and locally in Miami at The Edition Boutique in Miami.

Way of Wade is a collaboration between Dwyane Wade and Li-Ming and launched in 2012. Since then, Way of Wade has developed seven iterations of Wade’s high performance basketball sneakers and created a fashion and lifestyle division that has grown each year. The brand is a direct reflection of Wade’s passions and values, and includes a roster of Way of Wade athletes competing at the highest levels and hand-picked by Wade himself. 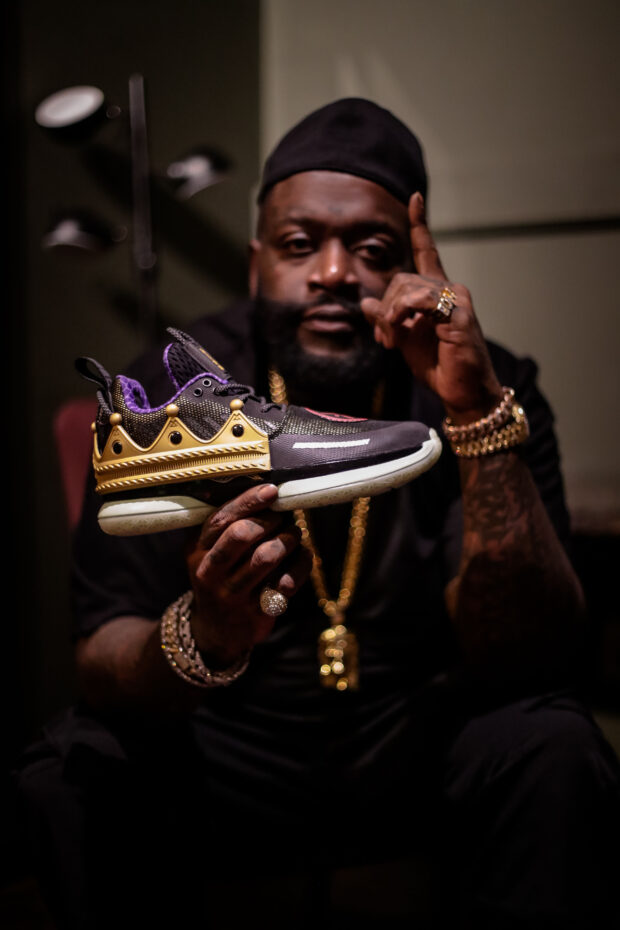