Skechers USA rang the NYSE Closing Bell June 4 to celebrate its 20th year as a public company—a milestone that marks its ascent from an up-and-coming footwear brand into one of the world’s leading athletic lifestyle footwear companies. In the years since the company’s initial public offering, Skechers’ annual sales have grown more than tenfold, from $424.6 million in 1999 to $4.64 billion in 2018—with global growth across all sectors of the brand’s direct-to-consumer and wholesale business.

“It’s wonderful to be back on the floor of the stock exchange ringing the bell for the third time—after going public and returning for our 10th year as a public company, being here again brings back many memories,” stated Michael Greenberg, president of Skechers. “We’ve had incredible milestones as a brand—from our first store in Manhattan Beach in 1995, to our first Times Square store in 1997. The year we reached our first $1 billion in annual sales in 2005, and when our international sales became more than half of our total business just a few years ago. How collections like Twinkle Toes and S-Lights have brought joy to generations of children. And how we’ve gone from Britney Spears on the cover of Forbes magazine in Skechers Energy, to a star-studded line-up of global celebrities and athletic legends telling the world about our product—including the globally popular Skechers D’Lites and Skechers GOwalk. It’s been an amazing ride for Skechers, but this is just our first 20 years as a public company, and there’s so much more to come.”

Now the #1 brand in walk, work, dress casuals and casual lifestyle footwear in the United States according to industry data, Skechers has grown from its roots as a utility boot company in 1992 to a globally recognized, award-winning, multi-billion dollar footwear brand known for comfort, quality, innovation and style. Through its history, athletes, singers and actors have all appeared in the brand’s footwear campaigns—from Britney Spears, Christina Aguilera, Matt Dillon and Robert Downey Jr. in the company’s early years, to newer ambassadors like Camila Cabello, Brooke Burke, Sugar Ray Leonard and Tony Romo, who appeared in a Skechers Super Bowl spot earlier this year—along with athletes landing on the podium including elite runner Meb Keflezighi, and elite golfers Matt Kuchar and Brooke Henderson. Recent brand milestones include the global resurgence of the company’s heritage Skechers D’Lites collection, the 3,000th retail store (opened in China) and awards for its GO RUN product, from Runner’s World’s Editors’ Choice award to Outside magazine’s “Gear of the Year” honor. 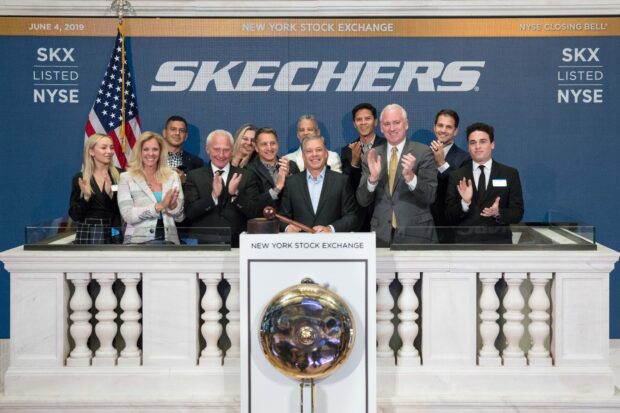