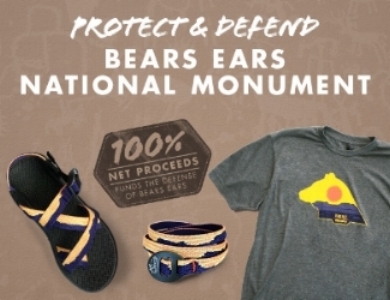 Chaco, a division of Wolverine Worldwide, has donated $47,000 to two charities (Utah Diné Bikéyah and Friends of Cedar Mesa) dedicated to protecting the Bears Ears National Monument in Utah. Earlier this year, President Trump signed an executive order directing Interior Secretary Ryan Zinke to review Bears Ears National Monument and all other monuments designated since 1996. While the administration has not made any official announcement about the Secretary’s review, sources have suggested that President Trump will attempt to shrink Bears Ears significantly.

Last spring, Chaco launched a collection of limited-edition products from which 100 percent of the proceeds would support Bears Ears. The collection included Chaco Z sandals and more. So far, sales from the collection have netted $47,000, and Chaco has split the donation evenly between the two non-profits. Diné Bikéyah is a nonprofit organization that supports indigenous communities by protecting their culturally significant, ancestral lands. Utah Diné Bikéyah was instrumental in proposing national monument designation for the Bears Ears area, which includes thousands of Native American archeological sites.

“Protection of our public lands is about our heritage and our collective future,” states Gavin Noyes, executive director of Utah Diné Bikéyah. “Thank you to Chaco and to all Americans for standing with Tribes as we defend these sacred spaces.” Noyes notes that 2.8 million Americans submitted public comments while more than 30 Native American Tribes and 98 percent of local Navajos in Utah have asked the President to leave Bears Ears alone this past year.

“Now is the time for all Americans, whether you’re a local like those of us in Bluff or a responsible recreationist like those from around the country who love Bears Ears, to stand with indigenous tribes for this internationally significant landscape,” states Josh Ewing, executive director of Friends of Cedar Mesa, a conservation-focused nonprofit working to ensure that the public lands in San Juan County are respected and protected for future generations. “This outstandingly beautifully and culturally sensitive place is far too important and too sacred to be used as a political football,” Ewing adds. “Instead, we should all be coming together to find practical solutions to solve the very real problems on the ground.”

A portion of Chaco’s donation will go towards the establishment of a new Bears Ears visitor center. The goal of the center will be to reach large numbers of monument visitors with behavior-changing information about how to visit respectfully and avoid damage to sensitive cultural and natural resources. Spearheaded by Friends of Cedar Mesa, the goal is to have a functional visitor center open in Bluff, UT, for the spring 2018 visitor season.