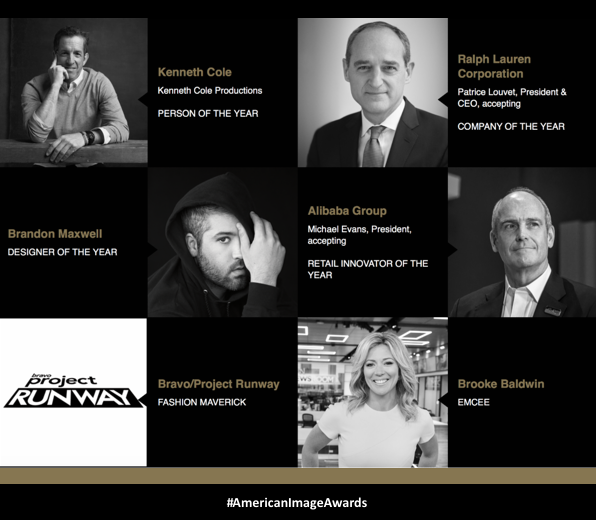 The American Apparel & Footwear Association (AAFA) revealed five individuals and companies that have exemplified leadership, excellence and outstanding achievement in the fashion industry. They will be honored at AAFA’s American Image Awards on Apr. 21, 2020, at The Plaza Hotel in New York.

The honorees include Kenneth Cole (Person of the Year); Ralph Lauren Corporation (Company of the Year); Brandon Maxwell (Designer of the Year); Alibaba Group (Retail Innovator of the Year); Bravo/Project Runway (Fashion Maverick). Emceed by Brooke Baldwin of CNN, the gala benefits the Council of Fashion Designers of America (CFDA) Foundation.

“The American Image Awards is about celebrating fashion’s future. This year’s honorees exemplify this ideology,” states Rick Helfenbein, president and CEO of AAFA. “Not only are these individuals and companies successfully delivering quality and innovative products, but they are also leading our industry across key global performance issues including environmental stewardship and social responsibility.”

Kenneth Cole is an American designer, social activist and visionary. Kenneth Cole Productions creates modern, versatile and timeless clothing, shoes and accessories. Cole is renowned for his work promoting AIDS awareness and research, including 14 years as Chairman of the Board for The Foundation for AIDS Research (amfAR). In 2016, Cole was appointed a UNAIDS International Goodwill Ambassador by United Nations Secretary General Ban Ki-moon. In 2019, Cole launched The Mental Health Coalition, a group of nonprofits, businesses, brands and celebrities focused on ending the stigma against mental illness.

Ralph Lauren Corporation is a leader in design, marketing and distribution of premium lifestyle products for more than 50 years. Throughout its history, the company has been at the forefront of the fashion industry and most recently has augmented that position with its five-year Next Great Chapter strategy. Accepting the award will be the President & CEO Patrice Louvet who joined the company in July 2017.

Playing a pivotal role in defining today’s modern, empowered woman, Brandon Maxwell’s work embodies a celebration of individuality that is leading change throughout the industry. Maxwell’s eponymous brand has been worn by many of the world’s most influential women, including Michelle Obama, Oprah Winfrey, Jane Fonda, Reese Witherspoon, Duchess Meghan Markle and Lady Gaga. In addition to his role as creative director of his brand, Maxwell is also a judge on Bravo’s Project Runway.

Founded in 1999 by Jack Ma, Alibaba originally was designed as a website to help small Chinese exporters, manufacturers and entrepreneurs sell globally. Twenty years later, Alibaba has grown into the world’s leading online and mobile commerce company, connecting nearly 700 million consumers with more than 190,000 brands and more than 10 million small businesses. Providing businesses with technology infrastructure, marketing tools, consumer insights, payments and cloud computing, the company is building the future of commerce. Accepting the award will be Michael Evans who has served as Alibaba Group president since August 2015.

Premiering in 2004, Project Runway has showcased the untethered imagination and reinvention that is the essence of the fashion industry. Having just launched its 18th season on Bravo, Project Runway both celebrates the industry and provides viewers with an inside look at upcoming designers and the profound, cultural impact of fashion. Throughout its history, many former contestants have received the American Image Award honor having risen to fame on the program, including current judges Christian Siriano and Brandon Maxwell.

Additional information on the American Image Awards, including table purchases, can be found at www.americanimageawards.org.