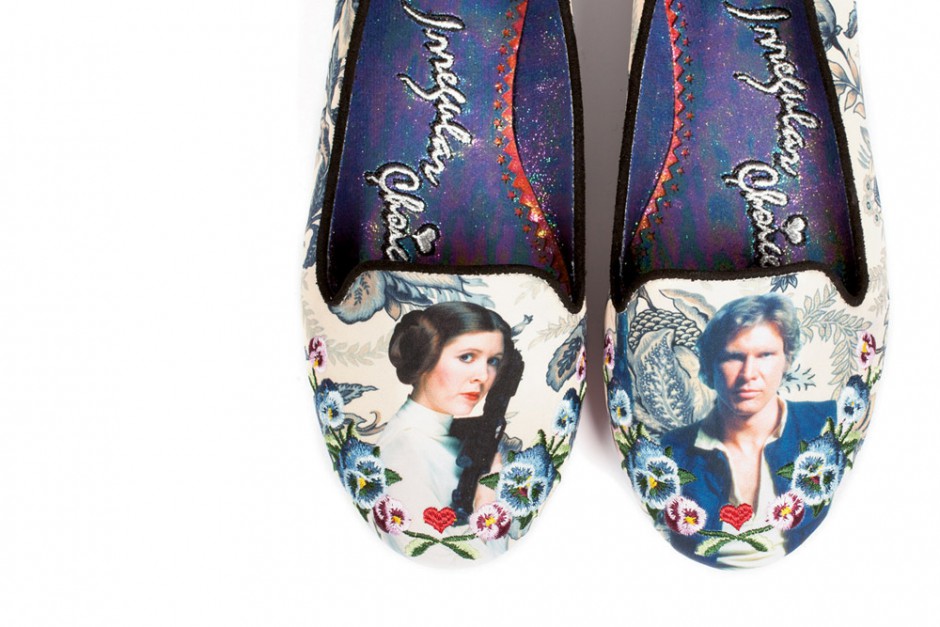 Irregular Choice’s Star Wars–themed collection is out of this world.

“One of my earliest memories was me at age 9 in a cinema with my dad watching The Empire Strikes Back,” muses Irregular Choice founder and designer Dan Sullivan. “He loved telling the story of how I was chewing gum, and every time the movie got exciting, I would chew super fast. I’ve been a big [Star Wars] fan ever since that special day.”

It’s only fitting, then, that this lifelong sci-fi fan, whose footwear designs have been equally far out and cutting edge, was tapped by Disney to create  an Irregular Choice collaboratoin for the franchise’s latest installation, The Force Awakens. After a yearlong development process, Sullivan debuted the collection last month at the brand’s London flagship to a frenzied response—some fans traveled through the night to nab a pair. “We had one lady who flew from Scotland, ran to the shop, bought her shoes and flew back straight away,” Sullivan says. Launch parties were also held in Japan, Singapore, Hong Kong and Los Angeles. The collection is available in select stores, including Hot Topic locations, Dolls Kill in San Francisco, Akira in Chicago, Aberrant Sole in Dallas and Think Geek in Orlando, as well as inside Disney parks. At press time, nine of the 14 styles—spanning pumps, boots, slippers, oxfords and platforms retailing from $160 to $420—had sold out.

Part of the appeal: Sullivan made sure to design a collection that catered to all fans, young and old, male and female. “So many people think that Star Wars is just masculine, but it has a huge female following too,” he offers. “I wanted to see what we could do with heels.” The answer: a spaceship load. Darth Vader, R2-D2 and Yoda (the designer’s favorite) all make an appearance as heel molds. Scrupulous Star Wars fans (aren’t they all?) will appreciate the meticulous attention Sullivan paid to every detail. First, the molds were the best-possible representation of every character, and details like uppers, trims and overall patterns incorporate specific movie-related images and references. For example, the Death Star ankle boots with Darth Vader/Stormtrooper heels feature black metallic leather uppers atop futuristic curved-platform soles, and the Jedi-inspired platform heels in bronze snakeskin-print leather with rope-style laces are topped off with flashing lightsaber heels. The I Know flats feature a vintage-style faded floral pattern with Han Solo and Princess Leia digital prints finished off with intricate floral embroidery. Sullivan also designed each shoe true to its episode, meaning a character from one film is not used alongside any reference not included in that movie. “This is why we couldn’t use Yoda on our outsole prints,” he explains. “We wanted that to tie the collection together, but Yoda wasn’t in every episode.” Star Wars devotees will surely appreciate such respect for authenticity. “I actually enjoyed having some boundaries and seeing how much I could push them whilst still being true to the iconic Star Wars feel,” Sullivan adds.

The Star Wars frenzy is currently in hyperspace mode—the trailer for the new film (opening Dec. 18) received more than 88 million views in the first 24 hours. Whoopi Goldberg even sported a pair of Skywalker lightsaber heels on a recent episode of The View. But fans need to grab a pair while they still can. Sullivan says the collection is extremely limited and once they are gone, that’s it. He plans, however, to continue working with Disney and is currently putting the finishing touches on a new collection in conjunction with another famous film release due out this spring.