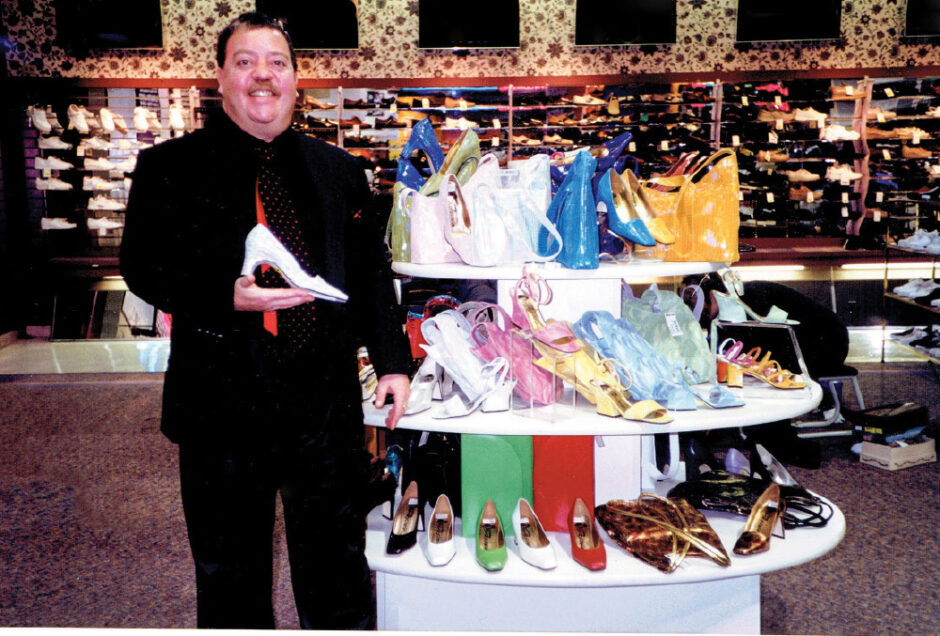 Against all odds and all comers, Mark Jubelirer, president of Reyers Shoes, on why he will never retreat.

Everything in the old steel town of Sharon, PA, seems to be shrinking. Jobs, income, businesses and population have been on steady downward trajectories since the steel mills stopped belching smoke into the surrounding skyline—a good kind of pollution that enabled locals to shop regularly and confidently. For years, Reyers grew exponentially thanks to the town’s prosperity. In fact, it grew way beyond Sharon, evolving into America’s largest shoe store (currently at 36,000 square feet) and for many years drew 1,000 busses annually filled with shoppers from as far away as Canada and Kentucky to shop an inventory that was Amazon-like back when that was just the name of the world’s largest river.

But times have changed. Reyers might still lay claim to America’s largest brick-and-mortar shoe store, but up against the endless inventory of online dealers (both retail and wholesale), the store has been forced to rely more on two other pillars of differentiation: a vast selection of hard-to-find sizes and world-class service. It’s just the latest tactic that third-generation purveyors Jubelirer and his brother, Steve, have taken in a never-ending war to keep the 133-year-old, family-owned business alive and well.

Below, Jubelirer shoots straight on a range of topics, including mortal enemies, old war stories, new strategies and rallying cries. He is one of a dwindling few great independent shoe retailing generals, holding firm in his beloved Sharon. Jubelirer’s valor serves as inspiration to all those sit-and-fits still bravely battling on.

What one word best describes your current shoe retailing philosophy? Ammunition. Independents are in a life-and-death struggle against powerful interests aligned against us on all sides. So when a customer enters your store, you need ammunition to fight the fight: desirable product in the colors and styles that will excite the customer, sizes that fit, world-class service and prices they’re willing to pay. Because it’s war. Independents like us are surrounded by Godzilla (Amazon). The beast offers free shipping, endless merchandise and prices at least as good as yours, and they’re open every minute of every day.

Is this, in fact, the retail apocalypse and Jeff Bezos is the anti-Christ? My assumption is that there will always be a form of retail, as there will always be wholesale. The landscape changes with the challenges. If a store goes out of business, it will have crossed its own event horizon and met its own particular apocalypse. Every other shoe store owner in our small town would likely have claimed that they were destroyed by the retail apocalypse named Harry Jubelirer, my father. But is Jeff Bezos the prime mover of today’s retail apocalypse? You betcha.

Your dad was a Jeff Bezos of his time? In Sharon, PA, yes. When my father bought the then 1,200-square-foot Reyers from Carl Reyer in 1952, the store carried only women’s narrows—its niche since 1886. There were six other family-owned shoe stores in the downtown area at the time, each specializing in various niches. Everyone had their own piece of the shoe pie. But Harry was raised at the knee of his father, who ran a shoe store in Pittsburgh. He was taught to embrace change and always move fast. He immediately added medium widths, and it doubled his business. He then added wides, kids’ and men’s. He also added brands that competitors carried. The fight over Florsheim was epic. The label was firmly established and exclusive in the area to a dominant and highly respected retailer who owned nine stores. But the owners of Florsheim recognized that this ambitious upstart was to be taken seriously and gave my father license to carry the brand. He stole customers from that day forward. While Harry was a great disruptor, the larger retail landscape then was stable: work hard, fill-in to quick sellers, keep windows fresh, provide good service, and everybody did relatively fine. Sure, there were skirmishes, but you could see what was coming at you. You could respond with equal force. The battlefields were level. Not so today.

Meaning? By definition, businesses that are still open have survived all previous threats. Their levels of disruption have been manageable. But make no mistake, Godzilla is newly risen and determined to breathe his fire upon you. The only way we can fight back is to show every customer who crosses our threshold that we will treat them better than Godzilla. Reyers has always stood on three legs: hard-to-find sizes, competitive prices and world-class service. Our continuing ability to provide these engenders deep loyalty among our clientele, and has for generations. Our staff is second to none, and our customers have come to know them personally. We are of, by and for our community. In this sense, we’re the same as many mom-and-pop shoe stores where a good selection, great fit and caring service, while hard to provide, are increasingly rare. To the extent that customers increasingly cannot find satisfaction in their shopping, that’s what is wrong with retail today.

Care to offer any possible solutions? Keep fighting. Each store owner is his best general. The survivors already understand what has kept them in the arena. I have nothing to teach them; I can only remain curious, listen and learn.

I say brick-and-mortar retail and you say? Tougher every day; love it anyway.

I say direct-to-consumer and you say? Those are my customers, and I say it strongly!

I say private label and you say? If an independent has the wherewithal to establish private label, I say good for them. If it’s a private label in a department store, I say it’s a con job because it’s another link in the chain of our disadvantage. Independents rarely have the buying power to establish low first cost relations with factories. We can buy some cartons, but we can’t buy a pallet.

Despite endless challenges, why are you optimistic about your business? I’m optimistic because my brother and I just met with our accountant, who said, “You’ll be okay for the next six months.” Six months will pass and, if history is any indication, she’ll say it again. Eventually, six months upon six months adds up to years and decades. Reyers is 133 years young. We’ll keep on taking it another six months at a time for as long as we can.

What are your goals for the rest of this year? Same as always and what our father preached: “Take care of the customer and everything else will take care of itself.” We firmly believe that. We just try to do it better every day.

What might Reyers look like in five years? Same as always. Our clientele see us as an institution, a known quantity and a destination where they’ll always find a superb collection of modern and exciting footwear, sizes not commonly found elsewhere and a staff who knows what to do. We’re problem solvers for our customers who have nowhere else to turn. They tell us this all the time—as they leave our store with a new pair of shoes and a smile.

What are you most proud of in terms of Reyers? We owe our ability to remain relevant in our community completely to our staff. We take our greatest pride in them.

I say Sharon, PA, and you say? The tiny town that brought us to the dance.

I say shoe salesman and you say? Everyone in our salesforce is knowledgeable about product, capable of solving customers’ problems and eager to do so every day. Yet one salesman has stood out from all the others: Larry Joltin. In a 1984 nationwide contest, he was named the “world’s best shoe salesman.” He could wait on anybody, and he would wait on everybody. He could service six customers at a time! He sold $500,000 worth of shoes annually—that’s in ’80s dollars! Larry would take bites of his lunch in the stockroom in between servicing customers. He just had a fire in his belly to be the absolute best at selling shoes. You can’t teach that. He appeared on Late Night with David Letterman and Charles Kuralt parked his massive bus in front of Reyers and interviewed him for his Sunday morning show.

As a veteran Shoe Dog, is there anything about this business that surprises you anymore? When I first came into the business full-time, after college in the mid ’70s, I tangled with a new way to market us on TV. I learned all about that. I also learned to be fluent in all aspects of our business. I spent time as a cashier. I even learned how to repair the NCR cash registers when they blew a gasket. Over the ensuing years, new speed bumps presented themselves—ones my dad never had to contend with, like credit cards, phone systems, lawyers, policy handbooks, employee health care programs, etc. It was unrelated to trimming windows, inventory management and selling shoes, but I mastered them as best as I could. Then came computers, the internet, websites and social media. While I have yet to learn how to ring up a sale on these new-fangled cash registers, much less fix one, I rely on my co-workers for that. Likewise, I rely on my co-workers to know the benefits and consequences of social media and about the latest software and phone systems. I’m reminded daily of my ignorance on these matters, and I’m no longer surprised by how dumb I am. Yet I take solace that some aspects of our beloved sit-and-fit business will never change and that I can still sell a mean pair of shoes.