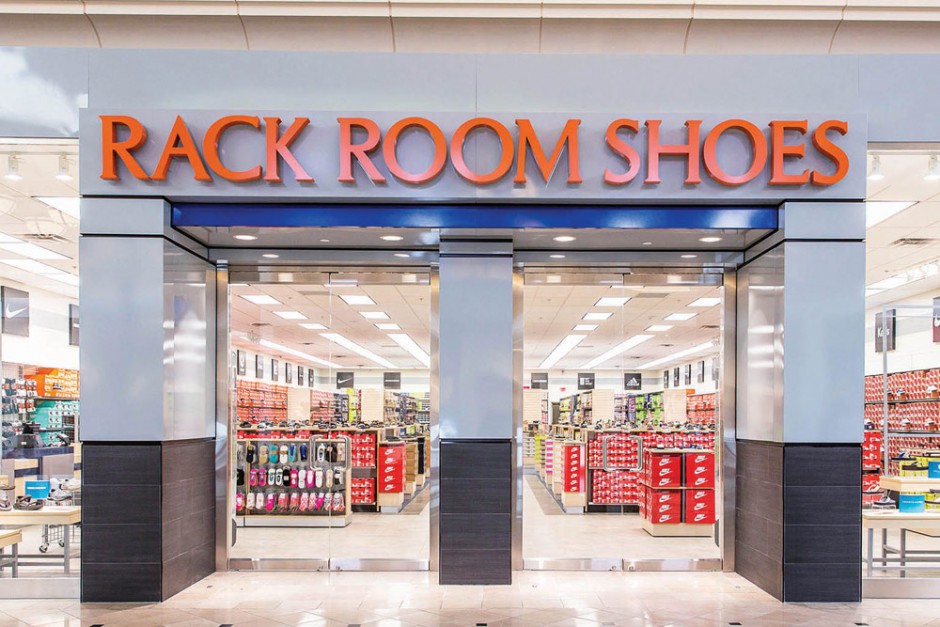 Norm to the Core Mark Lardie knows the shoe business. In particular, he knows the businesses he has led on a steady growth path the past four years—Rack Room Shoes and Off Broadway Shoe Warehouse chains in Charlotte, NC, a division of Germany-based shoe retailing conglomerate The Deichmann Group. Rack Room Shoes is currently at 420 locations and the more discount-oriented Off Broadway Shoe Warehouse stands at 80 stores. As CEO, Lardie understands exactly what the two successful family footwear chains represent in the marketplace. He knows who they are trying to reach, how they are going about it (both in-store and online) and why it doesn’t require a lot of hyperbole.

Neither chain proclaims to offer the latest or trendiest styles. Nor are they vying to be the biggest, coolest, lowest- or highest-priced retailers in the land. That’s just not what they’re about, and that’s okay, says Lardie. He believes there’s ample potential for success now and in the future by zeroing in on a value-priced, trend-right selection aimed at Middle America’s Millennial-age moms shopping for themselves and their families.

“What we do isn’t the sexiest thing in the industry, and it’s not the most modern, but it’s core,” Lardie says, but in today’s challenging economy, it’s something the target customer appreciates, needs and depends on. “She’s going to the place that’s important to her core values,” he adds. Those values center on family footwear retailing basics: shopping efficiency, value pricing, name brands and a trend-right selection as well as trust and consistency. “We’re a trend-right place but not a trendy place,” Lardie explains. “We want to make sure moms who come into our stores feel comfortable, see the appropriate fashions for them and their families for the season and get out quick.”

Take, for example, the recent introduction of The Athletic Shop into Rack Room stores and online. The shop-in-shop concept is designed to appeal to its target female customer by being her “athletic authority.” But, Lardie notes, that has nothing to do with trying to be the hippest sneaker boutique or the most intense specialty running shop. “Our customer might not be comfortable going into those types of athletic specialty stores,” he explains. “But for our Millennial moms, we offer a great selection that’s easy to shop. It’s not intimidating, and the dedicated space allows us, along with the digital assets, to remind them on a weekly basis of that.” Lardie adds that the space includes added displays for brand partners to tell their athletic stories better. “We’ve improved the experience and made a bolder statement that [moms] see right away,” he says. The changes have enabled the chain to segment its fashion categories in a more robust way as well. “Now we can do both—we can be a mom’s fashion authority with our curated collection of non-athletic shoes and tell an equally powerful athletic story.”

Rack Room’s merchandise philosophy is defined as a curated assortment, which Lardie says is one of the chain’s three business cornerstones. “Our merchandise team works really hard at curating styles so that when our customer comes in or logs onto our site, she’s able to understand quickly what is relevant and that it’s been tested in the marketplace,” he says. Think market leaders such as Nike, Rockport, Skechers, Nine West and Steve Madden across women’s, men’s and kid’s categories. It’s a one-stop family shopping destination that houses 100-plus brands.

The second cornerstone of Rack Room’s business model involves the voice of the brand. Specifically, it’s a consistent, comfortable voice that’s relatable to its core customer. “The words are real. We don’t play a lot of games,” Lardie offers. “We don’t use a lot of hyperbole like ‘the greatest sale of the season’ or ‘the lowest prices anywhere.’” The chain uses a similarly low-key approach in its visual messaging. For example, Rack Room features aspirational models—actual customers who win contests held regularly—for its in-store images. (Winners are flown to the company’s headquarters, where they are given the full-on model treatment.) The point is that they are “real” people. “Everything we do is designed to be something that our customer can relate to,” Lardie says, adding, “We believe that, over time, these words and images have helped create a trusted voice for our brand.”

The third cornerstone—the one that Lardie believes anchors it all—is ensuring that whenever a customer comes in to any of its stores or logs onto its site they are delighted and surprised by the experience. “We want to exceed the customer’s expectations,” he says, noting that she doesn’t need to be blown away because she isn’t expecting to be. “We’re an assisted service, moderate footwear brand,” he notes. “We want to make sure we meet her on those expectations.”

That expectation starts with a greeting—always. “It seems so simple, but in that environment she’s not expecting it,” Lardie offers. “She thinks she’s going to have to wander around and help herself.”

That’s not the case at Rack Room, where each store is staffed to offer a service element involving a solution-based approach. For example, if a style is not available in a particular size, the sales assistant will have the correct size shipped to the customer’s home at no charge. Lardie says the overall goal is to change a service group into a sales group. “These moms are pressed for time,” he notes. “In everything we do, we don’t want to delay her getting through the store and completing her purchase. We want to guide her progress as efficiently as possible. We want to make sure her kids aren’t lost and she is able to find what she needs quickly and easily and check out in the same manner.”

Similar efficiencies apply to the website. It’s about quick explanations and seamless navigation. “We’ve modernized and migrated heavily into the digital space over the past four years, but the voice of our brand online is in the same simple tone that she can trust and relate to. We think that’s been critical to our success,” Lardie says.

As everyone knows, success at retail is relative these days. In an era when flat is the new up, just staying in business is a victory for many stores. The fact that several industry titans have gone down for the count recently while others are closing doors is having a ripple effect. “We rely on symbiotic relationships. We can’t solely drive a strip center’s traffic, so when Target isn’t opening stores or Walmart is closing outlets, it concerns us,” Lardie offers. The same goes for malls: “We can’t carry them. We have to have a healthy retail group to help us with traffic,” he says.

On the other hand, Lardie says weak stores help no one, and this shakeout has been a long time coming. The recession exposed the fragility of many businesses, and those that failed to reorganize and reposition during the ensuing (albeit anemic) recovery are paying a price for it now as consumers pull back again. Nonetheless, Lardie says the struggles of fellow retailers—even direct competitors—are tough to witness. “We’re a close group and I don’t wish anyone ill,” he says. “By the time Aéropostale, PacSun and Sports Authority close, there are going to be a lot of good people out of jobs.”

Fortunately, Rack Room Shoes and Off Broadway Shoe Warehouse are weathering the storm. While the growth at Rack Room has fallen off the high single-digit increases it garnered during the post recession when consumers refilled their closets, Lardie reports that the group’s sales were positive in 2015, and he expects a positive comp for this year as well. “They’re not the most exciting numbers, but they are consistent,” he confirms.

In fact, Rack Room and Off Broadway are in expansion modes. Lardie believes there’s plenty of opportunity to open more stores. “We’re still a relatively small player in the country,” he says, noting that the company hopes to maintain a six to seven percent annual storefront growth for the foreseeable future. “We have great concentration in South Carolina, Florida and Texas, but we only have a half dozen locations in California. We have plenty of opportunities to expand in locations where Millennial moms live.”

Lardie is a firm believer in brick-and-mortar retailing. He sees it as an advantage because, for starters, one of the best ways to compete against Amazon is to avoid trying to copy them. “We need to take advantage of things they don’t do,” he offers. “We have 500 locations where people can experience our brands. It makes sense for us to expand our trusted brands further coupled with an omnichannel approach.” Lardie believes that omnichannel is the place to win at retail today—“not the guy who puts his head in the sand and doesn’t play in the digital space or the guy who only wants to play online.”

When asked where he envisions the company in five years, Lardie speaks in modest growth terms. “We work really hard at not trying to change too many things too fast,” he says. “We move methodically and test thoroughly. Don’t expect any sharp left or right turns. We’re comfortable and we like what we’re doing.”

For those seeking specifics, Lardie projects another 150 store openings between the two chains over the next five years—just not in markets already saturated with established family footwear competitors. Chicago is one such example. “We have great competitors that have a strong presence there,” he confirms. “We don’t need a third player there, but there are plenty of areas in the rest of America that could use our brands.”

The plan is to “carefully” expand both chains, which is a fitting description for a company that avoids using hyperbole. It’s also a breath of fresh air in an often over-hyped retail world. “We think our continued honesty, everyday fair value and not messing with hyberbole is how our customer gains trust in us,” Lardie explains. “We’re not the place where she has to worry about whether her coupon will work if it’s Wednesday, or whether Polo is excluded… We believe that she overcomes those concerns because she knows, every day, she’ll find fair value in our stores.”

That’s the family footwear retail concept in a nutshell. Lardie believes knowing and accepting that is half the battle. “There are plenty of people running family footwear stores. They just don’t want to tell you that they’re doing it,” he says. At, Rack Room Shoes and Off Broadway Shoe Warehouse, the opposite is true. •