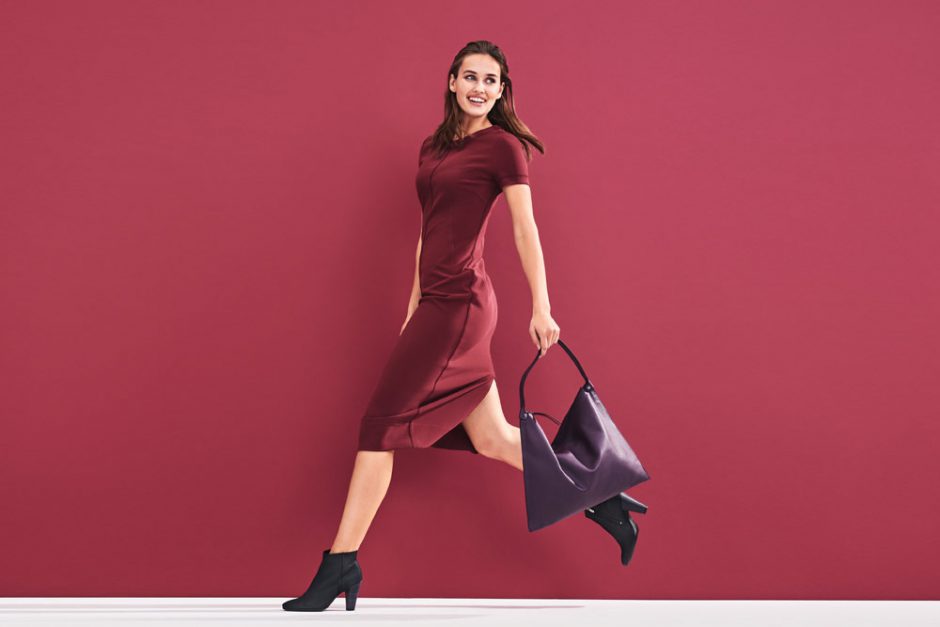 Ecco marks its silver anniversary in the States, a legacy built on design innovation, premium quality and supreme comfort.

The year was 1991. The Gulf War ended, Nirvana kicked off the grunge movement with its groundbreaking Nevermind album and Danish shoemaker Ecco ventured into the U.S. market. Back then, Dave Quel was a manager for Track ’n Trail, a family-owned chain of shoe stores based near Sacramento, CA, that was among the first to give the brand a chance.

“I have a vivid memory of the day we unpacked the first Ecco shoes,” recalls Quel, now president of Ecco USA. “They came in metal boxes. I said, ‘What in the world is this? Shoes in a can?’ It was different from anything we’d seen until that point. I took a pair out and tried them on, and was immediately blown away by the comfort. I instantly got what they were about. Shortly after, the Ecco team came to our store, explained what makes an Ecco shoe so special and made evangelists of us all in terms of selling Ecco. And 25 years later that’s still the formula we use.”

It’s a winning formula by anyone’s standards. Ecco is now carried by leading U.S. retailers from coast to coast and has been worn everywhere from pro golf’s fabled Masters Tournament to the heartland’s iconic Mall of America, where the brand operates a flagship.

But as countless other newcomers to America have found, success and acceptance weren’t instantaneous. Back then, Euro comfort wasn’t yet a buzzword, much less the massive category it is today. American shoppers weren’t used to European sizing, and Ecco’s prices (around $150) were considerably higher than other casual shoes of the day. Still, Ecco founder Karl Toosbuy had long dreamed of becoming a player in the U.S. market—and the time felt right to introduce Americans to the brand’s Scandinavian craftsmanship and aesthetics.

“He loved America, with its vast and differentiated retail landscape,” says Quel, who worked with Toosbuy for a number of years after joining Ecco in 1999 as a territory manager. (Quel steadily worked his way through the ranks of national sales manager, vice president of sales and COO before being named president of Ecco USA in 2010.) “He thought, ‘If Ecco can make it in the U.S., we’ve made it as a brand.’”

“Right from the start, they worked hard to be a great partner,” remembers Peter Hanig, owner of Hanig’s Footwear in Chicago, another pioneer when it came to stocking Ecco. “Not only is the quality, the comfort and the styling strong, but they really helped us to develop the brand in the Chicago market and make it profitable for us in terms of things like inventory returns.”

From the beginning, Ecco execs realized that they couldn’t force the European business model on the U.S., says Quel. They would have to adapt to gain a place in the market. Give Ecco real credit here as many other brands—to this day even—try to pound their business model into this market, believing it’s the U.S. and not them that’s the problem. Ecco understood, from the very beginning, the art of assimilating, and it’s paid off handsomely. “In the U.S., there’s more of a partnership between brands and retailers,” Quel observes. “The retailer partners with the brand. They take risks, promote the brand and validate it. In turn, the brand works to support the retailer with hands-on service, quality and value, and weekly replenishment stock. In Europe even today, retailers buy nearly all their needs at the beginning of a season, the wholesaler delivers it, then they see each other again in six months.”

Toosbuy was careful to position Ecco as a premium, high-quality Scandinavian brand at the outset, focusing on select independents and premium department stores—a distribution strategy that hasn’t changed much over the past 25 years, says Greg Marchini, U.S. vice president of sales.

Ecco also provided its first American retail partners with training that would turn those on the sales floor into brand ambassadors. They educated them about the Ecco story: The brand is one of a handful of shoemakers that owns its process from start to finish, maintaining its own tanneries, factories and staff designers. It values environmental, corporate and social responsibility in every step of the process. It doesn’t strive to be the biggest shoe company in the world, just the best. To get that message across in the U.S., Ecco reps offered retail clinics where they taught store associates about the shoes’ unique features and leathers. They even brought a “walk machine” into stores that analyzed people’s feet and highlighted hot spots on the shoes they were wearing, then showed how Ecco shoes would improve their comfort level by better distributing their weight. “It was truly magical. You would go through one of the clinics and become a believer,” recalls Quel. “When the people on the sales floor feel that passion for your brand, it gets passed on to the consumer.”

Within a few years, Ecco had built a loyal fan base among American men. The brand sold a million pairs of shoes in the U.S. for the first time in 1997 and successfully added men’s dress shoes to its casual offerings. American women, however, proved a more elusive quarry.

“It took us a while to learn that from region to region, country to country, male customers are more similar than they are different, but female consumers have different tastes in different markets,” Quel explains. “What’s helped us make a breakthrough in the last five years is recognizing these differences.” To get a better handle on the idiosyncrasies of women’s style preferences from place to place, Ecco is building design and branding infrastructure in each of the markets where it does business. “We now have product people in the U.S. helping us translate the needs of the market back to our design team in Denmark,” Quel says, adding that the approach is helping Ecco to make steady progress among female fans.

Winning over women shoppers is far from the only breakthrough the Scandinavian shoemaker has enjoyed during its 25 years of doing business in the U.S. One milestone occurred unexpectedly in 2010 when pro golfer Fred Couples showed up for the Masters Tournament in Augusta, GA, wearing Ecco golf shoes—sans socks, no less. The brand had introduced its first golf line in 1996, after Toosbuy played a round with CEO Dieter Kasprzak wearing another brand’s shoes and decided Ecco could do better. Couples had a strong round in the tournament and, as a result, got a lot of televised airtime. By Monday after the tournament finished, Ecco was on the map among golfers. “Our phones rang off the hook,” Quel remembers. “We were completely unprepared for the explosion that happened after he wore those shoes.” Today the brand is the world’s fourth largest maker of golf shoes.

Building on the success of its golf shoes, Ecco introduced performance shoes suitable for training, running and walking, steadily expanding its customer base. As it did, Nordstrom expanded the number of Ecco styles it carried, notes Robert Evans, the department store chain’s vice president and DMM of men’s shoes and kids’ shoes. In many ways, the steady growth in fans among Nordstrom’s customers mirrors the growth in acceptance and popularity of Ecco in the U.S.

“We started by selling a few Ecco walking shoe styles in the early ’90s,” Evans remembers. “Customers liked them because they not only looked good but they felt great. Ecco makes very comfortable shoes in understandable styles, and the brand has been fast to move the customer forward and evolve their shoes. We added dress shoes, Euro sneakers, boots, outdoor and golf.” Evans adds, “Ecco is a great marketing partner because they provide our stores with a dedicated merchandising and training team and they stock core shoes for us to reorder so we can keep them in stock.”

Such compliments are a point of pride for the Ecco team, and nurturing its retail partnerships remains a top priority. “A lot of premium retailers in the U.S. gave Ecco a chance, and for that, we will always be indebted,” says Quel. “We’re a meaningful part of all these great independents, like Hanig’s, The Tannery in Boston, Tip Top Shoes and Harry’s in New York, Little’s in Pittsburgh, Ria’s in San Francisco and The Walk Shop in Berkeley, CA. We’re also a relevant brand to premium department stores like Nordstrom and Dillard’s, and that’s important to us.”

These days, Ecco no longer uses catchphrases like Euro comfort. The brand doesn’t have to. People know who Ecco is and what it stands for. “Comfort is just in our DNA,” says Quel. “It’s baked into who we are. A women’s pump may not be as comfortable as a women’s casual shoe, but a women’s pump from Ecco is going to be the most comfortable one she can put her foot into.”

Speaking of pumps, Ecco’s sights for the future are set firmly on growing the female side of its U.S. business with the launch of a new collection of styled, heeled footwear this fall called Shape. The collection incorporates Ecco’s hallmark direct-injection process (DIP) that negates the need of glue or stitching and fits the contours of the foot beautifully. “It’s our most streamlined, feminine heel construction to date,” notes Marchini.

“In addition to the tremendous women’s growth potential in the U.S., we see significant potential in the sport lifestyle and outdoor lifestyle categories,” Marchini adds. In outdoor/sport, Ecco is launching the second generation of Gore-Tex Surround with Biom Venture and Ecco Cool 2.0 styles for Spring ’17. Meanwhile in golf, the brand is incorporating Gore-Tex Surround, Spydr-Grip soles and BOA enclosures to various Cage, Biom and Cool products.

Looking to the future, Ecco is investing in learning more about its consumers through research and face-to-face interactions at its own retail shops. In fact, the growth of these owned and operated shops, albeit modest, has been among the biggest changes in Ecco’s distribution strategy during its quarter century in the U.S., says Marchini. “In 2016 and beyond, we’re creating a healthy, balanced portfolio of distribution points that allows consumers access to all of our product categories (women’s, men’s, sport, golf and leather accessories) as well as making shopping experiences seamless between the offline and online world.”

The goal, according to Quel and Marchini, is to get to know their fan base better so Ecco can not only design products that resonate with shoppers, but also engage them in a more personal manner and ultimately provide the kind of meaningful shopping experiences that build loyalty. Beyond that, “our positioning as a premium, high-quality brand driven by Danish design principles will not change,” Quel promises. “We will continue to be a super-premium brand that consumers respond to and a profitable brand for our retail partners.”

No matter what trials and triumphs lie ahead, Ecco will always strive to meet the high standards set by its founding father, Quel assures. And if Toosbuy were here to celebrate his brand’s silver anniversary in the U.S., would he be pleased with his team’s progress? Quel chuckles, “He’d say, ‘It’s good so far…but you can do better.’ And we will.”