The minimalist running category is red hot with emerging brands, fresh designs and new claims related to the concept’s approach to the age-old exercise of running. The latest market analysis and Spring ’12 products are sure to keep the buzz going.

Ecco will extend its Biom collection by adding a trail version, a super minimalistic shoe called BioLight, and more everyday styles with everything from lace-ups to slip-ons and zip-ups. 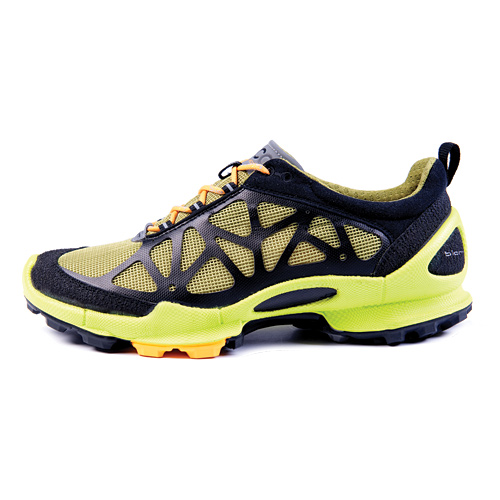 When asked what was new for Spring '12, Somnio founder Sean Sullivan coyly answered, "That's the interesting part about this category--features in a shoe that has almost no construction?" Fair enough. Somnio will continue with the super light Nada, which weighs in at 3.5 ounces, and its 14-minute instructional DVD that helps the customer with flexibility, range of motion and the body's transition into minimalist shoes. 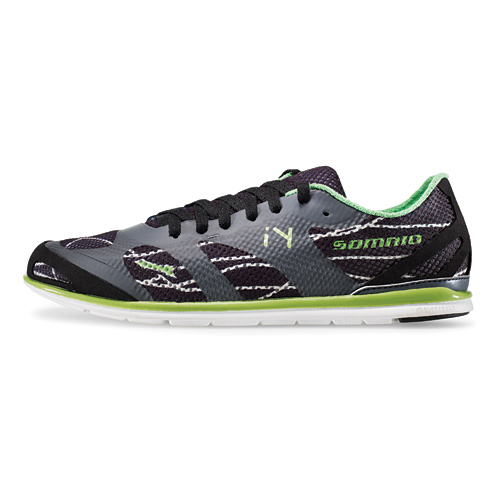 The NB Minimus Zero collection reaches new highs (or lows, rather) in minimalist construction via a zero-drop last and an even further reduction in weight and stack heights. Katherine Petrecca, strategic business manager, says the collection offers a level of performance "runnability" that consumers can't find in most minimalist shoes. 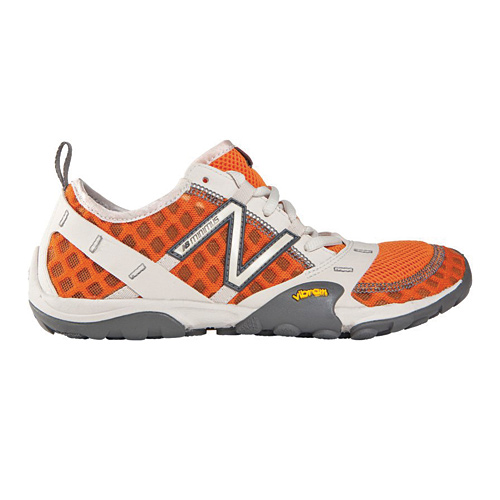 The Road Glove (men's) and Dash Glove (women's) have zero mm ball-to-heel drop and 4mm of compressed EVA midsole cushioning. Consumers requested more road running-specific products for Spring '12, Hammond says. For a more plush impact, Merrell will debut the Bare Access collection for Spring '12. It's a grouping with 8 mm of cushion that still allows for a zero mm drop. In addition, a new Barefoot Water collection with six styles also enters, as well as two new casual styles as part of the brand's Barefoot Life collection. 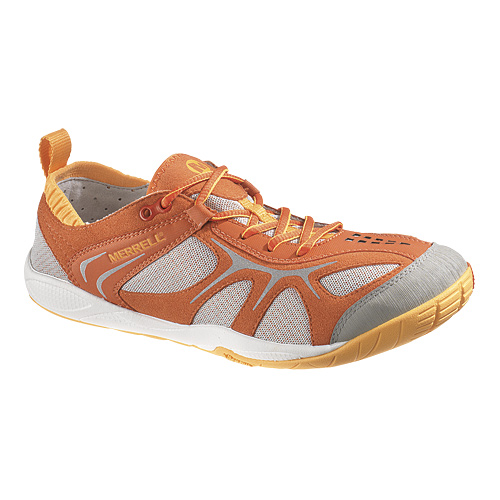 CEO Tony Post was tight-lipped about FiveFingers' Spring '12 collection as a slew of counterfeiters have jumped on to the brand's signature construction. He did reveal that the company will extend its position in the running and fitness markets, the latter he considers an emerging market. It's also one of the reasons Post sees the category sticking around. "It aligns with passions people have, no matter what their fitness passion is," he says. "People get used to that sensation. If they go too many days without it, their bodies crave it. The body looks for that feedback." 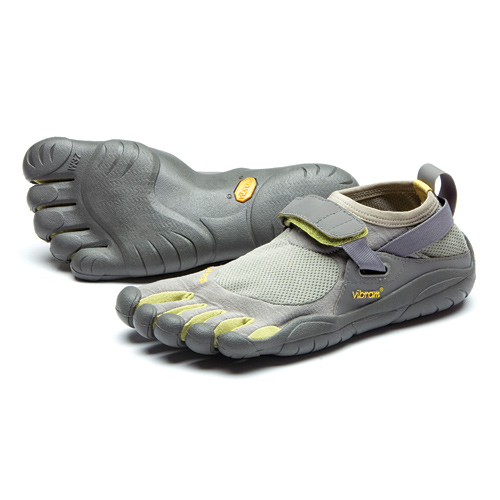 Keeping with the promise of "delivering more with less," Brooks will release PureProject, a collection of four shoes--the Pure-Connect, PureFlow, PureCadence and PureGrit--each with its own purpose. Caprara explains that the company infused the collection with five technologies that actively promote the wearer's bio-mechanical alignment, and each style has its own purpose. Pure-Connect puts as little as necessary between the runner and the road; PureFlow is for the customer who doesn't want to lose cushioning entirely; PureCadence supports; and PureGrit is the company's newest in trail running. 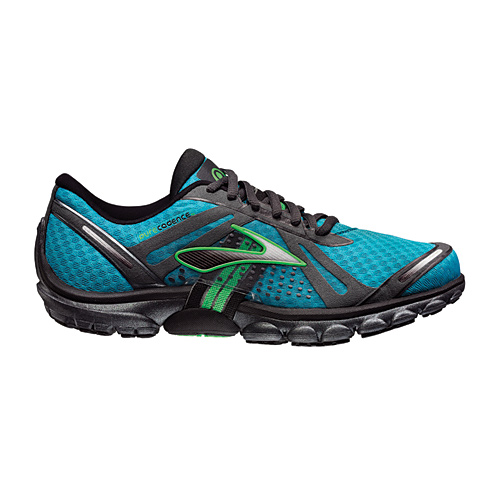 The Mirage 2 is a light trainer designed for over-pronators. A good choice for first-time, transitioning minimalist runners, the Mirage 2 has a mid-foot support bridge that supplies a hint of guidance. The 4mm toe-drop is cushioned with Heel ProGrid Lite for a low impact stride, and O'Malley says, "This is for someone who wants to explore but has a lot of movement or overpronation. It has a little bit more support." Saucony will also continue to offer the Hattori, the most minimalistic shoe in its line, weighing in at 4.4 and 3.8 ounces for men and women, respectively. 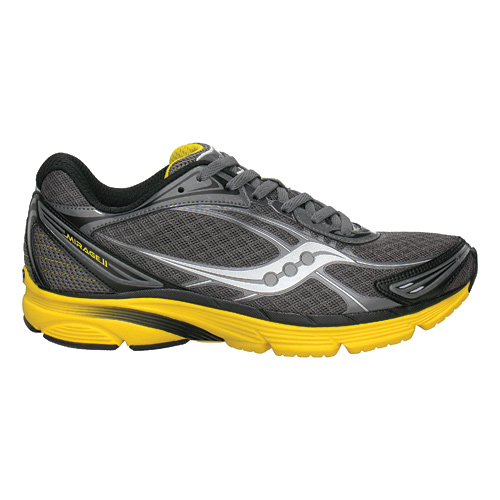 Like the ever-present technology in our daily lives—tablet computers, smart phones, teeny speakers, i-this and i-that—the athletic market has long been a steady source of techy gadgets designed to enhance our lives. Whether it’s to prevent injuries, run faster or jump higher—all subject to debate as to their validity, of course— athletic footwear continues to be a long-running source of consumer curiosity and, more importantly, a multi-billion dollar annual revenue stream.

Let’s face it: It’s not like there’s been anything much better for people to run, jump or walk in—unless you are of the belief the human foot is actually the ideal “shoe” for exercise, and what footwear retailer would admit that? But if going completely naked is not your cup of tea, then the industry’s latest technical revolution of mimicking the natural motion of barefoot running and walking via a minimalist shoe construction might be for you. Legions of hard-core runners, the wellness obsessed and the fashion-following masses are buying into the concept. Sales have been through the roof for category leader Vibram FiveFingers for several seasons, and traditional running brands like Brooks, New Balance and Saucony, as well as outdoor leader Merrell and its popular Barefoot offshoot, have entered the fray with their respective spins on minimalist shoes. The category has also spawned new brands, such as Somnio, Vivo Barefoot and Newton Running, which has reportedly received a $20 million investment from Reebok founder Paul Fireman. All these players are bullish about their current sales as well as future prospects. In fact, Merrell’s Barefoot Collection helped fuel a record first quarter for parent company Wolverine World Wide and it now ranks as one of the conglomerate’s most successful product launches in its history. In fact, some industry analysts say Merrell’s launch could have $100 million in annual sales potential.

Experts say the minimalist running shoe craze has been ushered in on the heels of an overall wellness movement that encompasses the mind, body and soul. For this consumer, less is more pretty much across the board and to be well is just as important as to be wealthy. “There’s a larger trend toward minimalism outside running,” says Meg Hammond, Merrell’s marketing manager. “We see people only buying food near where they live, downsizing their homes. More people are trying to get more out of what they do and what they have. Barefoot running fits into that.”

Ironically, some have labeled minimalist footwear as “anti bells and whistles,” but one could just as easily argue that it is the latest in a long line of revolutionary technologies spawned by athletic footwear companies. The main premise of footwear designed to help you become fitter is the same, just that the construction and how you are supposed to run in them (forefoot strike first, not heel-to-toe) are 180-degree polar opposites. Nevertheless, retailers across the country confirm that sales are on the upswing and they only expect the pace to pick up in the coming seasons. “Our sales are up 20 percent over what we sold at the end of last year,” says Dave Borodzik, owner of Runner’s Roost in Orchard Park, NY. A shoe veteran of 32 years, Borodzik is a bit surprised with the surge in minimalist popularity. “We’re buying for next spring, and the manufacturers are pumping out minimalist shoes like crazy. Every company is on board.” Sales are “definitely up” as well at Maine Running Company in Brunswick, ME. Brandi Helstrom, part-time manager, says when Vibram FiveFingers first came out a few seasons back, the store was selling them like hot cakes. “Now, people are becoming more aware that becoming totally barefoot might not be realistic, so they’ll opt for a light flat,” he says, adding that minimalist category appears to have legs for the long run. “At first, a lot of people said it was going to be a fad, but now a lot of companies are starting to switch over. They’re changing the dynamics of their traditional designs to make them more lightweight overall, or they’re incorporating a separate minimal shoe.”

Does this mean the traditional running shoe will go the way of the dinosaur? Doubtful, most experts agree. Plenty of people still prefer the cushioning those shoes offer, and many running gurus still recommend that type of shoe. For many, it’s just better to stick with what has worked rather than experiment and cause a potential injury. Others say, why not both? A combination of the two constructions is a way to blend one’s running regimen. Retailers and brands often repeat the same message: Minimalist shoes are supplemental tools rather than the main event for most runners. “People are not so much converting but adding,” confirms Dan Legor, senior product manager for Ecco, makers of the BIOM natural motion running collection. “These shoes help improve their existing program.” Legor advises, “You don’t go from your existing running shoes straight into minimalist. There’s a transition period.” Merrell’s Hammond noticed the same: “Some do a day a week, some do a couple miles and then switch back to traditional running shoes. We’re encouraging people to find out what works for them.”

While the category continues to evolve and grow from its original crop of triathletes and early adopters, Brooks’ product line manager Carson Caprara hesitates to name a particular age group or demographic as more likely to buy minimalist shoes. “It’s unique in that it’s being driven by both new and experienced runners,” Caprara says. “Young and old, men and women.” He notes that the common thread is a consumer looking to run in a new way—the more adventurous and experimental runners in the pack who are willing to try new things. For retailers pounding the sales floor day in and day out, a more defined customer picture is forming. “It’s more the adult runner,” says Borodzik. “Men and women, ages 30 to 50. It’s definitely not the high school kid. The minimalist customer is the end user rather than the guy who wants a fashion shoe.”

These traits that define minimalist running customers are a stark contrast from the shaping and toning customer—the difference being that minimalist shoes are seen not just a means to an end or a quick diet fix. “These people are not looking for a magic pill or potion to make them fit,” says Patrick O’Malley, senior vice president of global product for Saucony. “They want to work out and are looking for footwear that will allow them to do the activity they love.” It’s a lifestyle choice more than a remedy and, therefore, is another reason experts believe the category will continue to grow.

“You can see by the number of brands that the movement is definitely something the industry is supporting more holistically,” says Legor. “Everyone has a specific approach. It’s becoming a category, not just an offshoot.” Legor adds, “Two years ago the question was, ‘Is this a trend?’ Now it’s clear that it’s that next category and it’s a matter of how each brand interprets it.” —Meagan Walker