My daughter, Darby, makes her Footwear Plus modeling debut in Aug. 2004. 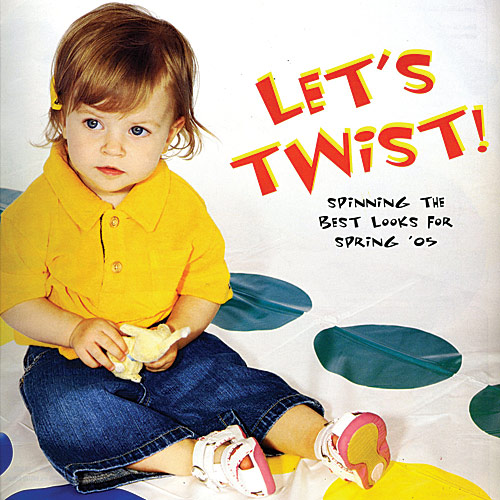 Footwear Plus was born in a recession and a time of war in the Middle East. The magazine’s first batch of issues, which appeared in late 1990, contained plenty of doom-and-gloom articles concerning an economic downturn “unlike any in recent memory, with no end in sight” and increasing alarm over how a protracted war in Iraq (boy, did history prove that to be a premature assessment) might scare the American consumer shopless. Combing through those issues in preparation for this, our 20th anniversary edition, I took some comfort in the fact that we were able to crawl out of that murky, discouraging period.

Now the American in me says, “See? Times do get better. Even in what appears to be our darkest hour, there will one day be a better tomorrow.” However, the ancestral Irish blood in me simply counters, “What’s the point? Once we emerge from a recession, the only place left to go is right back into one.” (Damn my mother’s Irish roots.)

Still, I’m an American first and foremost, and I am confident a brighter day awaits. And knowing that our industry finds a way to persevere in times both good and bad makes me evermore optimistic. What a bunch of tenacious street fighters we are, riding the never-ending rollercoaster of fashion while absorbing body blows from whatever an unforgiving world economy—or natural disaster—hurls at us. If you are reading this, congratulations on being one of the survivors. If the past year didn’t knock you out, then, as Mick Jagger sings, “You must be tough, tough, tough, tough, tough…”

The same can be said of Footwear Plus. Let’s face it: Retailing and magazine publishing have been at the top of the Great Recession’s hit list. Yet here we stand 20 years later: older, wiser, with a few scars, but—if I do say so myself—better than ever before. One of the beauties of magazine publishing is that we can reinvent our title every month, and, at the same time, we accumulate knowledge. So 200-plus issues and oh-so-many trends and shoe styles later, Footwear Plus has covered our industry in-depth, beautifully, and—as its original mission statement proclaimed—unlike any other publication, past or present.

We’ve documented the bells-and-whistles athletic shoe era, the heavy chunkiness of grunge, the anti-tech retro and skate era, the hip-hop nation’s influence on street fashion, the “Sex and the City” glamorization that made Manolo and Jimmy household names, and the growing focus on the great outdoors. We’ve followed fashion’s flow between utilitarian styles (think wellies, Crocs and Uggs) to simplistic designs (ballerina flats, gladiator sandals) to loud-and-proud style statements (tattoo prints, oodles of jewels and luxurious exotic materials). We’ve watched flip-flops and boots become a 24/7 footwear option; the explosion of the rocker-soled wellness craze; and sustainability become an industry-wide concern. Trade show to trade show, we’ve witnessed trends, from fringe to fur to over-the-knee heights, wax and wane. And we’ve never dismissed a shoe without giving it the benefit of the doubt. That’s because we have always believed the final say is up to the retailer, our industry’s first customer. That said, we hope our extensive market research, analysis and exclusive visual presentation provokes, prods and inspires the entire buying process.

In addition to reflecting the beauty and artistry we see in so many designs, we have made it our goal to lend a helping hand through solution-oriented articles and to include the human element whenever possible. This is at the root an industry of people—people who happen to make shoes and sell them under brand banners. It has been a privilege and a pleasure getting to know so many of the individuals behind these shoes over the course of my 17 years working in various capacities at Footwear Plus. It’s a business filled with all types: creative thinkers, number-crunchers, go-getters, comedians, (a few real characters) do-gooders, artists, dreamers, innovators and copiers. And I’ve enjoyed interacting with them all.

To anyone who might think I’ve spent a long time at one publication, my answer is: You have no idea about the pace of change in the footwear industry. It switches direction almost daily, and my job follows suit. Besides, why change when you are having fun and enjoying the company of the people you cover?

By the way, I attribute my dedication and tenacity to the German blood in me. My father is an 83-year-old architect who still works seven days a week because he loves his job and, well, that’s the German way. It’s really no different here. Like father like son, they say. —Greg Dutter