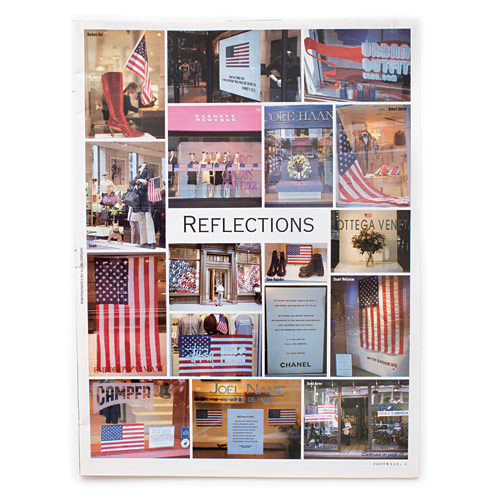 I remember the day like it was yesterday. The wail of sirens, the black and then reddish-brown smoke against a brilliant blue sky, and the awful stench that drifted northward on a late summer breeze that evening. I remember the numerous ambulances lined up in Central Park in the immediate days after the attacks, along with their idling EMT workers ready to rush down to the site on a moment’s notice, but there wasn’t much rescuing going on.

Like pretty much every New Yorker that morning, I remember exactly where I was and what I was doing (bike riding in Central Park) when those two planes struck the Twin Towers. One of the things I remember most was the missing person signs that sprang up all over the city—ones posted hastily in subway stairwells, taped to streetlights and those that were clipped to fences and flapped loudly in the wind. I remember the hundreds that lined the wall of a rescue and recovery staging area along the West Side Highway. Hauntingly, the signs stayed up for weeks. It was a daily reminder of innocent people—many of whom were smiling in those snapshots—who went to work one day but never returned to their homes and families. I remember the day a few weeks later when I was running late to meet my wife for dinner at our favorite diner on the Upper West Side. When I bounded out of the subway she was crying because she feared something might have happened to me. It’s an amazing feeling to have someone care for you like that, but it hit me again how devastated the families of the victims must feel. Their loved one will never hop out of a subway, never walk through the front door or call again.

I remember how many in our industry felt, and rightfully so, that it was inappropriate to promote the selling of shoes in the immediate aftermath. We captured the mood beautifully in a page we called “Reflections” that ran in the following month’s issue. The collection of store window displays that paid tribute to heroic rescue workers, remembered those who lost their lives and celebrated patriotism was tremendously powerful. We have written, edited and designed thousands of pages in the ensuing decade, but that page is the one I remember most.

The world has changed a great deal over the past 10 years, but much remains the same. Millions are starving to death in Africa, there’s a nuclear-armed kook still running North Korea (millions of his people are starving too), Israelis and Palestinians are once again killing each other, and Mother Nature continues on her path toward a doomsday scenario. Throw in our nation’s two endless wars, unexpected earthquakes and a tsunami in Japan, and the ongoing worldwide fallout of the Great Recession and things look pretty grim.

I recall the days, weeks and months after 9/11 as dark and full of despair, too. Yet somehow we survived. And it’s not like the past decade has been all bad. There have been a lot of bright spots. From a personal perspective, I became a father 13 months after the attacks, and I can’t imagine a world without my daughter. Taking a broader view, democracies are vying for birth across the Middle East, medical science continues to break new ground and the social media revolution has brought the world closer together. It has increased communication exponentially, helping to shed light on the fact that we are all pretty much the same. That instills hope that we can settle our differences, learn to peacefully coexist and work toward a common, greater good. Erecting walls—literally and figuratively—between nations, races and religions is not the answer. Now if we could only get our own government to embrace a similar philosophy, we might really be on to something.

In the meantime, here’s to remembering the lives that were forever altered on 9/11. I, personally, will never forget. —Greg Dutter