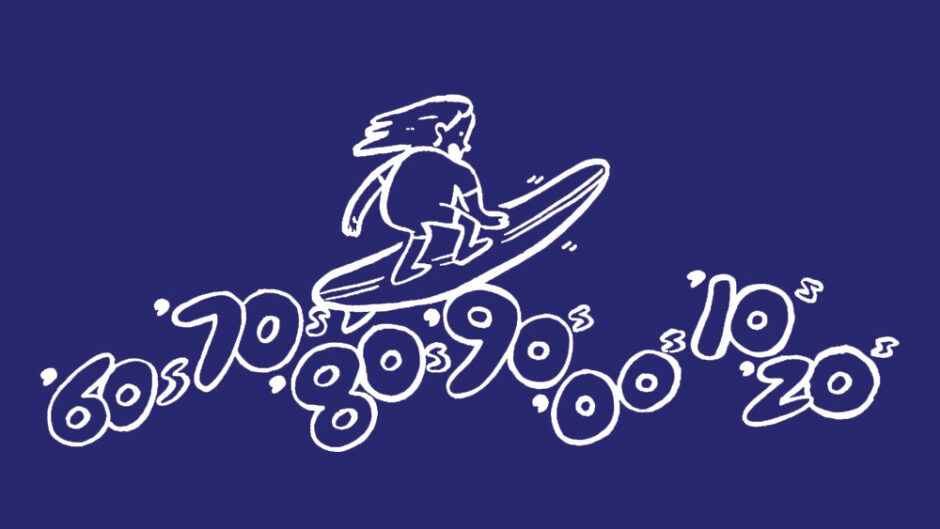 “Time is a train/Makes the future the past”...

“Time is a train/Makes the future the past” is a couplet in the U2 song “Zoo Station,” the opening track on the band’s 1991 landmark album Achtung Baby. I’ll confess, though, it took me a while to “hear” that poetic nugget regarding time’s endless express train through history—mainly because I was so taken aback by my favorite band’s discordant industrial new sound, which rattled my senses like a steel factory gone haywire at first listen. But that song and all the others on that record quickly grew on me. Personally, it marked an official change in decades—that sound, the band’s new wardrobe, the fact that it was recorded in Berlin, where the wall and Communism had recently crumbled…all signaled that the ’80s were, indeed, kaput. Hair bands were toast. Flannel replaced spandex as Nirvana’s culture-shattering Nevermind—also released in the fall of 1991—ushered in the Grunge era.

We count years and bracket them in decades, centuries and millennia, but there really are no sharp cut-off points. The passage of time is not that neat. For example, some say the aughts officially ended when former President Barack Obama announced to the world in May of 2011 that Osama Bin Laden was dead. Others consider the end of the ’60s to be 1973, when American troops pulled out of Vietnam. And the ’80s kicked into gear when Ronald Reagan took office and Iran freed the American hostages in January 1981.

Now here we stand collectively at the starting gate of yet another new decade. The last one seems like a blur, a feeling that seems to speed up as one ages. (My daughter was in grade school at the start and by this fall she will be in college. Where did her childhood go?) From a much broader perspective, we entered the decade still licking our wounds from the Global Financial Crisis and are exiting it with the world more divided politically, socially and environmentally than it was 10 years ago. The discord in our country feels like the same old song and dance—one that is played. Enough about warring elected officials refusing to see eye-to-eye on anything, let alone feign a willingness to meet somewhere near the middle for potential solutions rather than standoffs. The majority of Americans, the purple masses, must make their voices heard. Of course, that would be more likely to happen if we had a charismatic leader who could tap what I believe to be a rich vein of pragmatic common sense. Anyone?

From a footwear fashion perspective, the past decade frequently traveled back in time, cruising through the’60s and ’70s (repeatedly) and closing out with nostalgic spins through the ’80s and ’90s. (Apparently, one can never get enough neon.) Pundits say this love of nostalgia provided solace in a world filled with fear and instability. Consumers craved it, even if they didn’t necessarily ask for it. Others argue that, amid epic retail consolidation, no one dared risk attempting something new—mainly because it has a snowball’s chance in a California wildfire of ever getting into stores.

Maybe that’s one of the factors fueling the success of heritage brands like Blundstone, Dr. Martens, Birkenstock and Vans, the 2019 Plus Awards “Brand of the Year” nominees. Birkenstock and Blundstone boast a combined history approaching 400 years! That’s some serious heritage consumers are buying into. These brands’ success comes despite the so-called retail apocalypse, which looks to be the biggest industry-related story of the past decade—far bigger than the dad sneakers craze, which is really an extension of the much bigger Normcore craze that was officially coined in 2013. But I would argue the craving for brands rich in authenticity also stems from the fake news epidemic that’s been sweeping society, thanks in large part to social media platforms that spread rumors and lies faster than (too many) coin-operated influencers can manufacture them. Consumers have never really wanted to buy the hype, and with access to tools that let them do their own vetting and become much better informed, they no longer have to.

Blundstone CEO Steve Gunn, the subject of this issue’s Q&A (p. 12), believes better-informed consumers represent a macro shift in shopping behavior that won’t change anytime soon. He recalls his twentysomething wardrobe days—a closet full of fleeting “I thought I needed but didn’t” items; today’s consumer can avoid such sartorial regrets. Gunn says consumers can better research before buying, seeking out the truth about quality and whether a brand is a good steward of sustainability and corporate social responsibility. This bodes well for Blundstone, which is celebrating its 150th anniversary this year, and anyone else walking the walk. Poseurs beware.

As I gaze into the rearview mirror of the ’10s, I see plenty of good and bad—just as I have for every decade that preceded this one. None of them have been perfect. For every “Gangnam Style” fad (July 2012), there’s an ice bucket challenge craze (summer of 2014). For every Unite the Right rally like the one in Charlottesville, VA, in August 2018, there was a Women’s March (January 2017) and #Me Too movement that blossomed. Looking ahead, I hope the upcoming ’20s roar—in a good way. I hope the good outweighs the bad and that we find a way to adapt, survive and thrive collectively. In the meantime, I’m hip to what Bono sings in the opening stanza of “Zoo Station”: “I’m ready for what’s next/I’m ready to duck/I’m ready to dive/I’m ready to say/I’m glad to be alive/I’m ready/I’m ready for the push.” Happy New Year!