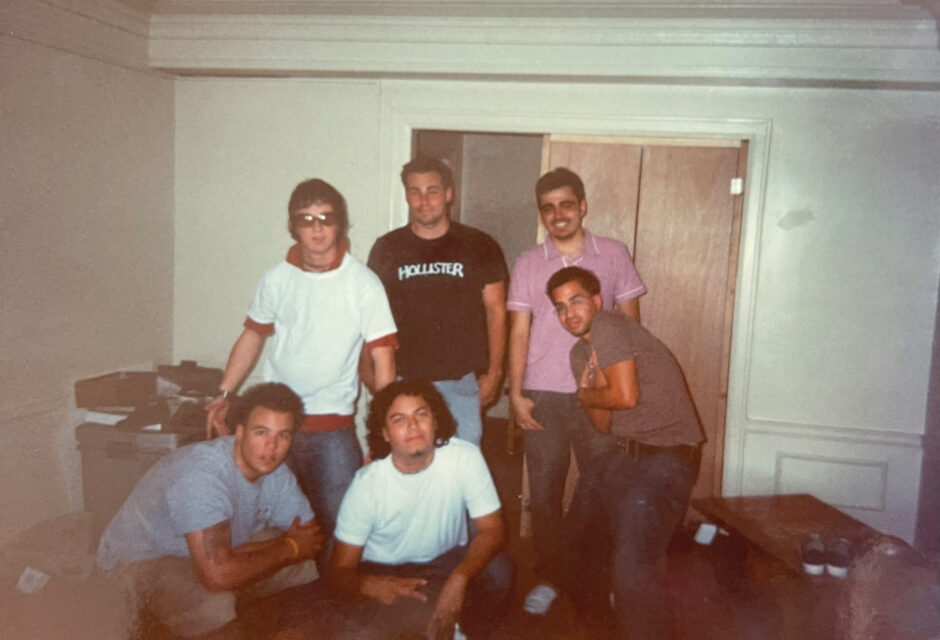 Rommel Vega, founder and CEO of Holo Footwear, reflects on a career journey of one-way tickets, roadblocks, side hustles, breakthroughs and entrepreneurial success.

Hola Rommel, I’m writing to you from the future! It’s 2022. You just launched your own company, Holo Footwear! Can you believe it?! Probably not, since I know a lot of things don’t make sense to you right now. But, like the Nipsey Hussle song, you’ve got to always Hussle & Motivate. It will eventually all come together. Over the next 20 years, you’ll experience an amazing life journey—one that kicks off with a one-way plane ticket from Miami to Detroit.

It’s the summer of 2002. It’s 3:45 a.m. You’re getting ready to jump on a Northwest Airlines flight to Detroit. (Heads-up: Northwest is now called Delta Airlines). It’s the biggest decision in your life so far. You’re racing with emotions—excited, afraid, not sure what will come of leaving a very traditional Latino home to pursue your design dreams at the College for Creative Studies. This is only the second time you’ve ever been on a plane! (The first was when your family emigrated from Nicaragua to the U.S.) It’s the first time you’ve ever been away from home! You don’t have any room for error. Mom and dad are sacrificing a lot for you to chase your dream. The good news is Jose, Andre and Alfred—your closet friends in high school—will be your roommates. You’re not alone! (Spoiler alert: These guys all gone on to successful design careers.)

Lesson one of college: Accept failure. Freshmen year flies by. You meet many incredibly talented people, some of whom become prominent designers in the automotive industry. Sophomore year, however, is one of the most difficult and disappointing times in your life. This is where I implore you to Hussle & Motivate! Don’t let the “NO” keep you down—like when you rip open that letter from Nike only to learn that you didn’t get that summer internship with Jordan Brand you so desperately wanted. You’ll also get turned down by Reebok, Adidas and Puma. It looks to be a cruel summer. All your friends will be interning at cool companies. Meanwhile, you’ve been accepted for an internship at Moen, designing faucets in North Olmstead, OH. But don’t be a drip. Take that internship. Moen will teach you to never take faucet design for granted.

Next stop: Dallas—on another one-way ticket. Congratulations, you graduated college! Mom and dad are so proud! Be happy, even though you’re bummed that your senior showcase failed to generate job offers from Nike, Adidas, Puma, Reebok or any footwear company, for that matter. Just be happy you received an offer from Fossil to design women’s watches. It may not be the footwear job you so crave, but it’s a job. Also, go easy on yourself because—another spoiler alert—you’re going to have a very successful footwear design career. You don’t see it now, but your big break is coming soon. You just have to Hussle & Motivate. In the meantime, Fossil will teach you important manufacturing processes that will take you a long way in the future.

That future begins with a call from Jesse Daniels, a category designer at Puma and former college classmate. He informs you about an opening and that he can, at least, get your portfolio in front of the right person. It’s a good thing you took that part-time job at that Puma outlet store—a side hustle to your Fossil gig. You brush up your portfolio for that all-important interview. This is you’re Eminem moment: Lose Yourself becomes your anthem. You listen to it on repeat on your trip to Boston.

Congratulations! Your “one opportunity to seize everything you ever wanted” is finally captured! You start out by designing running shoes, reporting to Dave Dombrow, who later moves on to Under Armour and then launches Speedland. Your entire world opens up. You travel to Germany, Vietnam and elsewhere with a team of talented coworkers. And while that team will soon break apart like NSYNC, don’t worry because your foot is now in the door to this incredible industry. You’ll go on to design for DC Shoes, Columbia Sportswear, Keen and Merrell. You’ll relocate to the West Coast, residing in Portland, OR. No, you won’t work for that company, but you’ll soon launch your own outdoor lifestyle brand nearby.

It’s called Holo, named after the (current) Holocene epoch. It’s a brand recipe of sustainable design, attainable pricing and inclusivity. It’s a reflection of your unique career journey and all the key ingredients that you’ve felt have been missing. Your path and purpose have always been different. Lots of people tell you, “No, that can’t be done. You, especially, can’t do that.” (Read between the lines on that last statement.) Still, you persist and persevere. Overcoming obstacles builds the thick skin you’ll need to launch Holo.

On that note, so far, so good! Holo is rapidly gaining traction. We’re now sold at Nordstrom, REI, Macy’s and many leading specialty stores. We’re living the dream!

Parting advice: Enjoy the journey, despite its unexpected downs, twists and turns. You’ll even learn to love the thorns that prick you along this path. They are the scars of a survivor—someone who is always willing to Hussle & Motivate. That’s your personal anthem!