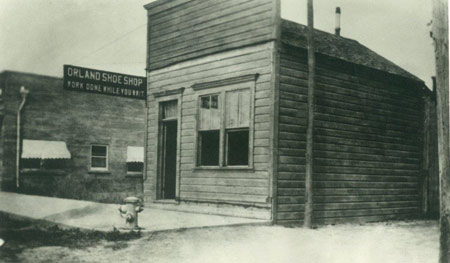 Turn of the Century

Marking its 100th anniversary, Johnson’s Shoes looks back on generations of family dedication that has enabled the California-based comfort chain to survive and thrive, overcoming numerous challenges along the way. One hundred years ago, Babe Ruth made his major league debut with the Boston Red Sox, Henry Ford jumpstarted the Industrial Revolution by launching his $5-a-day production line and Louie Johnson opened his own cobbler shop. Although these events have little in common aside from the year they happened (1914), each is uniquely American. Ruth went on to become a baseball Hall of Famer, solidifying the sport as “America’s pastime.” The Ford Model T revolutionized society by putting millions of Americans in the driver’s seat. And Johnson’s Shoes—a family-owned business that began in Orland, CA—carved out a unique place in footwear retailing history.

Still family-owned and operated, the thriving five-store comfort chain in many ways epitomizes the American dream. Johnson’s weathered some formidable storms and setbacks: The Great Depression, World War II, the Great Recession, and the rise of malls, discounters, big-box formats and the Internet. Boom and bust growth cycles nearly spelled doom in the early ’90s, but the company kept its doors open. Sure, the format and the number of stores varied (it peaked at 50 about 25 years ago), but what business hasn’t?

Current president and third generation shoe man Don Johnson should know. He has spent his entire career—40-plus years—working in the family business alongside his grandfather, father, aunts and uncles. He is now watching with pride as the fourth generation of Johnsons (his daughter Valerie and nephew Ben) learn the trade. One day, either may take over the reins.

As a newly minted college graduate and aspiring accountant, Johnson never planned on a lifetime in the family business when he joined in 1969. But, “you come to know where your place is,” he reflects. “As a result of my grandfather, father, uncles and aunts who worked in our stores, I came to value a family business and the area where we lived. I thought it was my destiny.” Today, Johnson runs the stores along with his two younger brothers, Marty and Scott. The Johnson family, he says, extends to all the chain’s employees. The feeling seems to be mutual, given that the stores’ managers and full-time employees have been with the company on average more than 10 years.

The chain’s current comfort format is right in step with its family-values approach to business, according to Johnson. “We’re buying the bread-and-butter footwear for Middle America,” he says. “Our shoes have moderate fashion appeal, but we mainly focus on comfort, durability and fit.” The chain caters primarily to a rural, agricultural-based demographic that seeks versatile footwear to meet the needs of their active lives. Johnson’s shoes have to work for customers, many of whom travel miles to reach its stores, located in northern California’s Chico (two locations), Redding and Susanville as well as Medford, OR.

While key brands include SAS, Dansko, Ugg, Keen, Clarks and Merrell, the chain is always on the lookout for new ones to add to its mix. In the last year, for example, Johnson’s added Alegria and Cobb Hill, and sales for both have taken off. “You need to take risks,” Johnson says of his shoe-buying philosophy. “But they need to be carefully evaluated risks. We choose what we think our customers would like based upon listening, reading, watching and looking at things going on in the market.” From there, he says, they “build on it or get out of it. [We] try it on and then manage that inventory as soon as it comes in.”

Johnson developed his current approach to inventory management in 1991, following a visit from a consultant. “The consultant said, ‘Those aren’t shoes on the wall, those are dollar bills. They need to be in circulation; don’t just let them sit there.’” He immediately went to work adjusting inventory methods, adapting to the system known as FIFO (first in, first out). “We would stamp the arrival date on each shoe box,” he says. “After three months, we would go through the wall and decide to put on clearance anything that had been there longer than that. We remembered to always watch our dates and get rid of them to get dollars back.” He adds, “Stamping the date and clearing out slow movers was the biggest and best business lesson I ever learned.”

One needs to go back to 1909 to trace the real roots of Johnson’s Shoes. That’s the year Louie Johnson Sr. came to Ellis Island from Sweden at age 14 to join his sister in St. Joseph, MO. His brother-in-law worked as a cobbler and Johnson went to work helping him at his shop, where he learned the ins and outs of making and repairing shoes. When Johnson fell ill, his older brother, who was living in Orland, CA, thought the warmer weather would be good for his health. Soon after arriving in the Golden State, the two brothers opened Orland Shoe Shop (years later the name changed to Johnson’s Shoes), a shoe repair shop with the motto, “Work done while you wait.”

The shop got by during the Depression, partly kept afloat by the Works Progress Administration (WPA) under President Franklin D. Roosevelt’s New Deal. During World War II, Johnson’s Shoes repaired footwear for the U.S. government. When Johnson’s son, Louie Johnson Jr., returned home safely from the war, he went to work with his father and the business was renamed Johnson and Son. During the same time period, the shop began selling nascent brands such as Red Wing.

Louie Johnson Sr. worked six days a week until he was 81 years old and he retired in 1976. “I was able to work with him daily for about seven years,” Johnson says. Louie Johnson Jr. had the same fierce work ethic. Though he retired officially in 1991, he remains involved with the stores.

Throughout its existence, Johnson’s Shoes has faced challenges. Today, they include high rents, increased competition and finding trustworthy employees. But none compare to the epic woe the business faced in the early ’90s. Don Johnson had just become president and the chain was at its peak, with 50 stores, including an array of family-named outlets, concept stores and athletic shoe stores. The business had mushroomed into a corporation, employing more than 200 people and profiting annually in the millions of dollars. Johnson prided himself on expansion and was constantly exploring ways to grow the business. That is until one day, the bank called about a loan that needed to be repaid. Johnson had two options: repay the loan or file for bankruptcy. “We were in a tailspin,” he remembers. The loan was too high to pay off at once, but Johnson couldn’t fathom the idea of filing for bankruptcy. “I remember going to see an IRS agent and as they were interviewing and videotaping me, the agent said he’d like to speak with me privately,” Johnson recalls. “He said, ‘If you just file for bankruptcy, this will all go away.’ And I said, ‘That’s just not a word in our vocabulary. We believe we’ll be able to pay off our bills and that’s what we’re going to do.’” Johnson’s frankness must have resonated with the officer, and together they came up with a solution. Instead of paying back the allotted $5,000 per month, Johnson convinced the agent to let him pay $1,000 a month. He promised to close some stores to avoid giving up on the business entirely. “I’ll take the blame personally,” Johnson says in hindsight. “I had a desire to get big, but my reach extended beyond our grasp. But, boy, did I learn about financial management. In the end, we worked through it.”

From 1991 to 2001, Johnson’s Shoes survived by selling assets, inventory and closing most of its stores. The family paid off its debts and rebuilt the business with a new comfort format in mind. They also learned to keep it simple. Johnson returned to the lessons his grandfather and father had taught him about running a successful business. “We now live by three basic retail laws,” he says. “Quality product, affordable price and caring service. If someone is unhappy or unable to find what they want, don’t react. Act. And always respond with care, first.”

Today, Johnson and his team focus on the future as well as the present—determining how to adapt to changing times and capitalize on the opportunities they may offer. For now, that means emphasizing the brick-and-mortar locations rather than delving into e-commerce. Setting up a meaningful e-commerce operation would require too heavy an investment in salary and inventory, he explains. “The way I see it, we’ve got plenty to do in our stores already to jump into online sales. Plenty of people still like to try shoes on and walk around in them before they buy,” he says. “And we’re here seven days a week, all year long to help them with any problems they might have.”

The company enjoyed a six percent profit increase in 2013—a success he attributes to having the right selection, the right price and caring customer service. He also credits 2013’s jump in profits to “freshness and rotation in our inventory management due to a consistent and professional selling team.” A weekly performance summary and periodic special incentives help employees stay motivated throughout the year. “We send out a daily sales report of how associates are doing compared to last year and we note the highest dollar and the top five highest sales of the day,” Johnson explains, adding that associates are rewarded with cash awards, discounts for friends and family and purchase perks at wholesale price points. He’s quick to add that sales reports are meant to be a friendly recognition, not a critique.

2014 is expected to be a good year sales-wise, but Johnson admits, “Things aren’t as strong as they were in 2010 or 2011. Independents are going to have a rough time.” He cites rising unemployment and lower regional incomes as factors that are putting a drag on sales. He has instructed his team to try to maximize sales among customers who come in to shop. “Our people are all trained in product knowledge and salesmanship, and that’s all we can ask for,” he says.

To mark the centennial milestone, Johnson’s Shoes is planning new advertising initiatives and a rewards program to bolster customer loyalty by rewarding shoppers with half off their seventh pair purchased. Four years ago, the store began advertising on TV, and a special 100th anniversary commercial has already hit the air. Johnson says TV advertising is one of his strongest forms of customer acquisition.

“We’re going to celebrate our anniversary in a way to hopefully sell shoes and not glorify ourselves,” Johnson says. “We want to use our 100th year as a reason for new people to come in and take a look as well as affirm with existing customers that we’re here and we intend to stay here.”