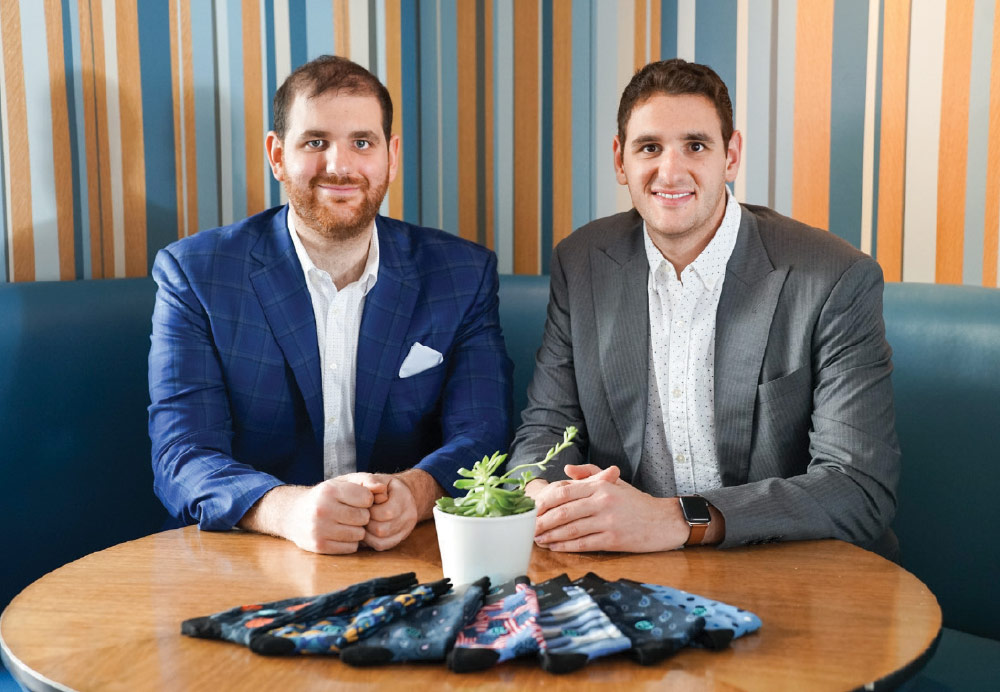 When Michael and Dan Friedman were handing out fresh socks and clothes to first responders working at Ground Zero after the terror attacks on 9-11, they never imagined it would plant the seed for Tall Order, the men’s sock company the duo and their mother, Lisa, launched in 2016. For starters, the twins were just 11 years old and doing whatever they could to help at the place where their father, Andrew, lost his life in the North Tower.

Giving out the socks was one of the most memorable acts that I can remember post 9-11,” Dan says. “With everything that came our way in those weeks and months afterwards, it felt really good to do something for the first responders who were working so tirelessly and vigilantly around the clock to try and recover anything that they could.”

In the years that followed the attacks, the Friedmans got on with their lives as best they could. Like their father, who was 6’5”, the twins grew—and grew. Dan and Michael, 6’9” and 6’11” respectively, graduated college and entered the corporate world. But something was missing in their day jobs—as well as their wardrobes. The work just wasn’t fulfilling on an emotional level and the brothers continued to search in vain for a decent pair of stylish socks that fit.

“I’m a size 16 shoe and Dan is a 15.5,” Michael says. “We can’t just walk into a store and pick something off the shelf because most stores only carry merchandise up to size 12, or maybe 13.” And of those few stores that might, Dan says the selection is often sparse, the quality low and the price high.

The Friedmans decided to take matters into their own feet, so to speak, building a company from scratch that would specialize in socks for big and tall men. Equally important, Tall Order would honor the memory of their father and his guiding principle of giving back by donating a percentage of annual profits to Tuesday’s Children (a charity that supports families impacted by terrorism, military conflict and mass violence) and first responders through the FealGood Foundation. What’s more, Tall Order’s logo—a bright blue emblem emblazoned on each pair that symbolizes the Twin Towers and sky on Sept. 11, 2001—serves as a reminder to customers to pay it forward and continue the Friedman family’s commitment to helping others.

“Tuesday’s Children is our go-to charity,” Michael says. “We have a minimum contract to donate a certain amount each year. And our FealGood Foundation sock [a limited-edition style, available in sizes 9–15 for $20] sees 100 percent of the proceeds go to the foundation. That charity is just near and dear to us. It means a lot to us to support them.” 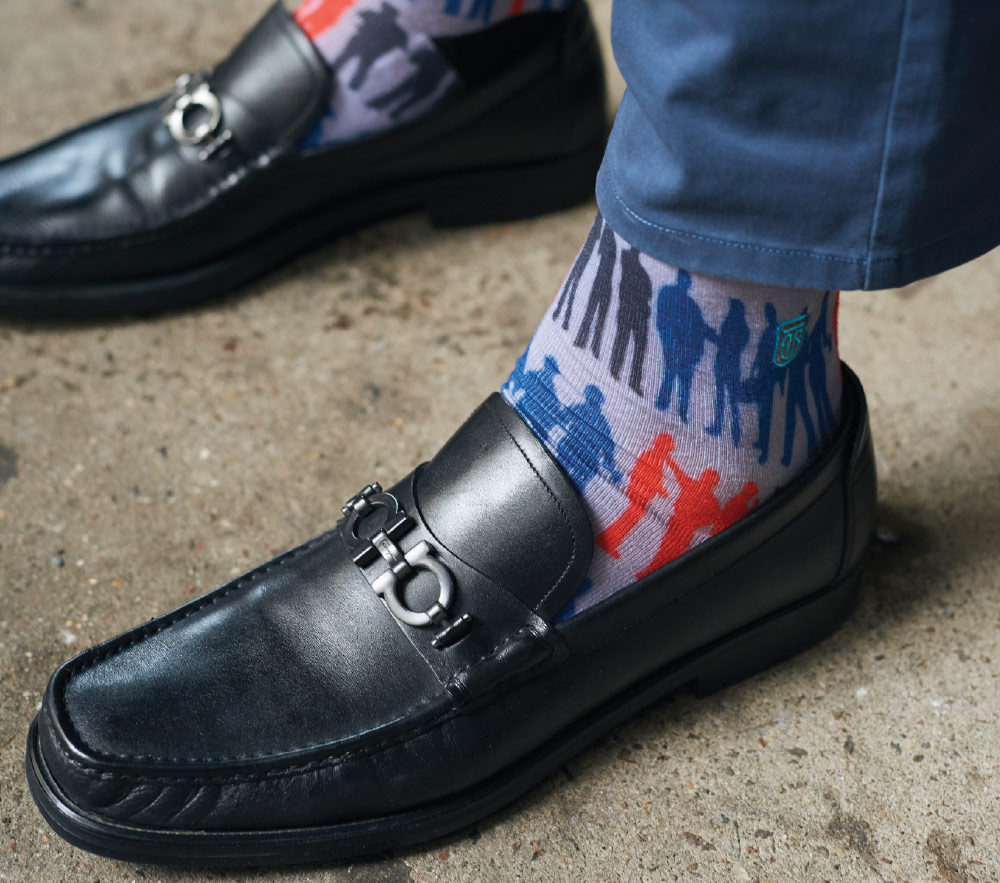 The FealGood Foundation sock sees 100 percent of the proceeds donated to assist first
responders injured in the course of their duties or within their everyday lives.

Of course, Tall Order’s good intentions wouldn’t amount to much if the socks (SRP $15–$18 per pair) were of inferior quality. But the brothers have put their own experiences to the wear test from the get-go. They knew exactly what was missing in terms of fit, durability and style. Need No. 1: Socks must stay up throughout the day. “We put extra elastics in the top band so that it stretches to fit even the widest calf and it doesn’t fall down for all-day comfort,” Dan says. “We also print our patterns rather than the traditional knit version that negates those loose threads on the inside. It’s completely smooth for better comfort.” And thanks to Tall Order’s recent licensing and shared services agreements with United Legwear & Apparel Co. (ULAC), the product will only improve and the selection become more extensive. “We’ve added cushioned soles, moisture-wicking fabrics, seamless toes and arch support,” Dan says. “We’ve got a wide array of classic, designer and novelty styles.”

ULAC will also help open doors for Tall Order as it takes over wholesale operations. Current distribution includes Macys.com, Kingsize.com, Westport Big and Tall and other specialty stores nationwide. Near-term targets include Kohl’s and DXL Men’s Apparel. Dan cites ULAC’s manufacturing and design capabilities as another big asset. “We plan to expand into low-cut and no-show socks and possibly underwear down the line,” he says. “The goal is to evolve into a ‘big and tall’ brand.”

Rachel Furer, senior vice president and employee number four of Tall Order, says ULAC is exactly what the start-up needs. “Having spent my entire career in accessories marketing and sales, I knew there was no better partner than United Legwear & Apparel Co,” she says. “They make superior products, manufacture with integrity and have the same mission to give back.” Isaac E. Ash, CEO of ULAC, concurs on the importance of giving back and cites the underserved market niche Tall Order addresses: “Strategically, Tall Order fills white space in the market for extended sizes, offering excellent product in an important but underserved segment. They complement our portfolio of brands and I’m excited for this business to really take off.”

The partnership will enable Dan to be more hands-on with product development and learn from ULAC’s talented team, while Michael cites the stability the company will provide. “When you start a company, you may think you have all the answers, but you really don’t,” he says. “Now we can project scale and growth thanks to the partnership with United Legwear. I’m excited about what the future holds.”

In the meantime, the twins take solace in knowing their father would be proud of their efforts. “First off, he would be happy that he’d have nice socks that fit properly,” Dan says, noting that select styles and patterns are named after Andrew’s best friends, who remain close to the Friedman family. “He’d be proud of that as well as our ability to use our socks to continue his legacy of giving back and bringing people together.” Michael adds, “It would have been really easy to go on a different path after losing him. I think our father would be over the moon right now seeing our strength, family closeness and what we are doing.”